SPRINGFIELD, Ill. (September 1, 2012) - Enormous amounts of rain as well as tornado warnings across central Illinois Saturday has resulted in the delay of this weekend's AMA Pro Harley-Davidson Insurance Grand National Championship presented by Motorcycle-Superstore.com and Lucas Oil races at the Illinois State Fairgrounds. However, all is not lost; the Springfield Short Track originally scheduled for today has been rescheduled for tomorrow, Sunday, September 2 and the Springfield Mile will now run on Labor Day, Monday, September 3. 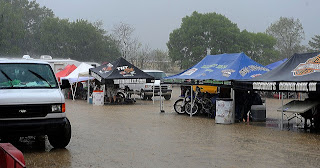 Race fans at Springfield got today what no one wants at a flat track race, and that was rain and lots of it.  The full weekend schedule has been revamped as today's activities at the track were canceled.  Photo courtesy of AMA Pro Flat Track.


"This is just a minor glitch in what is still expected to be an action-packed weekend of racing on back-to-back days at the Springfield Fairgrounds," said Dan Johnsen, Director of AMA Pro Flat Track. "A big thanks to the IMDA for all of their efforts in getting the tracks prepped."


Practice for the final Short Track event of the 2012 season will begin tomorrow at 1:30 p.m. with opening ceremonies scheduled to begin at 5:00 p.m. An updated event schedule can be downloaded at http://www.amaproracing.com//assets/2012-AMA-Pro-Flat-Track-Springfield-ST-Revised-Schedule.pdf.


The Springfield Mile will be bumped back a day and is now slated to run on Labor Day, with opening ceremonies at 12:00 noon. The revised event schedule for the Mile can be downloaded at http://www.amaproracing.com//assets/2012-AMA-Pro-Flat-Track-Springfield-Mile-Revised-Schedule.pdf.


All signs point to this storm blowing over and the engines being hot all day tomorrow for a clean, exciting day full of action packed racing. The legendary Springfield Mile will put a stamp on this Labor Day weekend and we don't expect the weather to present any furthers issues.