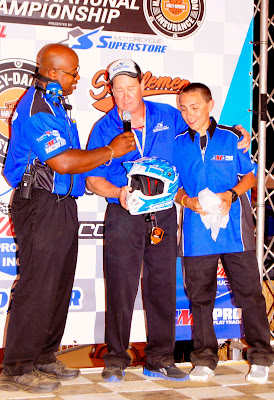 AMA Pro Flat Track announcer Mylas Copeland helps one of the Motorcycle-Superstore.com reps with a special Bell Helmet award for Tyler Brintlinger at round 3 of the 2012 AMA Pro Flat Track Harley-Davidson Insurance Grand National Championship presented by Motorcycle-Superstore.com season at the Springfield TT on May 26.  Due to his enthusiasm and great love of the sport, Tyler was awarded the signature helmet for all of his hard work and outstanding efforts that he had put in, on and around the track in helping introduce the riders, helping the AMA Pro Flat Track trophy ladies with the t-shirt cannon and various other duties which he obviously loved and was so good at.

It is with great sadness that we report that young Tyler and his father Dave, were tragically killed in an auto accident late yesterday on their way home from the Knoxville Half-Mile on Saturday, September 8.  Dave's twin brother, Darrell was in serious, but stable condition as of press time this morning according the the Danville Commercial News online account of the accident.  The accident occurred approximately 6 miles east of the Illinois/Indiana State line as they were returning to their home in Ohio.

Tyler, who was best known for his great smile and uber-level of enthusiasm around the track, was one of the hardest working young men around.  Excelling at his duties of helping to introduce the riders to the grid during rider intros as well as helping the trophy queens fire the t-shirt cannon into the stands, was awarded a special-design Bell Helmet, courtesy of AMA Pro Flat Track sponsor, Motorcycle-Superstore.com at the Springfield TT in late May.  The young man's smile and surprise are highly evident in the shot above, taken as Tyler was given his special award for all of his help around the track.

Although I never knew either one personally, I can attest to the tireless efforts of both at each and every event over the course of the last three seasons, and young Tyler was without a doubt one of the future people of the sport in terms of running the show.  I hope everyone will be able to remember him as I do, with that great and happy smile on his face as the one displayed above when he was awarded his special helmet over the Memorial Day Weekend.

Here's wishing a full and fast recovery to the surviving member of the Brintlinger Family, Darrell.  And God Speed to Tyler and Dave, two of the finest members of the AMA Pro Flat Track Blue Crew, both of which will be sorely missed.

RIP Tyler and Dave, the man above just got two very special people!

DAYTONA BEACH, Fla. (September 10, 2012) - AMA Pro Racing is deeply saddened by the passing of Dave Brintlinger and his son Tyler Brintlinger. Dave and his twin brother Darrell have been AMA Pro Flat Track officials for the better part of two decades and 15-year-old Tyler had been a junior member of the official crew for nearly his entire life.

Dave, Tyler and Darrell Brintlinger are pictured from an AMA Pro Flat Track event.  Tragedy struck the family on their return home from the Knoxville Half-Mile when they were involved in an auto accident, claiming the lives of Dave and his son, Tyler.  Darrell is recuperating in the hospital as of press time.  God Speed and RIP Tyler and Dave, and get well soon Darrell!  Photo courtesy of AMA Pro Flat Track.

The three were involved in a vehicle accident near Danville, IL following the Knoxville Half-Mile. Darrell is currently recovering in a local hospital.
"There are no words to express the sadness in our hearts," said Dan Johnsen, Director of AMA Pro Flat Track. "Dave and Tyler were always ready to help and came to the track with a smile on their faces every event. Their contribution made a major impact on this sport. They will be dearly missed."


In lieu of flowers, contributions can be made to: