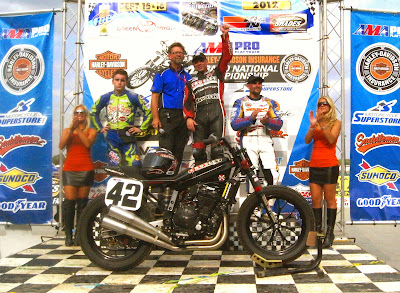 Round 13 of the 2012 AMA Pro Flat Track Harley-Davidson Insurance Grand National Championship presented by Motorcycle-Superstore.com season saw Bryan Smith take the #42 Crosley Radio/Howerton Motorsports powered by Eaken Racing Kawasaki to his second win of the season aboard the freshly updated parallel twin after having taken his first of the season (and the new-for-2012 team) at the Sacramento Mile in late July.

Sammy Halbert #7 and Jared Mees #9 flank Flyin' Bryan on the podium at the Springfield Mile II on September 16 after what could best be described as a 25-lap power struggle between the XR750-mounted 2nd and 3rd-place finishers and the potent Kawasaki that is enjoying it's first full season in Twins Series mile competition in The Rolling Thunder Show.

Now you can get a chance to catch up with the action in the greatest racing series on wheels in the world as MavTV and NBC Sports today announced along with AMA Pro Flat Track that the Sacto Mile event will be broadcast for our viewing pleasure.

So check out the full press release below thanks to AMA Pro Flat Track and get your DVRs programmed for this weekend's airings and next week's replays of one of the great races in the 2012 AMA Pro Flat Track Harley-Davidson Insurance Grand National Championship presented by Motorcycle-Superstore.com season.

And while you are checking out the action on the tube you can also watch along online as the series heads to the return of The Santa Rosa Mile this weekend in round 14 of the series and it's first of three events on the West Coast to wrap up the great year of racing, unless you are heading that way or in the area then you definitely need to head to the track to catch up and check out the great weekend of racing going on in Santa Rosa.

Also, on Thursday October 4, MAVTV will air the Sacramento Mile at 9:00 p.m. ET/6:00 p.m. PT with a reairing at midnight.
How to catch the action:
See NBC Sports' TV listings and channel lineup by going to http://nbcsports.msnbc.com/
Find out how to get MAVTV by going to http://mavtv.com/get-mavtv.html
NBC Sports Channels on Select Providers:
MAVTV is available nationwide on:
Please check your local listings for a channel line-up to find NBC Sports and MAVTV. Search Lucas Oil Motorsports Hour or Motorsports Hour if you don't see the program listed.
Next Up
AMA Pro Flat Track is headed to the Santa Rosa Mile. Event Info | Tickets
Stay connected with AMA Pro Flat Track at www.twitter.com/AMAProFlatTrack and www.facebook.com/AMAProFlatTrackSeries.
Posted by Stuman714 in Indy at 9:36 PM