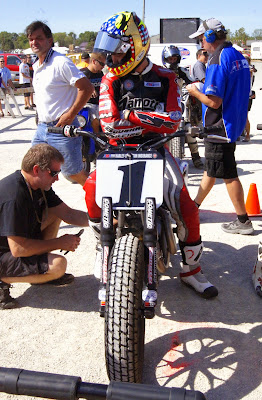 Round 10 of the 2012 AMA Pro Flat Track Harley-Davidson Insurance Grand National Championship presented by Motorcycle-Superstore.com season at the Lucas Oil Indy Mile saw 2-Time and defending AMA Grand National Champion Jake Johnson suffer somewhat of a set-back to his plans to make it three-in-a-row in his run for the #1 plate.

Winning the fastest heat on the night at the Indiana State Fairgrounds, Jersey Jake looked to be in control from the start of the 25-lap National main as he jetted out to an early lead.  But within a few laps, the lightning fast #42 Kawasaki of Bryan Smith had chased him down and a duel ensued throughout the mid-part of the race.  And in a move not seen out of the Pennsylvania resident in over two years, Johnson lost his brakes while dueling with the Howerton Howitzer and threw it down out of turn three, ending his string of solid podium finishes on the season since the Springfield TT in late May, and putting a dent into his plans for a three-peat.

But alas, all you Jake Johnson fans, all is not lost and the quiet but confident champion has literally and historically not even begun to come into his own on the track in his prior runs for the championship in the season into well past the half-way mark.  Although we are down to just six rounds in the 2012 calendar of racing in The Rolling Thunder Show, I can guarantee you that the #1 Zanotti Racing/Schaeffer's H-D/Boughner Racing/Arai-sponsored team and rider are not done in their quest to add themselves to that elite group of men, riders and champions who have not only garnered a triple-dose of championship laurels, but done so back-to-back-to-back.  And you NEVER count out the man with the #1 on his back until the final checkers have flown.

(The shot above, taken at Indy on August 18 during round 10 shows Johnson checking out crew chief Ted McDermitt's final touches to the Dave Zanotti-owned and run bikes just before first practice was ready to roll out at the Indiana State Fairgrounds.  Zanotti can be seen in the white polo shirt just behind JJ and Ted.)

With what was originally scheduled as round 13 of the season tomorrow in the return of the series to the Knoxville, Iowa half-mile, the home of the Sprint Car Hall of Fame and Museum and the Sprint Car Racing Capital of the World, Johnson and the rest of the stars in the greatest racing series on wheels in the world will duke it out again on the ultra fast surface in the middle of the Hawkeye State.

In last year's run to the championship, Jersey Jake and current points leader Jared Mees went at it bar-to-bar for the final laps of the race to end in a virtual dead-heat that saw Mees take the win by a pet's hair.

Will the same result happen again this year, or will Sammy Halbert be able to close the gap on Mees in the points after leap-frogging Johnson at Indy with his first-ever mile win?  Or will someone new come out of the mix to stir the pot and give the dueling leading trio a run for their money?

Only time will tell, and practice gets underway tomorrow at 4:30 EDT/3:30 CDT. 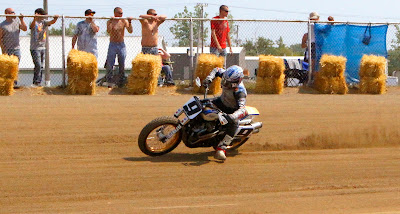 Jared Mees has done a yeoman's job of keeping himself in the hunt for the 2012 AMA Grand National Championship by bringing home solid results and a win at Hagerstown earlier in the season to show he's ready to bring home the lion's share of the crown jewel of flat track this year on the #9 Rogers Racing/Blue Springs H-D/Saddlemen/National Cycle-backed and Brent Armbruster-tuned XR750.

Jammin' Jared's '09 & '11 Twins Series Championship have put him in the position of vying for the big one as for the second year in-a-row the Michigan resident has led and gained points in the overall chase for the 2012 AMA Grand National Championship.  Taking fulll advantage of Johnson's missive at Indy, Mees' actually kept it withing smelling distance at Indy to grab the last spot on the podium behind winner Halbert and first-time Expert podium finisher Brandon Robinson, and gained a point in the overall over new 2nd-place in the overall standings Slammin' Sammy.

Look for The Jammer to be at the front on Saturday afternoon where he returns to the site of one of his most spectacular wins from last season and tries to add to that current lead at the end of the day in Knoxville.

You can check out the full press release below thanks to AMA Pro Flat Track and you can follow the day's action via the Live Timing and Scoring link here:


Here's the day's schedule of activities at the Sprint Car Capital of the World, where the stars of The Rolling Thunder Show will display racing that puts anything else to shame on the fast half-mile in Knoxville, Iowa:

And you can keep up with the full results here, thanks again to the great Blue Crew from AMA Pro Flat Track:


KNOXVILLE, Iowa (September 8, 2012) - AMA Pro Flat Track is bringing the "Greatest Show on Dirt" back to Knoxville Raceway this weekend for a one-day event on Saturday, September 8. Last year marked the return of the AMA Pro Flat Track motorcycle racing to the Sprint Car Capital of the World following a 15 year absence and the show was nothing short of a thriller; a large crowd witnessed Jake Johnson and Jared Mees battle it out down to the last inch of the 25 lap main event with Mees winning by an eyelash. With the 2012 rider championships and number one plates on the line for the AMA Pro Harley-Davidson Insurance Grand National Championship presented by Motorcycle-Superstore.com and Lucas Oil (GNC), this weekend promises to deliver the same jaw-dropping exhibition of two-wheeled speed and handlebar-banging action.
Once again this year, Mees and Johnson are at the top of the Series' leader board. Recently, South East Harley-Davidson's Sammy Halbert has also inserted himself into the 2012 points race and his third-place finish at Knoxville last year shows his potential to shake things up.
While the top three in points have their own race going on, there is a strong contingent of riders looking to make their mark on 2012. Three-time GNC champion Kenny Coolbeth, the only rider to participate in all of the Knoxville Nationals held to date (1995, 1996 & 2011), will be looking to get back to the front as he continues his comeback after suffering a broken leg in June. Bryan Smith, currently sitting fourth in the standings, has shown glimpses of pure domination at several points during the season and looks to put all of the pieces together Saturday night. 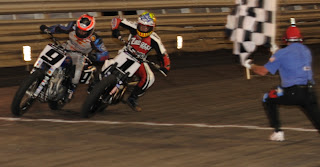 Jared Mees #9 takes the checkered flag by less than the blink of an eye over Jake Johnson #1 during the 2011 running of the Knoxville Half-Mile.  AMA Pro Flat Track photo by Dave Hoenig.
Historically, AMA Pro Flat Track's premier twin-cylinder class has been dominated by the venerable Harley-Davidson XR750, but recently the legendary orange and black has been challenged by entries from Kawasaki, Ducati, Triumph, KTM and Suzuki, giving race fans a variety of brands to cheer for. Henry Wiles is a non-Harley rider to look out for, as he is looking to improve on his recent fourth place finish at the Indy Mile aboard his Lloyd Brothers Motorsports/ Foremost Insurance-backed Ducati as he wraps up his first year on the potent Italian motorcycle.
After this weekend's event, the series heads back to Springfield, Illinois for the Springfield Short Track and Springfield Mile II September 15-16, 2012. Springfield will mark the last mid-west visit as AMA Pro Flat Track will then head to California and Arizona.
In addition to the twin-cylinder monsters of the Grand National Championship, fans can also expect to see the rising stars of the AMA Pro Motorcycle-Superstore.com Pro Singles class return in 2012. Featuring 450cc single-cylinder engines, the class serves as an entry level to the Grand National scene and often features some of the closest racing of the weekend.
Last year, history was made as Shayna Texter's charge through the 18 rider field had the crowd on their feet in Knoxville. Her hard fought victory over Briar Bauman (now competing for the GNC Rookie of the Year Award) marked the first victory for a female rider at a Grand National event. Texter notched her second win this year at the Sacramento Mile and plans on defending her Knoxville title aboard a Dallas Fort Worth Honda.
The Motorcycle-Superstore.com Pro Singles class is super competitive as the best young riders in the nation try to make a name for themselves, with many looking to make their way into the Grand National class.
An Iowa connection in this class has the Weirbach Racing Team (Ottumwa, IA) fielding a Honda for Californian Dominic Colindres. Colindres has posted one win already this year (Peoria, IL) after joining the team at mid-season and he currently sits sixth in the standings.
Michigan's Stephen Vanderkuur, Ryan Wells (New York), Jake Shoemaker (Pennsylvania), and Jason Isennock (Maryland) are bunched at the top of the point standings and are all within 12 points of each other as the young riders from all around the country chase the AMA Pro Motorcycle-Superstore.com Pro Singles Championship.
Practice is set to begin at 3:30pm with opening ceremonies set to start at 7:00pm.
Additional Event information
Posted by Stuman714 in Indy at 9:18 PM