Round 12 of the 2012 AMA Pro Flat Track Harley-Davidson Insurance Grand National Championship presented by Motorcycle-Superstore.com season gets ready to kick-off it's final Singles Series event of the year at the Springfield Short Track, as well as the final National for the foreseeable future on the Illinois State Fairgrounds Arena.

Henry Wiles again rode like the true champion he is and took the #17 Don's Kawasaki KX450F to his 6th win in-a-row at Springfield, making it 11 wins he has bagged in his career at the little track.  Coming off the line in fourth place, it looked like early leader Brad Baker on the #12 Brothers Powersports Honda CRF450R was finally going to bag his first National main event as an Expert, but Hammerin' Hank had other ideas as he worked his way around Briar Bauman #10Z on the Rod Lake Racing USC Honda and 2-Time and defending Grand National Champion Jake Johnson on the #1 Zanotti Racing Honda, and then grabbed the lead from Brad 'The Bullet' Baker with less then five laps to go to sail to another win.

Johnson ended up in 5th-place when Mees worked his way around after a heavy battle on the #9 Rogers Racing Honda to score a 3rd-place finish, which was enough to take the 2011 AMA Pro Flat Track Singles Championship.  Briar Bauman brought it home in 4th, with JD Beach on the #95 USC Kawasaki taking a hard-earned 6th-place.

The overall points were shaken up some when Sammy Halbert was forced to take a provisional and only carded a 14th-place, to slip 12 points behind 2nd-place man Johnson, as Mees still holds an 11 point lead over Jake.

The series heads across the fairgrounds for tomorrow's Springfield Mile II event.

You can check out Larry Lawrence's take on the action at Springfield here at Cycle News.com:

And here is the link to AMA Pro Flat Track's official event results: 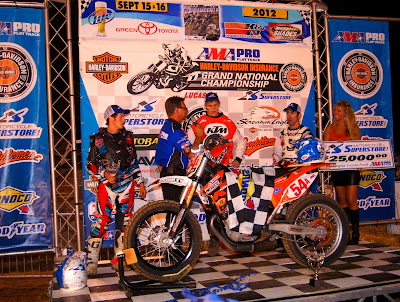 AMA Pro Motorcycle-Superstore.com Pro Singles Series winner Dan Bromley gets the interview treatment on the podium after the Springfield Short Track from AMA Pro Flat Track announcer Barry Boone.  Bromley took his #54A Bromley Brothers KTM Racing-sponsored KTM 450SX-F to the front at the start and led all 16-laps in the Pro Singles final inside the Multipurpose Arena on the Illinois State Fairgrounds.  It was Bromley's first-ever win in the series in his first year of having his Pro license and he helped KTM to garner their second win in the series this season after injured rider Gerit Callies had claimed his win earlier in the season.  Wyatt Maguire and William Cato flank Bromley on the podium for their 2nd and 3rd-place runs on the night.


Springfield, Ill (September 15, 2012) - Saturday's AMA Pro Harley-Davidson Insurance Grand National Championship presented by Motorcycle-Superstore.com and Lucas Oil was an exciting kick-off to an intense weekend filled with action-packed racing. Henry Wiles (Don's Kawasaki/Kawasaki) took the checkered flag by almost a full second and gave the crowd at the Illinois State Fairgrounds everything they could have asked for. It was Wiles' third win of the year and second here in Springfield. The win boosts Wiles to a second place finish in the GNC Expert Singles point standings behind Jared Mees (Montgomeryville Racing/Honda).


"It was back and forth and just an awesome race," said Henry Wiles. "I stayed low the entire time waiting for Brad (Baker) to go wide and when he did I just pulled the trigger and it paid off. It's been a phenomenal year and I want to give a shout out to my team and all of my sponsors. I'm glad I could go out there and ride for you guys." 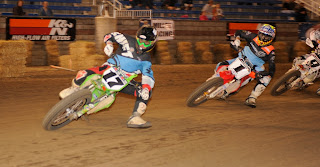 Henry Wiles #17 worked his way from fourth off of the start around early leader Brad Baker, Jake Johnson #1 and Jared Mees #9 to take his 6th-win in-a-row at the final Springfield Short Track on Saturday, September 15.  AMA Pro Flat Track photo by Dave Hoenig.


Brad Baker (Brothers Powersports/Honda) got the holeshot off the pole and led for the first 19 laps but surrendered his lead on lap 20 when he went a little too wide off of turn 2 as Wiles slid underneath him and never looked back. Once Wiles gained the lead, he was in total control the rest of the way as he beat second place finisher Baker by a total of .940 seconds.


The night was capped off by the crowning of Jared Mees as he is this year's GNC Expert Singles champion.  "This isn't the biggest accomplishment that I'm aiming for this year, but it's definitely a big one," said Mees. "I have to pat myself on the back for this, I worked really hard on the singles this year and this is a big victory for me and my whole team. It was only a six-race season, but it was a lot of fun."


It was all Dan Bromley (Bromley Brothers/KTM) tonight as he claimed the holeshot on lap one and never let up. Bromley looked sharper than he has all season and made a name for himself in tonight's intense showdown as he claimed his first career AMA Pro Motorcycle-Superstore.com Pro Singles Main Event victory.


"When I got here, I just wanted to qualify for the main event," said Bromley. "When I qualified, I just wanted to run a solid heat race. I didn't have the best starting spot in the main but I had faith in my KTM. I could feel the riders around me on the final laps and I knew I had to be perfect. Thankfully I crossed the line first and I'm so happy to get this win."


It wasn't easy for Bromley, as he was forced to surrender his enormous lead on lap nine after Ryan Wells (Five Star Steel & Fabrication/Honda) bit the dust and forced the red flags to fly and call for a staggered start. However, Bromley wasn't fazed as he claimed the holeshot for the second time tonight. For the remaining five laps, Bromley was forced to make quick decisions and critical moves in order to fend off Wyatt Maguire (Kirkland Racing/Yamaha) who tried everything to steal the lead.


Maguire's efforts weren't good enough, as Bromley slammed the throttle just a little bit harder on the final turn to fend him off by a slim margin.