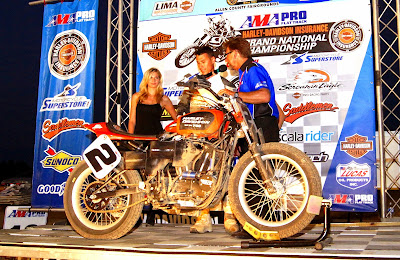 After qualifying in the 17th-place spot out of the 44-rider field, The King of Cool missed qualifying for the main out of his heat race by just over 2.7 seconds, and was forced to race the semi in order to try and make the National main later in the evening.  Coolbeth put a spanking on 'em during semi race #2, and won by just shy of 2.8 seconds to punch his ticket to the main.  As you can see from the shot above while being interviewed by AMA Pro Flat Track announcer Barry Boone that the rider of the #2 Screamin' Eagle/Harley-Davidson Motor Co/Fox/Arai Helmets-sponsored factory XR750 rode so hard to beat runner-up Kayl Kolkman and 3rd-place finisher JD Beach that he almost shook the right-side number plate off of his sturdy mount.

But highs turned to lows quickly for the long-time and popular contender of The Rolling Thunder Show as the 25-lap main roared off, and when entering turn 3 on the first lap, Coolbeth caught an inside track marker and suffered a broken leg in what was an extremely freak incident.  As a result, for the first time in recent memory, the last remaining factory-backed rider in the greatest racing show on wheels in the world was forced to the sidelines for the middle part of the season's schedule, missing four rounds while recuperating.

When Kenny did return to the track at round 10's running of the 2012 Lucas Oil Indy Mile, he came back with a pretty big bang in carding a 5th-place effort on his return, and leaving little doubt that he had lost his edge or touch in the almost nine weeks he was away from the track.

Last Saturday at the Knoxville Half-Mile in the mid-section of the Hawkeye State in Iowa, Coolbeth made another fabulous return in the shape of returning to the podium as he took charge on lap 5 and proceeded to runaway with the win in just his second race back after his summer hiatus, proving once again you can't keep a good man down and if/when you do, he's going to come back fast and leave you in the dust.  And with his great effort along with the H-D factory team really coming together of late, look for more and soon from the Connecticut resident.

A big congrats to Kenny for a super return to the track and to his winning form, it couldn't have happened to a nicer guy and we definitely look to see him up at the front this weekend during the rescheduled doubleheader weekend at the Illinois State Fairgrounds in Springfield!

You can check out all of the offerings below from AMA Pro Flat Track's official press release, along with some extra goodies to help relive the awesome race at Knoxville last weekend.

More on the Knoxville Half-Mile can be found below!


Thanks to AMA Pro Flat Track for this great review video of the Knoxville Half-Mile with winner Kenny Coolbeth, Jr., produced by the great team of Will & Yve from The Fast and Dirty.com:

Dave Hoenig was on-hand at Knoxville pulling double-duty while penning this great article over at Cycle News.........:

.....and also shooting some darn fine shots for the AMA and his always bitchin' site, Flat Trak Fotos.com:

And again we thank the great folks at the Blue Crew at AMA Pro Flat Track for the full results from the Knoxville Half-Mile: