When the green flag finally flew after a two week delay on round 13 of the 2012 AMA Pro Flat Track Harley-Davidson Insurance Grand National Championship presented by Motorcycle-Superstore.com season at the Springfield Mile II, the fans on-hand got one heckuva show from the great stars of The Rolling Thunder Show as a battle royale hit the track and for the second time this season the rocket fast prototype Kawasaki of Bryan Smith was crossing the finish line ahead of the competition and leaving them in the dust.

Smith, who led a race-high 20 laps at the stripe during the 25-lap National main, took until lap 6 to get to the front and keep it there on the #42 Crosley Radio/Howerton Motorsports powered by Eaken Racing Kawasaki/Midwest Performance Hardware/Gut Wear-sponsored mount as he battled to work his way from a sixth-place start off the start of the race.  But once he got there, there was no doubt who had control throughout the day's final as he kept it there and took the second win of the season for the new team.

With 2nd-place going to Sammy Halbert on his #7 The South Ass/South East H-D/Mo Vaughn Transport/LZ Racing-sponsored XR750, the Slammer kept himself in the title hunt with three races remaining in the season on the west coast  In the run to the white flag above, Sammy gives it his all to stay glued to the Howerton Kawi in hopes of trying to pull out and draft by in the final corner.

Willie McCoy, the defending double-winner at Springfield, made the trip again to Springfield to try and add to his two stellar wins on the mile oval, but slipped to 7th on the last lap on his #59 Harley-Davidson of Wausau/Independence H-D/Tucker Rocky/Arai-backed XR, and finished just behind 6th-place finisher Kenny Coolbeth, Jr. on the Harley factory #2 XR750.

Jake Johnson, who led the 'best of the rest' with four laps on the day on the #1 Zanotti Racing/Schaeffer's H-D/Boughner Racing/Arai-backed XR and also fell back on the last lap to finish 5th on the day, and keep within sight and 12 points of overall leader Jared Mees.  Mees kept up his run of solid results this season by rounding out the podium on the #9 Rogers Racing/Blue Springs H-D/Saddlemen/National Cycle-sponsored and Brent Armbruster-tuned XR and ended the day .263 seconds behind winner Smith, and also led the remaining lap at the start/finish line during the National main.  JD Beach brought the #95 USC Kawasaki home in 4th-place for a great run in his weekend off from his road racing duties in the AMA Pro Daytona SportBike Series.  Beach will head to Homestead-Miami Speedway this coming weekend to race in the penultimate round of the 2012 season.

The Smith-Howerton Kawasaki wasn't the only 'Mean Green' machine to run up front throughout the day, and for the first time in memory Kawasakis won all of the heat races, the Dash and one of the semis.  Beach got the fastest heat race win, while Smith and Werner-Springsteen Racing's Brandon Robinson #44 took the others, and BRob44's team mate, Stevie Bonsey again took the #80 mount home to a win in his semi race.  Jeffrey Carver, Jr. on the #23 Kiesow Racing XR was the only non-Japanese import to win a race during the day.  And to paraphrase Yve Assad-Fulford (one of THE great shooters from The Fast and Dirty.com) it really does look like Bill Werner and Jay Springsteen have found a great pair of riders to make a big difference on the team's overall efforts this season.  Great job from those guys without a doubt! 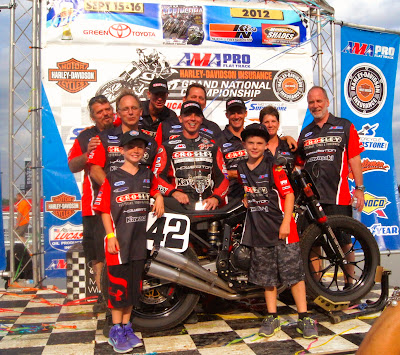 The whole Howerton Motorsports team gets in on the after-celebrations on the podium at the Springfield Mile II on Sunday, September 16, minus Bryan's Dad Barry (who we should note may not seem as involved with the super team effort that Rick and Company bring to the mile events this season, but that doesn't mean his input to the team isn't invaluable.  You never overlook what that man has to say with all of the great efforts and wins he has been a part of over Bryan's career!)

Some of the team and family members on-hand for the big celebration after round 13 of the 2012 AMA Pro Flat Track Harley-Davidson Insurance Grand National Championship presented by Motorcycle-Superstore.com season include team wrench Dink (glasses, left side), Bryan, Jeff Gordon (behind Smith), Rick and his lovely wife, Colleen Dallenbach-Howerton, Donnie, and Rick and Colleem's boys.

Just a note--to those of you that follow or have followed either Indy cars or NASCAR over the years, the name Dallenbach may ring a few bells.  Colleen's father, Wally, Sr. raced for many a team owner back in the '60s and '70s in the Indy 500, but most notably the Andy Granatelli team that also included the late Swede Savage, Mario Andretti and many others high-profile open wheel racers.  Her brother, Wally, Jr. has raced for, among others, Hendrick Motorsports, and now is involved in the broadcast booth with TNT's coverage of the NASCAR races.  Both father and son have taken part in many events at the Pikes Peak Hillclimb as well.

So Rocket Rick not only has 'go fast' in his own blood, but he married into it as well.  Racing runs pretty darn deep in this family, so you know they're going to be hard to beat just about anywhere.  They were impossible to beat yesterday with Bryan twisting every ounce of juice out of the Eaken Racing Kawasaki powerplant at the Illinois State Fairgrounds mile oval.

Ten feet from the checkered flag, the difference between 1st-place finisher Bryan Smith #42 and runner-up Sammy Halbert #7 is about a half a wheel, and the winning margin of victory just .041 seconds as measured at the stripe by the AMA Pro Flat Track transponders and finish line beam.  Sammy stated on the podium that he could get into Flyin' Bryan's draft, but when he fell out of it he would lose his momentum.

You can check out the official press release below thanks to the great Blue Crew at AMA Pro Flat Track, and stay tuned as the week goes on as we will be back with more reviews and highlights of the summer-ending and Midwest-ending events at the Springfield Mile II from yesterday!


SPRINGFIELD, Ill. (September 16, 2012) - Bryan Smith (Crosley Radio/ Kawasaki) notched his second AMA Pro Flat Track win of the season and looked outstanding the whole way during Sunday's AMA Pro Harley-Davidson Insurance Grand National Championship presented by Motorcycle-Superstore.com and Lucas Oil main event at the Illinois State Fairgrounds. Smith got the most out of his Kawasaki today as dominated the straightaways at the legendary Springfield Mile.

"I couldn't have done it without my team, they built one awesome bike, I'm very fortunate to be able to ride for them," Smith said. "I felt going in that I'm the best on mile tracks and I definitely got the best out of my bike today. This was a big win for me."


Smith's resume indicated that he was one of the favorites going in to today's race as he consistently excels at mile-long tracks and today was no exception. The Michigan native claimed the lead on lap 5 and though he had it taken away several times coming out of the turns, he promptly reclaimed it every single time on the back and front stretches. 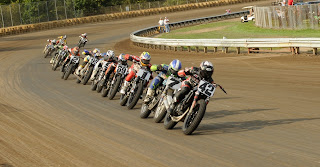 
The major threat to Smith's lead came on lap 24 when he slid a little too wide in turn 2 and surrendered it to Sammy Halbert (Southeast Harley-Davidson). Smith dropped back a couple slots on the mishap but it seemed like it was all part of the plan as he slammed the throttle on the back-stretch and crushed all hope of any rider thinking they had a chance.

Halbert, Jake Johnson and Jared Mees (Rogers Racing/ Harley-Davidson) gave Smith a good run but on this day, on this track, it was inevitable that Smith was deemed the victor.


The AMA Pro Motorcycle-Superstore.com Pro Singles main was an absolute thriller as Cody Johncox (Sunnyside Cycle/ Yamaha) won by a scant .004 seconds over second-place finisher Zakk Palmer (Western Hills/ Honda). The race was literally up for grabs coming down to the final turn as riders were four wide going down the back stretch. Palmer slammed the throttle on the final stretch and came away with a big win.


"I tried the whole race to get down low, and when I did, I finally got some traction and was able to pull out the win," said Johncox. "This is definitely the biggest win of my career and I'm so happy it came here in Springfield. I really have to thank my sponsors and team, they are a huge reason why I'm standing here today."


It was a tight clean race the whole way up until lap 9 when two riders went down, resulting in a staggered restart. Riders were four-wide for the better half of the remaining laps with several lead changes all the way up until the end. With three laps to go, Stephen Vanderkuur (Parkinson Brothers Racing/ Honda) had the lead and looked as if he might take the win and increase his lead in the point standings but it just wasn't in the cards today as he finished in seventh place.


Michael Bickerton (Hogwrench Racing/ Honda) had one of his best races of his career as he found himself on the podium for a third place finish. Cole Anderson (Diesel Minnesota/ Honda) and Jason Isennock (High Dairy Stores/ Honda) finished in fourth and fifth places, respectively, to round out the top five.