Round 13 of the 2012 AMA Pro Flat Track Harley-Davidson Insurance Grand National Championship presented by Motorcycle-Superstore.com season gets off to a roaring start as the front row blasts off for the 25-lap National main at the Illinois State Fairgrounds on September 16.

In the end, Kawasaki for the first-time ever had won all three heat races (Beach, Smith and Robinson), the Dash for Cash event (Smith), one of the semi races (Robinson's team mate Stevie Bonsey #80 on another of the gleaming green mean Kawasaki Werner-Springsteen machines), and the main event when Smith showed the folks on-hand that the Ricky Howerton-helmed team was the real deal in winning their second of four events this season of the five they have planned to run in the mile events on this year's calendar.  The Santa Rosa Mile on September 30 will be their last together for the season, most likely much to the other competitors' liking.

These and another big handful of riders competing in The Rolling Thunder Show will be in on the action during round 16 at the Pomona Half-Mile on Saturday, October 13 to battle it out in the final event of the year as Johnson, Mees and one fast Washington State resident, Sammy Halbert, take their battle for the AMA Grand National Championship down to the wire in what will surely be a must-see event that will give the folks on the Left Coast one heckuva present while wrapping up the 2012 season.

AMA Pro Flat Track and the promoters of the season finale at the Pomona Fairplex in California have announced the a new presenting sponsor for the season's wrap event, and you can check out the full press release below and also get your tickets while they are hot.  Pomona has been one of the best-attended events of the series in what will be it's third season-finale for the best racing show on wheels in the world in the last four years.

Sent on behalf of the Promoters of the AMA Pro Flat Track Finals at Pomona Fairplex:

The Law Tigers group is joining one of the most storied racing events in Southern California as the AMA Pro Flat Track Finals once again returns to Pomona's half-mile oval to crown champions in the AMA Pro Harley-Davidson Insurance Grand National Championship presented by Motorcycle-Superstore.com and Lucas Oil. Both the Harley-Davidson Insurance Grand National Champion and the Motorcycle-Superstore.com Pro Singles Championship will be decided on this incredible night of racing.
Here the motorcycle world's greatest riders will face off shoulder-to-shoulder and bar-to-bar at speeds of up to 130 mph! The greatest brands in motorcycle racing will be represented including Harley Davidson, Ducati, KTM, Kawasaki and more! 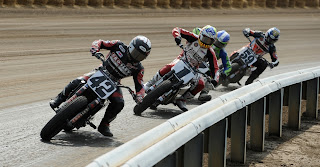 Bryan Smith #42 leads Jake Johnson #1, Jared Mees #9 and Willie McCoy #59 during the Springfield Mile II in round 13 of the 2012 AMA Pro Flat Track Harley-Davidson Insurance Grand National Championship presented by Motorcycle-Superstore.com season on September 16.  Smith, who won the second race of the season at the Illinois State Fairgrounds for his Crosley Radio/Howerton Motorsports powered by Eaken Racing Kawasaki team, will be switching back to his Moroney's FastHog.com/American H-D-sponsored XR750 for the last two rounds of the season in Tucson and the Pomona Half-Miles.  AMA Pro Flat Track photo by Dave Hoenig.

"Law Tigers is proud to be part of the exciting and ever growing sport of Flat Track racing!" said Ari Levenbaum, V.P. of Marketing and Operations for Law Tigers.
Law Tigers is a professional association of motorcycle injury lawyers who help riders every day. Dedicated to rider safety, awareness, and education, the Law Tigers group is committed to the riding community. Law Tigers may be reached at www.LawTigers.com.
This year the action starts early as local motorcycle clubs will be featuring their bikes on display at the pre-race tailgate party complete with live music, motorcycle vendors, and family activities which will run from 3-5 pm. The pre-event pit party will be open at 5:15 pm to fans who purchase advance tickets at www.flattrackfinals.com. The Legends Autograph Session starts at 5:45 pm and racing action gets under way at 7 pm.