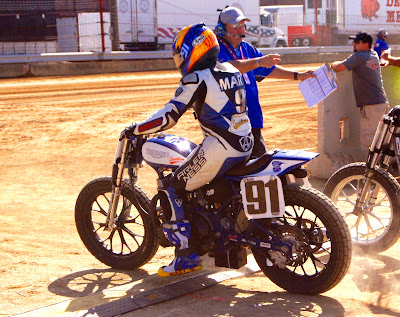 After initially making his first AMA Grand National event at the Sacramento Mile in a Twins Series event, Martin and team have been coming together and proving what a great combination they are on The Rolling Thunder Show circuit.  At the Lucas Oil Indy Mile (pictured above on August 18 rolling out for final qualifying with the help of AMA Pro Flat Track's Kevin Snyder), Martin pulled-off a great win in his semi to make the 18-rider main in front of a packed house with some European fans courtesy of the 5th Annual Red Bull Indy MotoGP going on down the road a few miles at the Indianapolis Motor Speedway.

At Knoxville last weekend, Martin set an impressive 7th-fastest time in qualifying out of the 40 riders on-hand that took a time in the combined sessions at the Sprint Car Capital of the World.  He then backed that super effort up with a great 3rd-place finish in his heat behind 2-Time and defending AMA Grand National Champion Jake Johnson on the #1 Zanotti Racing XR750, and Brandon Robinson on the #44 Werner-Springsteen Kawasaki, and in the process getting his direct ticket to the National main.

The Californian then proceeded to fight the good fight, getting a great start in the 25-lap red flag-delayed event, only to struggle with his restart, but still held on tough for an eventual 11th-place finish and his third straight Twins Series main event finish.

Bravo to Mikey and the hard-working crew of the Bill Gately-helmed Bonneville Performance Triumph team for turning the corner this year and making what is obviously steady progress on their efforts with the factory-backed British parallel twin mounts.  These guys have been really getting closer all season and to see them get some steady results in terms of making mains on a regular basis and winning their first qualifying race together (and first for the team since former rider Shawn Baer #32 won his semi to make the 2010 Lucas Oil Indy Mile) at Indy in August shows that the progress is happening and they are gelling as a team is great to see for these guys.

Congrats to Mikey Martin and the Bonneville Performance Triumph team for another solid effort last weekend and we'll be looking for some more solid results as they swing into the Springfield Mile II rescheduled event set for this Sunday, September 16.

And you can check out Mikey and the team's press release below to help get you ready for the fast and furious action that will be hitting the Illinois State Fairgrounds mile oval in just over 36 hours.


This race report is from the Knoxville Half-Mile in Knoxville, Iowa at the famous Knoxville Raceway.  It was originally scheduled as round 13 but due to the double-header at Springfield getting rained out it became round 11.
The rescheduled date for Springfield will be September 15th for the Short Track and the 16th for the Mile. That is where I will be heading this weekend.

I did well here last year in the Pro Singles and had some confidence going in.   I started the day out good in the practice session by qualifying fifth.  We made a few changes on the bike but not much.  I felt like I did some fast laps in qualifying and ended up seventh overall. 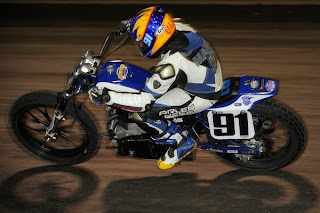 In my heat race I got a great start, I nailed my first hole-shot, I lead the first lap then I got passed by number 1 Jake Johnson.  I hung with him for the majority of the race til I spun just a little coming out of turn two and let a rider get by me.  Had I held the second place, that would have been my first Dash-For-Cash.  I ended up third and that is a direct transfer to the main, it was my best heat race finish this year and my first Half-Mile main event on the Triumph.

In the main event I was on the second row in the third position, I got another great start and I was running sixth for about three or four laps when there was a red flag thrown for a rider that fell. 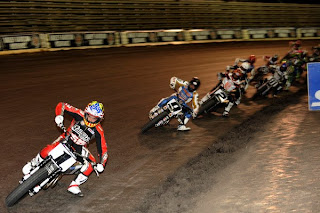 They lined us back up in the staggered restart. I was lined up where no one has rode or started all night so it was slick. I got a horrible start, I was in fourteenth for half the race, a few riders broke and I made a few passes and ended up eleventh. I was very happy about my performance, I was just upset about the restart.

Thanks to our great sponsors: