Laguna Seca returns to the World Superbike calendar in 2013

Rome (Italy), Friday 21 September 2012 – Following a three-year agreement between Infront Motor Sports and Mazda Raceway Laguna Seca, the United States Round of the eni FIM Superbike World Championship will take place at the Californian circuit next season and in 2014 and 2015.
The confirmed date for the 2013 event will be 27-29 September, and it marks the return of the championship to the spectacular Monterey circuit for the first time after an eight-year absence. The last World Superbike round was held at Laguna Seca in 2004.
Paolo Flammini, CEO of Infront Motor Sports, declared: “We are absolutely delighted to be returning to Laguna Seca for the US Round for the first time since 2004. Over the ten-year period in which we were last there, we witnessed an extraordinary growth in interest and in overall attendance and we are sure that this event will once again become one of the most prestigious on the calendar. The return of Laguna Seca to the Superbike World Championship, with its six competing manufacturers, will definitely be a boost to the championship’s growth in the US market as California has a special tradition and offers significant opportunities for the motorcycle industry, sponsors and media.” 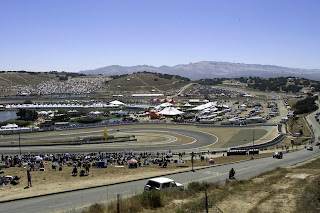 The Laguna Seca circuit in Monterey, California is shown in this shot from the series' last visit during the 2004 season.  Photo courtesy of the eni SBK World Championship.
“We have a strong history with World Superbike and are thrilled to have them commit to a three-year race schedule,” says Gill Campbell, Mazda Raceway Laguna Seca CEO/general manager. “Their return to Mazda Raceway Laguna Seca solidifies our position as THE premier circuit in the U.S. for motorcycle racing.”
About the FIM Superbike World Championship
The FIM Superbike World Championship features a high number of riders, teams and manufacturers (Aprilia, BMW, Ducati, Honda, Kawasaki and Suzuki), racing with high-performance bikes that are similar to those available on the market for normal everyday road use. The championship’s well-tried formula of two races at each round, Pirelli’s one-make tyre supply, as well as stable technical regulations over the years, have helped World Superbike become a truly exciting spectacle for millions of TV spectators and fans around the world.
Media coverage of the FIM Superbike World Championship is firmly established worldwide and is helping to align the strength of the series across the scale. Overall, under Infront’s tenure, live coverage has increased steadily since 2007 and the number of broadcast partners has grown by 40 per cent. In 2011, the series reached a cumulative audience of 460 million viewers with 3,300 broadcast hours worldwide.
For further information:
Julian Thomas
Press Office Associate Manager
Cell. +39 340 0993623
Email: julian.thomas@infrontsports.com
Nino Barra
Press Office & PR Italia
Cell. +39 339 4688138
Email: nino.barra@infrontsports.com
Valentina Conti
Sponsorship & Int’l PR Associate Manager
Cell. +39 388 3032059
Email: valentina.conti@infrontsports.com
In 2011 the FIM Superbike World Championship achieved the following: