SPRINGFIELD, Ill. (September 2, 2012) - It just wasn't in the cards. For the second time this weekend, weather has forced the rescheduling of this weekend's AMA Pro Flat Track races at the Illinois State Fairgrounds, in Springfield, Illinois. Following another heavy overnight storm, both the Springfield Short Track and Springfield Mile track surfaces were left in such condition that they were deemed unsafe to race on. Despite valiant efforts by the IMDA as they continued to work hard on getting the tracks up to par, the force of nature was too great on this Labor Day weekend. 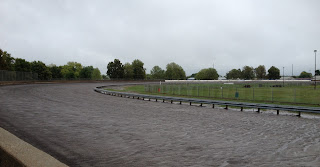 Persistent rains in the area from the leftover remnants of Hurricane Isaac left the Illinois State Fairgrounds mile oval (shown) and Multipurpose Arena all but totally washed out on Sunday morning, September 2.  AMA Pro Flat Track has rescheduled the doubleheader weekend for September 15-16.  Photo courtesy of AMA Pro Flat Track.
All hope for the fans getting another opportunity to catch the AMA Pro Harley-Davidson Insurance Grand National Championship presented by Motorcycle-Superstore.com and Lucas Oil racing action in Springfield isn't lost however, as the two races have been rescheduled for a later date.
The Short Track race will be held on Saturday, September 15, 2012 with opening ceremonies beginning at 7:00 p.m. The Springfield Mile II is now slated to race on the following day, September 16, 2012, with opening ceremonies beginning at 1:00 p.m.
Next up, AMA Pro Flat Track heads to Knoxville, Iowa for the Knoxville Half-Mile on September 8, 2012.
For the latest information, please follow us on Twitter at http://twitter.com/AMAProFlatTrack or like us on Facebook at http://www.facebook.com/AMAProFlatTrackSeries.
AMA Pro Racing is the premier professional motorcycle racing organization in North America, operating a full schedule of events and championships for a variety of motorcycle disciplines.  Learn more about AMA Pro Racing at www.amaproracing.com.