Five-star Sykes eases away in Tissot-Superpole


Misano Adriatico (Italy), June 9, 2012 – Tom Sykes (Kawasaki Racing Team) was a clear winner in Tissot-Superpole at the eni FIM Superbike World Championship round at Misano, his fifth such success in 2012 thus far. His quickest lap time of 1 minute 35.375 seconds was the best of the weekend to date, with Sykes over 0.6 seconds faster than the next best rider, Jonathan Rea (Honda World Superbike Team). Sykes now has a career total of seven Superpole wins, putting him level with famous names in SBK racing like Regis Laconi and Noriyuki Haga.


Tom Sykes: “I enjoy the watches, it’s something to aim for! Today we did a very good job, I can’t deny we’ve had a difficult weekend, it’s the first time all year we’ve had very hot conditions and low grip levels. We started off the weekend very slow, quite embarrassing to be honest. Today was a mixed bag for qualifying, but when the pressure was on my boys delivered and I was able to put a good lap together.” 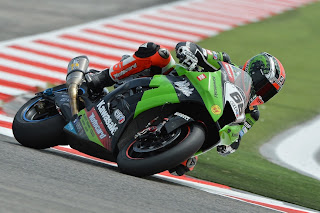 
Jonathan Rea: “I can’t grumble, that lap of Tom’s was incredible! For me, we achieved our first target to be on the front row, the guys are working hard on the bike for tomorrow’s race and I’m quite happy at a track that almost ended my season last year. To come back this year, qualify on the front row and to be quite strong makes me really happy.” 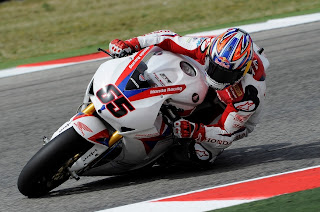 Jonathan Rea qualified 2nd today behind Sykes in the Tissot-Superpole session on the #65 Honda World Superbike Team CBR1000RR, just .283 seconds in arrears.  The top eight riders in the final Superpole 1 session qualified within just under 1.2 seconds of one another.  Photo courtesy of the SBK World Championship.


Ayrton Badovini: “I’m very happy because these are very difficult moments for me and my team. The result is very important because we want to work more to win the race. We have been good in the races, but not very fast in the single lap and so far this season third place in Superpole has been impossible.”

Jonathan Rea, Tom Sykes and Ayrton Badovini show-off their hardware for their days' work during the Tissot-Superpole ceremonies at Misano today.  Photo courtesy of the SBK World Championship.


Sam Lowes (Bogdanka PTR Honda) took the pole in the Supersport World Championship class at Misano thanks to his Friday best time, which could not be bettered by Lowes himself or any of his rivals today, despite their many close attempts. Jules Cluzel (PTR Honda) was second with Kenan Sofuoglu (Kawasaki DeltaFin Lorenzini) third and Broc Parkes (Ten Kate Racing Products Honda) the final rider on the front row for Sunday’s race. Only 0.200 seconds separated the first four riders, with the top ten within 0.653 seconds of each other. Massimo Roccoli (Yakhnich Motorsport) was the top Yamaha rider, in fifth.


Eddi La Marra (Barni Racing Team Ducati) took the pole position start at Misano after a final session that was interrupted by a red flag. He beat the push of Kawasaki MRS rider Jeremy Guarnoni by only 0.067 seconds with the G.M. Racing machine of Michele Magnoni third. He led a three BMW run of machines, with Lorenzo Baroni’s BMW Motorrad Italia GoldBet version next up and Markus Reiterberger’s Team Alpha Racing S1000RR fifth. The second Barni racing Ducati Panigale of Lorenzo Savadori was sixth.


A brilliant last lap of action at Misano saw a two-rider fight for supremacy won by young Dutch master Michael van der Mark (EAB Ten Kate Junior Honda) from local ace Riccardo Russo (Yamaha Team Italia FMI). The margin of victory was only 0.095 seconds after 12 laps in which Russo was looking dominant for some time. In the championship Russo still leads van der Mark but now by only two points, 81 to 79. Christian Gamarino (GO ELEVEN Kawasaki) was third, over seven seconds down, with Luca Vitali (Yamaha Team Italia FMI) fourth.


Lukas Wimmer from Austria posted the fastest lap in the single-make KTM European Junior Cup qualifying session, to earn the right to start from pole for Sunday’s race. Artur Wielebski from Poland was second, Christian Vidal and Javier Orellana from Spain were third and fourth. Jamie Patterson from the UK went fifth.