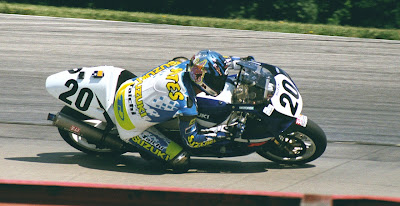 Aaron Yates is shown on the #20 American Suzuki/Yoshimura/Dunlop/Motorex-sponsored Suzuki GSX-R750 during qualifying for the Honda Super Cycle Weekend Presented by Dunlop Tire weekend at Mid-Ohio in July 2000 in preparation for the Wiseco Superbike 100 doubleheader.  Yates would go on to win both races over the weekend in the AMA Superbike Championship Series class.

The 2-Time AMA SuperStock Champion had been out of action since the California Speedway round of the AMA Superbike Championship in early 2010 when he suffered a severe leg break during an early practice session.  Several weeks ago, Yates returned to racing while riding in a WERA Endurance Series event at Road Atlanta for the BEi Racing/Dunlop Development team on their Suzuki GSX-R1000, which he helped the team to win in the process.

It was announced earlier today that Double A-ron would be stepping up his game in his return to two-wheeled racing action by accepting a wild card ride in the August 2012 Red Bull Indianapolis MotoGP round, riding for the BCL Motorsports team in the CRT class at the Indianapolis Motor Speedway.

You can read that story here thanks to RoadRacingWorld.com: