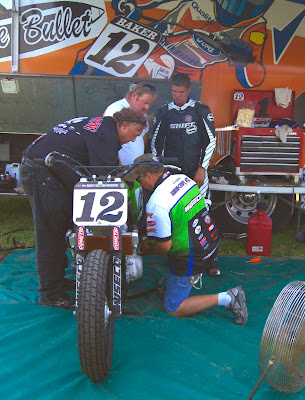 While Kenny Tolbert digs into the #12 Kenny Tolbert Racing Kawasaki/Big Ed Beckley/Wiseco/D&D Exhaust-sponsored Kawasaki 650R-based mount, Big Ed Beckley, Bubba Bentley and rider Brad Baker discuss what happened to keep The Bullet from qualifying for round 4 of the 2012 AMA Pro Flat Track Harley-Davidson Insurance Grand National Championship presented by Motorcycle-Superstore.com season at the Springfield Mile I on May 27.

After finishes of 7th-place in his heat and another 7th-place in semi race one, Baker missed the cut for the 19-rider National main by just over 1.6 seconds after the machine suffered from running issues throughout the day.

KT announced officially on Wednesday June 27 that he would be cutting back effective immediately in order to regroup and hopefully bring in more sponsorship in order to continue racing alongside rider Baker.  In the meantime, Baker will be working on putting together a ride in the Twins Series and will be riding his own Honda CRF450Rs in the upcoming Singles Series events.

As was originally thought and reported by Tolbert and '11 Rookie of the Year Brad Baker on Wednesday, Baker will NOT be riding a TCR-supplied XR750 at the upcoming Lima Half-Mile round that is scheduled for tomorrow, as was reported this morning by Tyler Porter's Fight For Dirt Track.com.  However, I'm sure Baker WILL be able to come up with a good Twins ride for tomorrow's Ohio National Championship race at the Allen County Fairgrounds, but with whom, we will have to wait until tomorrow to find out.

Look for KT and The Bullet to hopefully pull in enough sponsorship dollars in order to race the Indy and Springfield rounds later in the season, at the very least, and with any luck maybe enough sponsors will be able to step-up in order to keep this powerhouse team together for the better part of the 2012 season yet ahead.

Here is the official press release from Kenny and Kenny Tolbert Racing, and I have also linked my original interview with KT below to help fill in all of the blanks.

Decatur, TX (June 28, 2012) -- After a short winter project to build a new race team with new equipment, Kenny Tolbert and Brad Baker have decided to part ways due to lack of funds to race at a competitive level in the AMA Pro Grand National Series.

Tolbert has a long successful history in the GNC series and knows what it takes to be competitive, win races and championship titles.  "We just got started late this year and can't seem to get caught up," said Tolbert.  "Running a professional team takes a lot of time and funding and right now we are short on both."

Tolbert says he will be back, "Development on the bikes will continue while we search for sponsorship funding.  When the time is right I will be back with a stable full of winning Kawasaki's." 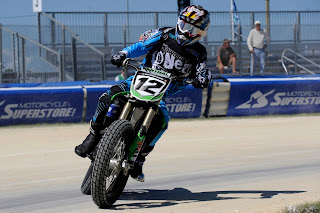 Baker says, "Before the season started Kenny made it clear we needed funding to go racing.  Like so many racing programs around the country we fell victim to not just not enough cash.  I will pick up the pieces to continue racing this season in hopes of coming back to Kenny's program or find another team to join."

Look for Brad Baker, the 2011 Rookie of Year to show up at the Lima Ohio GNC with a new team.  Don't be surprised if Kenny Tolbert doesn't show up at a few GNC events later in the season to test his bikes at the highest level of flat track racing as he prepares for a 2013 assault on the GNC Championship.


Here's the link to the original story and interview with Kenny Tolbert from Wednesday that talks about temporarily mothballing the team in order to better help search for more sponsorship: