Round 4 of the 2012 AMA Pro Flat Track Harley-Davidson Insurance Grand National Championship presented by Motorcycle-Superstore.com season is ready to roll after the drop of the first green flag at the Springfield Mile I round on May 27.  Just seconds after this was taken as the 19-rider field headed into turn one, Nichole Cheza, Brandon Robinson, Sammy Halbert and Rob Pearson were involved in an accident that sent Nichole to the doctor the week after with a lower back injury, Sammy Halbert to the hotel later in the day with multiple bruises and batterings, and Rob Pearson to some serious soreness from his involvement.

Pearson and Robinson made the re-start, only for Pearson to drop-out on his back-up bike after several laps, with Robinson able to continue until almost the half-way point in the 25-lap National main before his engine expired.  All are expected back as of this writing for round 5 of the season at Lima on June 30, with Nichole getting the worst of the injuries in being ordered to strict bedrest for several weeks after, but hoping to return in time for Lima as well.

(L-R above):  Johnny Lewis comes off of the second row on the #10 Scott Powersports/Saddlemen Seats/Wallace Trucking/AXO-sponsored Kawasaki 650R-based twin.  Lewis would go on to lead 8 laps on the day, finishing in the 5th spot after getting some serious seat time in at the front of The Rolling Thunder Show for the day at the Illinois State Fairgrounds.  Sammy Halbert unfortunately only made it into turn one before the aforementioned melee took place, sending him into the airfence on the outside of turn one on his #7 South East Harley/The South Ass/Mo Vaughan Transport/LZ Racing-backed XR750.  Sammy was back in the gym late last week and you know he'll be ready to go to defend his 2011 win at the Lima Half-Mile on June 30.

Before being involved in the turn one incident, Nichole was on her way to having what could have been her very best outing yet at Springfield.  Having qualified 2nd to fast-man Lewis earlier in the day, she was involved in what was the closest heat race finish of the day, behind heat and event-winner Willie McCoy, '11 Springfield Mile I winner and boyfriend Jared Mees, and Robinson, finishing in the 4th spot just .154 seconds behind winner McCoy on her #15 Global Products/Harley-Davidson Co/Black Hill's H-D/Mr. Sign-sponsored H-D XR750.  Here's hoping her injuries are completely healed in time for the June 30 event!

Kenny Coolbeth, Jr. appears to be slow off of the line from the front row by the angle of the shot, but Coolbeth's #2 Screamin' Eagle/Harley-Davidson Motor Co./Fox/Arai Helmets-backed factory XR750 was anything but slow on the day, winning the fastest heat race of the afternoon and still finishing in the 6th spot of the main after colliding with another rider on the last lap of the National.  Coolbeth put in a run at Springfield that all but made him an automatic bid to contend for this year's AMA Grand National Championship after placing 4th in last year's overall standings.  And he did a good job of reminding everyone that you NEVER count out a former 3-Time Grand National Twins Champion.  Ever.

Brandon Robinson made it into the main on the #44 Werner-Springsteen Racing Kawasaki/Action Motorsports/Big Dawg Racing/Metro-sponsored 650R-based twin in what was a grand ride for the former AMA Champion.  Robinson finished just .058 seconds behind winner McCoy in their hotly-contested heat race, showing that he is in fine form for the 2012 season.  This was one of the feel-good stories of the weekend, after Robinson also made the TT the night before.  Since suffering his near-career ending injuries after getting thrown out of the park at the 2009 Lucas Oil Indy Mile, Robinson has endured a litany of surgeries and has slowly but surely shown he still belongs in a National main event.  Look for more good things out of this great young man this year!

Jethro Halbert got his spot in the Springfield Mile I main event by taking the #69 Goodwin Racing/Drew-Massa Trans/SHR/Arai-backed XR750 to a 3rd-place finish in heat race 3 earlier in the day behind Coolbeth and Luke Gough, and just ahead of younger brother Sammy.  He ended the day with a very solid 7th-place finish after the restart and ensuing 25-lap National.  After riding for the Babe DeMay/Memphis Shades team in 2011, Jethro is off to a strong start in the 2012 season and his new program seems to be working better for him for sure.

Mikey Avila was able to qualify for the Springfield Mile I round by taking the 4th-place spot in his heat race on the #33E SDI/Bisha Racing/Alpinestars/Arai-sponsored XR behind the Howerton Products/Eaken Racing Kawasaki rocket of Bryan Smith, defending 2-Time AMA Grand National Champion Jake Johnson and Johnny Lewis.  Avila recovered from his wild, slideways-off-the-line start to bring it home in the 12th-place spot after missing the TT event the evening before.  Once Avila gets more acquainted with his Twins Series ride, look for even more improvement out of the former 2-Time AMA Pro Singles Championship runner-up.

Henry Wiles (coming off of the 3rd row between Jethro and Avila's shoulders) had a mostly up-and-down day for the #12 Lloyd Brothers Motorsports/Foremost Insurance Group/Ramspur Winery/ENI USA-backed Ducati 'L' twin team.  Having to race the semi in order to qualify for the National main event, Wiles did so in style by winning his semi by over 1.3 seconds over Shaun Baer on a Baer Kawasaki and returning-to-the-Nationals Dan Ingram on a TCR H-D XR750.  But something electrical let go in the machine at just over the half-way point and the motor went to running on one cylinder, relagating Hammerin' Hank and the hard-working LBM team to a dismal 14th-place finish for the first Twins Series event of the 2012 season.

Look for Hammerin' Hank to be strong at Lima after nearly getting the Lloyd Brothers team their first National victory there several years ago and running away from the field in 2010 to take the win.  Missing last year's round due to his recovering from surgery, he will be looking forward to getting back to one of his few Twins Series victory tracks.

Steve Bonsey told me at Springfield he's planning on running as many Nationals this year as his budget will allow--all of them, he hopes.  Bonsey took the #80 Dodge Brothers Racing/Alpinestars/Saddlemen/A&A Racing-backed XR750 home to a solid 10th-place finish at Springfield after qualifying via a 3rd-place in his semi behind Jeffrey Carver, Jr. and Rob Pearson.  Bonsey then had a great battle throughout the National with Carver and Ingram to firmly finish just behind Carver and just ahead of Ingram in what was one of the better battles in the field on the day.

Matt Weidman on the #20 Geremy Crow Racing (GCR)/White's H-D/Fiorio Investments/SNIP-sponsored XR750 also had an up-and-down day.  After a 9th-place finish in his heat, Mighty Matt just missed the cut via his semi by .042 seconds after coming home fourth behind Wiles, Baer and Ingram.  He was forced to use a provisional to make the main, and only made it just past the half-way mark before retiring for the day and losing the points lead in the process.  Look for Matt to be 'mighty' tough at Lima, where he finished 3rd in 2010 and 2nd last year.  Cushion tracks are his thing, and he does his thing real good there!

And finally, Clermont, IN. resident Dan Ingram returned to the scene of the place that nearly ended his life and racing career some 19 years prior.  Just barely seen in this shot, Dapper Dan did one heckuva job at Springfield on the #31J TCR/Indy Southside Harley/Zanna Racing/Tucker Rocky-sponsored XR750 coming off of the back row to come home in a strong 11th-place finish on the day.  Dan's planning on running the year with the Tom and Nicky Cummings team and will be at the 'test and tune' day at Lima on June 14 to get the #31J machine dialed in for the June 30 National.

AMA Pro Flat Track and the people from the Ohio National Championship will be opening the Lima track from 1-6 PM EDT this Thursday to host riders, teams and fans for a testing day working up to round 5 of the 2012 season.  With the great crew of Dan Johnsen and Steve Morehead leading the folks out of Daytona Beach to the heartland of Ohio, the day's activities should be more laid back then a National event, but run with the precision of the super group of people that bring us the 2012 AMA Pro Flat Track Harley-Davidson Insurance Grand National Championship presented by Motorcycle-Superstore.com season.

So if you can get to the test day this Thursday June 14 and/or the Lima Half-Mile on June 30, you won't regret it.  You'll see the majority of riders that were on-hand at Springfield mixing it up, and Lima not only historically has one of the best-attended events on the schedule, but also has one of the best racing surfaces in the country with it's limestone/pea gravel mix of cushion racing, which provides for some of the best racing in The Rolling Thunder Show, the greatest form of racing on wheels in the world!  And why would you want to miss that!? 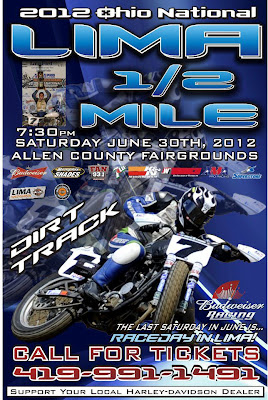 --Here are some important links for the Lima Half-Mile round scheduled for Saturday, June 30--

Event and ticket info for the Lima Half-Mile from the event promoters:

Directions to the Allen County Fairgrounds, direct from their site: