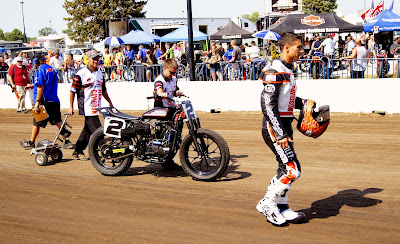 Round 4 of the 2012 AMA Pro Flat Track Harley-Davidson Insurance Grand National Championship presented by Motorcycle-Superstore.com season is about to get underway as rider intros begin at the Springfield Mile I on May 27.  3-Time AMA Grand National Twins Champion Kenny Coolbeth, Jr. and the #2 Screamin' Eagle/Harley-Davidson Motor Co/Fox/Arai Helmets-sponsored factory team work their way out to the starting grid in preparation for the 25-lap National main event to kick off the Twins Series portion of the schedule for the year.

After qualifying 3rd on the day, The King of Cool went on to record the fastest heat race win in heat 3 at the Illinois State Fairgrounds mile oval by over 5.5 seconds (heat 2 and eventual main event winner Willie McCoy) and 6.5 seconds (heat 1 winner and eventual 3rd-place in the main event, Bryan Smith) with a new rocketship under him in his factory H-D XR750 to take the pole for the final.

With former AMA Grand National competitor and winner Mike Hacker (with the #2 machine) in his corner for the 2012 season, the bike appeared to be on rails and handling well after Hacker had spent the last couple of seasons working with the Zanotti Racing squad with 2-Time defending AMA Grand National Champion Jake Johnson.

With a new-and-improved set-up and race face, Coolbeth ran with the lead pack for the better part of the National before almost crashing out after coming together with Johnny Lewis on the #10 Scott Powersports Kawasaki in the final run to the checkers, causing him to slip back into a 6th-place finishing spot, just 1.762 seconds behind winner McCoy.  Coolbeth was forced to take a provisional start the night prior, and charged to a hard-earned 11th-place spot in the Springfield TT.

Keep an eye on this seasoned veteran this year, with a fresh look and a new outlook on racing with RIDE Academy's Hacker on board to help out with suspension set-up this could help to take Coolbeth to a better finish on the season then the 4th-place he fought hard for in the 2011 season.

You can read Kenny Coolbeth, Jr. and the Screamin' Eagle Harley-Davidson Motor Company's press release here on the 3-Time AMA Grand National Twins Champion's day at the Springfield Mile I event on May 27: