AMA Flat Track: Dan Ingram Shows You're Never Too Old to Return to The Springfield Mile 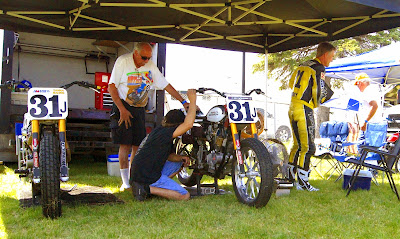 With practice about to begin for the day at round 4 of the 2012 AMA Pro Flat Track Harley-Davidson Insurance Grand National Championship presented by Motorcycle-Superstore.com season at the Springfield Mile, one man's quest to return to the sport that prematurely ended his racing career (and nearly his life) is about to begin again in earnest.  Clermont, Indiana's Dan Ingram, the 1983 AMA Pro Flat Track Rookie of the Year, and former 3-Time AMA Grand National Championship event winner, suits up for his return to the track that left him battered and nearly broken some 19 years earlier, while Tom Cummings and the TCR crew ready the #31J TCR H-D XR750.

In what surely began much earlier then 13 or 14 months ago, Dan got a chance to do some testing at the Circleville, OH. half-mile in spring of 2011 for Rick Howerton and Eaken Racing in what was then a test of Howerton's newly-built first Kawasaki flat track machine.  Throwing a leg over the 650R-based machine, Ingram headed out to check the machine out and within several laps was within a few tenths of a second of the track record and looking mighty racy for a guy who had been out of commission in terms of competitiveness for almost 18 years, and turning some heads in the process.

After ending that test session on a high-note, Ingram told me at Springfield in May 2011 that the original idea was to do some more testing in preparation to actually qualify for the then-scheduled Indy Mile in August 2011.  A couple of things set his original program back a couple of steps, but never derailed it.

As we all know, the August '11 Indy Mile was eventually canceled due to the tragic rigging collapse at the Sugarland concert in early August in which several lives were lost and dozens of people were injured.  And after evaluating his length of time off of an Expert Twins Series machine, the powers that be at AMA Pro Flat Track thought it best that Dan do some racing in the Pro Singles Series and other AMA Racing events in order garner enough points to re-earn his Expert racing license.

So off to tracks like Circleville, Peoria Speedway, Mid-America Speedway in Indy and others Dan and his Dad, Sam, headed, along with a bevy of supporters, fans and long-time friends who were interested in seeing this former National event winner attain his goal of throwing a leg over a big twin and competing with the big dogs again.  Dan Ingram had decided that if he was going to retire from racing, he wanted to do it his way, and not because he had to because of an accident or injuries.

By the time the 2012 season-openers were ready to kick-off the new year at Daytona in March, Dan had already raced in a few of the off-season ice racing series events, and just prior to the Nationals had also gotten a chance to sling a leg over the Cummings XR750 during bike week activities outside Savannah, GA.  And more then several people were instantly impressed with what he did at the track at Oglethorpe after being off of a Twins Series machine for the better part of 19 years.  With his goal of gathering up enough points to satisfy AMA Pro Flat Track's evaluation process complete by the first weekend of May 2012, Dan Ingram was going to be allowed to return to the track as an Expert-ranked rider at the same track that nearly ended it all at the ripe young age of 28, some 19 years previous. 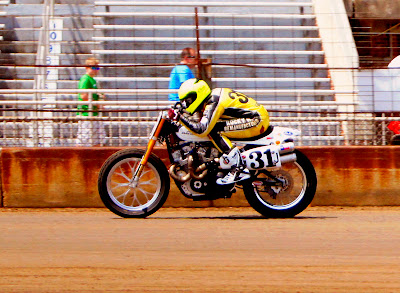 Dan heads out on the #31J TCR/Southside Harley-Davidson/Zanna Racing/Tucker Rocky-sponsored H-D XR750, and in combined practice after only eight laps on the Tom and Nicky Cummings-tuned machine, Dan had put himself in the 26th spot out of the 49 riders entered and 48 that had taken a practice lap.  With a best speed recorded of 97.326 MPH and a time of 36.989 seconds, he had some work to do to get near fast-man Kenny Coolbeth, Jr's speed of 101.491 MPH and a time of 35.471 seconds.  But he was solid and looking good.

In qualifying, things were starting to click.  First session wasn't as strong as what they would have liked in the 30th spot, but in the second session Dan was a solid 17th overall with a speed of 99.456 MPH and a time of 36.197 seconds on the Illinois State Fairgrounds mile oval, putting him just .783 seconds behind overall fast-man Johnny Lewis, and the speed gap dropped to just over 2.2 MPH off Lewis' Scott Powersports rocket-fast top speed that showed the TCR team had been doing their work to get the XR dialed in for Dan.  This would put him on the outside of the front row in heat two.

After losing the top five draft in the heat, Ingram missed the cut by just over 4.4 seconds and was headed to the semi with a 6th-place finish (heats qualify top-4 to the main while the semi races qualify the top-3.)

In the heavily-stacked first semi, Dan Ingram most assuredly returned to racing in the top form of two wheeled racing in the world.  Racing against young guns and current hot shoes in The Rolling Thunder Show including Brad Baker, Mick Kirkness, Daytona winner Matt Weidman and eventual semi-winner Henry Wiles, Ingram raced like a man possessed against Shawn Baer and Weidman and took 3rd-place by just .042 seconds to beat out Matt and qualify for his first AMA Grand National Championship main in 19 years in what was one of the best races of the day in terms of close racing and in terms of crowd and fan support.  With the fans standing on their feet and yelling him on, Dan had truly returned on his terms and put on a great show in doing so.  And the crowd went crazy (as did THIS long-time fan of this now and again great racer and person!) 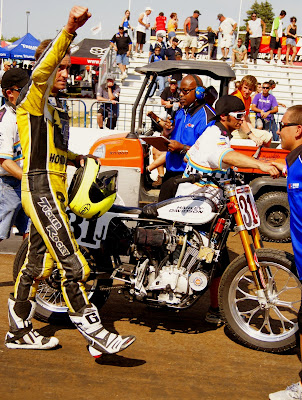 With rider intros taking place at round 4 of the 2012 AMA Pro Flat Track Harley-Davidson Insurance Grand National Championship presented by Motorcycle-Superstore.com season, Nick Cummings and Dan Ingram acknowledge the crowd and the AMA Pro Flat Track officials and greeters as they get ready to take their place amongst history at the Springfield Mile I event on May 27.  19 years after coming full-circle in his return to good-health and eventually the track, Ingram was going to do what few people can do in any sport, let alone one that requires the participants to slide in the dirt, bang bars and draft in multiple-bike packs of over 130 MPH, at the ripe young age of 47 years old.  And the crowd was still going crazy.

After a slip-up during the earlier part of the 25-lap National main event, Ingram settled into a battle with two of the current hot shoes in the series.  Here he leads on the #31J TCR XR750 over fellow-XR mounted rider '10 AMA Pro Singles Champ Jeffrey Carver, Jr. on the #23 Kiesow Racing/Hall's Cycles/Eddie Adkins/Sponseller-backed mount and '09 AMA Flat Track Rookie of the Year Stevie Bonsey on the #80 Dodge Brothers/Alpinestars/Saddlemen/A&A Racing-sponsored H-D XR750.

Looking racy throughout the day, in the end Ingram brought the #31J TCR machine home in the 11th spot out of a National main of riders of which most were almost half his age, and finishing just .092 seconds behind 9th-place finisher Carver and .085 seconds behind 10th-place finisher Bonsey.  And he had shown himself and a packed house at the Illinois State Fairgrounds mile oval that he had not only returned, but he had triumphed along the way and put on one heckuva show for the house in the process.

And as the crowd died down and wiped their tears of joy from seeing Willie McCoy win his second-in-a-row Springfield Mile, some of them did the same for the Man from Clermont who pulled off what very few in any sport can accomplish after so long away.  And he had done it in style, with grace and with finesse, something that had never escaped him in that long 19 year span away from the big track.

Great job Dan and congrats man, you deserve it.  And welcome back to the greatest sport on wheels in the world, it's great to see you out mixing it up again!


You can read more about Dan Ingram's return to racing at round 4 of the 2012 AMA Pro Flat Track Harley-Davidson Insurance Grand National Championship presented by Motorcycle-Superstore.com season at the Springfield Mile I on May 27 right here, thanks to my good friend and traveling buddy, Larry Lawrence, who covered the race for Cycle News.

Here's LL's spin on a return to racing for Clermont, IN. resident Dan Ingram, who showed Indy and every flat track fan proud last weekend by returning to the same track that prematurely ended his racing career and nearly ended his life back in 1993:

With the opening salvo having been fired in his return to Expert-ranked racing in AMA Pro Flat Track Grand National Championship competition, Dan and the TCR team are now hoping to continue running the 2012 season, but like with all teams in any racing sport, are in need of sponsorship.

Danny and TCR are actively seeking sponsors to come onboard to help out their efforts to continue racing in The Rolling Thunder Show, and they have a few ideas laid out as to how to go about it.  With tiered levels of support available, the team is accepting any and all offers of sponsorship in order to be able to continue racing the TCR H-D XR750 in National events.

You can get with Dan on his Facebook page below to see what they have to offer, and to keep up with one of the greats in the sport along the way.  Check it out: