PICKERINGTON, Ohio -- June 6, 2012 -- On July 20-22, the American Motorcyclist Association and the AMA Motorcycle Hall of Fame will welcome a wonderful assortment of expertly restored and original condition motorcycles from numerous eras, styles and countries of origin at AMA Vintage Motorcycle Days at Mid-Ohio Sports Car Course in Lexington, Ohio.

"The fundamental elements of a motorcycle are simple -- two wheels and an engine to move them -- however, since the invention of the motorcycle, we have seen countless renditions of this basic form," said AMA Director of Operations Jack Penton. "AMA Vintage Motorcycle Days offers the country's most distinctive display of these machines, on the track, on the road and as part of the bike shows that anchor our appreciation of two-wheeled art."


First, owners will have the opportunity to show off their running vintage motorcycles as part of the Ride 'Em, Don't Hide 'Em Bike Show. The show begins with a lap of the Mid-Ohio Sports Car Course, then leaves the grounds for a 25-mile scenic ride, returning for a judged show at 2 p.m. Classes include American, British, European, Japanese and Specials/Customs, as well as special show awards. Registration will be on site at the AMA Motorcycle Hall of Fame tent starting at 8 a.m. on Friday.

On Saturday, the Hall of Fame Static Bike Show will feature pristine restored or original-condition vintage motorcycles outside the AMA Motorcycle Hall of Fame tent. Registration opens at 8 a.m., with judging starting at 1 p.m. and awards at 3:30 p.m. The Motorcycle Hall of Fame Static Show features motorcycles from the early 1900s through 1989. Bikes featured will include American, British, European and Japanese models that span various decades. The machines will be set on the show grid and be on public display throughout the day. 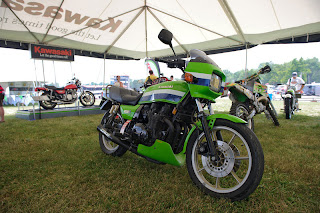 The Kawasaki display at the 2011 AMA Vintage Motorcycle Days event had what appears to be a 1982 Kawasaki ELR 1000 on-hand for viewing.  This motorcycle was the street replica that was commissioned by Kawasaki to help celebrate the AMA Superbike Championship double that eventual 4-Time World 500cc Grand Prix Champion Eddie Lawson took to the '81-'82 AMA Superbike Championship.  Photo courtesy of the American Motorcyclist Association.


In addition, two shows will celebrate "Rockers and Mods," the two-wheeled subculture that is experiencing a classic resurgence in America and is a focus of this year's AMA Vintage Motorcycle Days. A Friday bike show will include the Italian metal-bodied scooters, while British café-racer motorcycles will take center stage on Saturday.

"AMA Vintage Motorcycle Days is all things motorcycling, from the people, the motorcycles and the racing that defines our motorcycling culture," Penton said. "The bike shows are a key element of that mix, and we expect to offer some amazing examples of motorcycle technology this year."

Tickets to AMA Vintage Motorcycle Days can be purchased online at MidOhio.com.

Since 1924, the AMA has protected the future of motorcycling and promoted the motorcycle lifestyle. AMA members come from all walks of life, and they navigate many different routes on their journey to the same destination: freedom on two wheels. As the world's largest motorcycling rights organization, the AMA advocates for motorcyclists' interests in the halls of local, state and federal government, the committees of international governing organizations, and the court of public opinion. Through member clubs, promoters and partners, the AMA sanctions more motorsports competition and motorcycle recreational events than any other organization in the world. AMA members receive money-saving discounts from dozens of well-known suppliers of motorcycle services, gear and apparel, bike rental, transport, hotel stays and more. Through the AMA Motorcycle Hall of Fame, the AMA honors the heroes and the heritage of motorcycling for future generations.