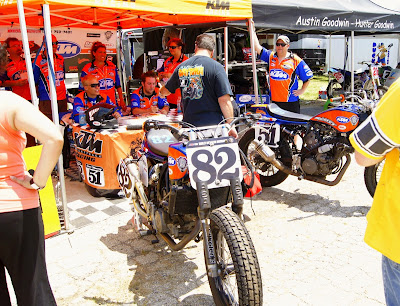 Round 4 of the 2012 AMA Pro Flat Track Harley-Davidson Insurance Grand National Championship presented by Motorcycle-Superstore.com season saw the Waters Auto Body KTM team socializing in their pit area during the break in the on-track action at the Springfield Mile I event on May 27.  The New York State based team had an impressive set-up for the fan walk part of the program, with two of the team's bikes on display along with their riders, and the rest of the team on-hand to talk to the fans and show-off their impressive fleet of KTM LC8-based Twins Series mounts, which the team has obviously benefitted from with the factory backing of KTM North America.

In the shot above, back row you can see team patriarch Dave Waters, Jack and Michelle Higgins, and Rhonda Waters.  Sitting at the table talking with the fans are riders Jeremy Higgins #82 and new-to-the-team for the 2012 season, Steve Murray #51.  One of the team's techs (who I apologize for not having his name) looks over the surroundings on the right side of the team's awning.  The team had a steady flow of fans checking out their line-up during the fan walk and throughout the day overall.

Out front sit the teams massive-looking KTM LC8s, Jeremy's #82 and Steve Murray's #51, both of which are sponsored by KTM North America/Waters Auto Body Racing/Bell Helmets/Arlen Ness and Silkolene Oils.  Both machines have been re-worked since the 2010 and 2011 seasons, most noticeably with newly re-routed exhausts and new paint schemes, among other subtle changes since last season.

The team is getting much closer with the addition of KTM North America this year of making more of the Twins Series National main events, which was evidenced in both riders' top-37 showings in practice and qualifying at the Illinois State Fairgrounds mile oval.  With a tough field of competition, neither Higgins or Murray made the main in the first Twins Series event of the year, but showed great improvement throughout the day's events to help propel them further along in the year of making the show on a regular basis.  In all fairness to both, Higgins had suffered from a fractured wrist in the previous night's TT event at the Multipurpose Arena, and it was Murray's first full-day of competition on the new-to-him LC8 after having ridden XR750s for the last couple of seasons.  With Higgins in his third year with the team, and Murray's veteran leadership, 2012 could be the year that we see the KTM team in a National main more often. 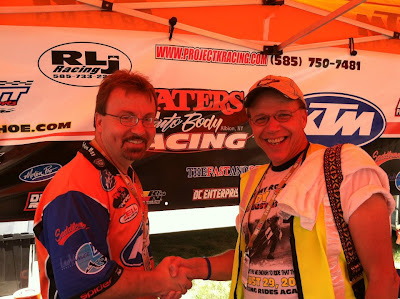 I got a few minutes to talk with the enthusiastic team at Springfield on May 27, and in this shameless self-plug shot of me shaking hands with the head man in charge at the Waters Auto Body KTM North America team, Dave Waters.  It was really a pleasure to talk with them for the few short minutes we had, but they are a great bunch of hard-working folks to be around, and have obviously done a super job of putting a great looking team together in the process of having a good time doing it.

The team is looking forward to the rest of the 2012 season, and they are sure to improve this year as the season goes on, and with the factory backing of KTM North America things are really looking up for the new year.  Waters Auto Body KTM team photo provided by Rhonda Waters.

A big thanks to the Waters Auto Body KTM team for taking time out of their very busy day at Springfield to talk with Stu's Shots, and we're looking forward to seeing more out of this great group of folks in the 2012 AMA Pro Flat Track Harley-Davidson Insurance Grand National Championship presented by Motorcycle-Superstore.com season.  Thanks guys and as always, good luck this year!

AMA Pro Flat Track had their rider spotlight on the Waters Auto Body KTM team's rider, Jeremy Higgins #82 this week.  You can check out their piece on Jeremy here:

And you can keep up with the Waters Auto Body KTM team here via their official site: