Round 3 of the 2012 AMA Pro Flat Track Harley-Davisdson Insurance Grand National Championship presented by Motorcycle-Superstore.com season is about to get ready to roll as the 19-rider main event lines up to do battle in what could be the last of the TT events held at the Illinois State Fairgrounds Multipurpose Arena.  With Kenny Sargent and the MavTV cameras talking to 2-Time defending AMA Grand National Champion Jake Johnson (and defending Springfield TT winner), the rest of the front row makes their final adjustments before the drop of the green flag.

In what was his best start of his young career, Jake Mataya lines up on the outside pole on the #29 Donahue Sports Center/Highpoint Sales/Go Moto/Mid-America Auctions-sponsored Kawasaki KX450F.  Mataya also qualified for the Dash event for the first time in his career, finishing in the 6th spot.  He would end the evening in 12th-place after the 25-lap National main.

Brad Baker on the #12 Big Ed Beckley/Kenny Tolbert Racing-sponsored Kawasaki KX450F gets ready to go (with tuner and team owner Tolbert walking off the line just behind The Bullet) before taking the #12 machine to a solid 6th-place finish in the main.

Eventual 8th-place finisher Steve Bonsey appears to be mulling the moment before taking sail on the #80 Alpinestars/MDR/Pacific Tub & Tile/Confused Clothing-backed Honda.  Bonsey also finished 2nd in his heat behind winner Johnson to qualify for the Dash where he would come home in the 5th spot.

Jammin' Jared Mees gets the #9 Montgomeryville Cycle/National Cycle-sponsored Honda ready for the launch after winning heat 2 on the evening.  His battle for the 2nd and 3rd place in the National with Johnson was one of the hottest contests over the course of the just-over 10 minute final event, with Johnson getting the nod.

In what would be another record-setting evening for the 2-Time AMA Grand National Singles Series Champion, Henry Wiles makes his own final adjustments before running away from the field on the #17 Don's Kawasaki/DPC Racing/Nick Nazzisi/Schiller's Tree Service-sponsored Kawasaki KX450F.  Wiles would take the win by 3.693 seconds over runner-up Johnson, although at times it actually seemed like he had established even more of a gap on the rest of the field's battle.  Hammerin' Hank's night was all but perfect in winning his heat and the Dash for Cash event, and would mark the fourth win in five events for Wiles at the Springfield TT after missing last year's event due to recovering from knee injuries and surgery.  Between the two events at Springfield and the Peoria TT, he has now won 16 of his 21 National main event wins in the State of Illinois.

And finally, Jersey Jake talks with Kenny Sargent as the MavTV cameras film the evening's events just prior to showing everyone on-hand that he hasn't forgotten to ride a motorcycle.  After a slow start to the season at Daytona, Johnson came back in full-attack mode at Springfield and showed everyone in the house you never count out the guy with the #1 plate on the front of their motorcycle and on the back of their jerseys or leathers.

Johnson was the next-best on the night behind winner Wiles, taking the #1 Zanotti Racing/Schaeffer's H-D-backed Honda CRF450R to the runner-up spot after what was probably the best battle of the evening with Mees in the 25-lap National main.  Remember this man in another 10 races towards the end of the season as he will undoubtedly be looking to add to his '10-'11 AMA Grand National Championships and will most assuredly be right in the thick of things, and just as cool and calm as ever. 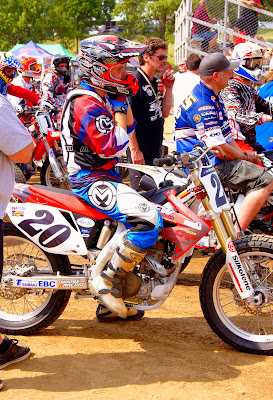 Daytona round 2 first-time winner Matt Weidman straps up just prior to the first practice session in the Expert Singles Series class at the Springfield TT on Saturday, May 26.  Weidman would take the #20 DFW Honda/SNIP/Fiorio Investments/Shoei-sponsored Honda CRF450R home to a strong 7th-place finish in the National main at Springfield after getting a spot in the 25-lap final via a 4th-place finish in his heat behind Wiles, Johnson and Mees.  By the end of the evening, he was still clinging to his overall point standings lead, tied with Mees at 60 points apiece.

The battle for the place and show spots in the 25-lap National main at the Springfield TT was a hotly contested battle between last season's title rivals Jake Johnson and Jared Mees.  Johnson would come out on top in the race-long duel on the #1 Zanotti Racing/Schaeffer's H-D/Boughner Racing/Arai-sponsored Honda CRF450R by just .625 seconds over Mees on the #9 Montgomeryville Cycle/National Cycle/Lucas Oil/Rogers Racing-backed Honda.  Both won their respective heats to qualify for the Dash event, finishing in the same 2-3 spots behind Wiles, just as they did in the final. 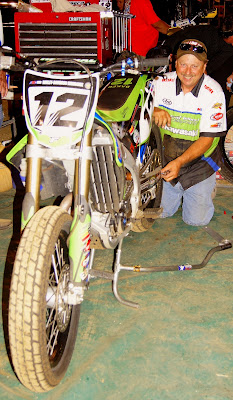 Tuner to the stars Kenny Tolbert works on getting the #12 Big Ed Beckley/Kenny Tolbert Racing/Wiseco/Kawasaki-sponsored KX450F ready for '11 AMA Flat Track Rookie of the Year Brad Baker just prior to the start of the National main at the Illinois State Fairgrounds.  Baker took the #12 machine home to a solid 6th-place finish in the main after finishing 4th earlier in the evening in the Dash for Cash event, which he was able to qualify for after a very strong 2nd-place finish in his heat behind Henry Wiles.

Tolbert appeared to be excited with his new role of team owner, builder and tuner to one of the up-and-coming stars in rider Baker, and is thrilled to be working on the Kawasakis these days after being associated with the Harley-Davidson XR750s for so long in the Twins Series class and the Hondas in the Singles Series class in The Rolling Thunder Show.

The battle for fourth place in the National main at the Springfield TT was a closely contested battle between the top finishing Yamahas, including eventual 4th-place finisher Sammy Halbert on his #7 The South Ass/Fredericktown Yamaha/GYTR/Van's Yamaha-sponsored YZ450F and '10 AMA Pro Singles Champ Jeffrey Carver, Jr. on the #23 Carver's BBQ/Twigg Cycles/WKR/Kiesow Racing-backed YZ450F.  Slammin' Sammy and fast-qualifier Carver were never much further apart during the 25-lap National main then this slight gap.  Halbert would best Carver by just .294 seconds .﻿

Kawasaki takes a look at the record-breaking fourth Springfield TT win by Henry Wiles in this pictorial of round 3 of the 2012 AMA Pro Flat Track Harley-Davidson Insurance Grand National Championship presented by Motorcycle-Superstore.com season:

And as always, a big thanks to my friend Larry Lawrence for his write-up on the Springfield TT in Cycle News: