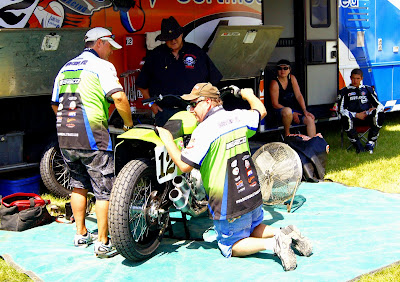 Round 4 of the 2012 AMA Pro Flat Track Harley-Davidson Insurance Grand National Championship presented by Motorcycle-Superstore.com season found the Kenny Tolbert Racing Kawasaki team working feverishly in their pit area between practice sessions at the Springfield Mile I on May 26, after the 650R-based Twins Series machine developed a miss during the first session of the day right off of the truck.

While KT tries to get things figured out on the #12 Kenny Tolbert Racing Kawasaki/Big Ed Beckley/Wiseco/D&D Exhaust-sponsored mount, rider Brad Baker looks on in hopes that things will get worked out in time for the second session.  As we know by now, things didn't get worked out completely even by the end of the day, and The Bullet failed to qualify the new mount for the first Twins Series event of the season.

And in what may have been an early indication of worse things to come, news comes today that Tolbert and Baker have parted company 'for the time being' and KT will be putting the machines aside for the foreseeable future to 'work his regular job' and hopefully be able to drum up more sponsorship dollars for down the road.

Just getting off the phone with the multi-time championship winning tuner, Tolbert told Stu's Shots this afternoon that it just came down to dollars and sense.

"It just came down to cubic dollars, I wasn't able to continue at this pace without any more sponsorship coming in, and I told Brad the best thing you can do is go find yourself a good ride now while you can, and maybe we can still put something together for Indy and Springfield, or maybe all the miles, should things come together," stated Tolbert.  "We were really behind on these things this year, and I still believe that one way or another, we'll be back, or I'll be back, should it be.  I just can't continue to fund this thing on my own dime.  We had some people come on board, Big Ed Beckley and Sammy Sweet, who helped us out tremendously, but not to the tune of the type of money it takes to run a full season in this thing.

"And we've gotten by cheap, compared to the Harley's.  Heck, it costs $850 per kit to put bearings in an XR--that's just the rollers and cages--and they break even on it, it costs them so much to produce.  It's an antique design that just keeps going.  I've got less then that in one or more of my motors (Tolbert told Stu's Shots at Springfield he was able to get one motor off of eBay for $200, but typically they were $800-1000 +/-.)

"I just ran my numbers last night," continued the 26-year AMA Grand National Championship veteran, " and we had about $12K in the first Kawasaki we put together, maybe $14.5K total.  You can build these cheap (compared to the long-standing Harley-Davidson XR750) but you still have to have the funds to contest the series.  Shoot, the whole season only pays around $70K if you win all the races (not including any points fund cash) and you're not going to win all the races.  Bottom line it was about cubic dollars, and I have to look out for me and my family and couldn't continue to fund it out of my pocket."

The man who is best known for his association with 7-Time AMA Grand National Champion, Chris Carr, has been around this sport for close to four decades.  "I love this sport and I love the racing, it's been my life and my love, and I want to continue to keep racing, but right now, it's just too much.

"We were a little behind on both of these bikes.  With the 650 (which was being run in a 700cc platform) we got started just five weeks before Springfield, and it proved to be too much without the extra funds coming in, that never materialized.  We had close to $1500 in just the fuel tank, which was a crafty little piece, and re-worked it and got it just right.  I suppose with extras, you feasibly could have a rolling (chassis) together and ready to go for about $14.5-$15K, depending.  You can't do that with a Harley.  And I love Harley's, they've been my life, but they just got too damned expensive, and these Kawis I still believe are the future of the sport," along with the folks that are running the Ducatis, Triumphs, and so forth, Tolbert stated.

Right now, it looks like Kenny Tolbert will be temporarily mothballing the team "as I've got grass to cut here at home now.  I told Brad you need to get out and get a ride and maybe by Indy we can run there.  Brad's a great kid, one heckuva rider, and he's going to do well no matter what.  It looks like for Lima he'll be riding one of TCR's XR750s with Nichole Cheza's brother, Mark, turning the wrenches for him." 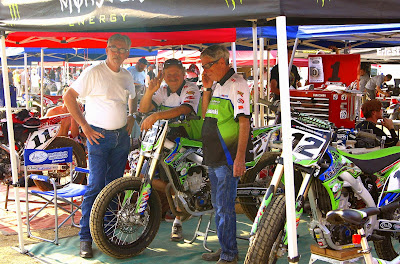 Kenny Tolbert gives his signature peace sign and familiar smile while chatting in the pits during the break at the Springfield TT on May 26 at round 3 of the 2012 AMA Pro Flat Track Harley-Davidson Insurance Grand National Championship presented by Motorcycle-Superstore.com season.

Another thing KT likes about the Kawis, is that they are easy to build.  "Yes, these things are a dream to work on, and you don't have to rebuild them after each race.  It's just the initial investment of putting them together, and of course, the cost to run the full series.  I spent close to $20K last year on diesel fuel alone just for my truck, and Chris had his family and motor home and I'm sure he spent at least $12-15K for fuel for it.

"Nobody has it easy now, with the economy still being what it is, and sponsors are still reluctant to come in with the big money for the support.  Look at the road racing guys, the big teams have 8-10 guys, a couple of bikes per rider, travel expenses and such, you don't even have the factories swarming back there yet since the economy took a dive.  And flat track is still struggling, but we still have some of the best racing there is.  I love this sport, and I want to continue with it cause it's been my whole life, but not without some help.

"Last winter I looked at running the H-D factory team, but they weren't ready and still wanted to keep it in-house through the 2012 season.  We'll see.  I still think the Kawis (and some of the other brands trying to make a name for themselves in AMA Pro Flat Track) are the future of the sport, " Kenny went on to say, " and I want to be a part of that, too.

"Even the KX450F Singles Series machine, we just got those two weeks before Daytona and got down there and got lucky and (Brad and I) got some good results.  But we were behind on those, too, and in the end it just caught up to us.  This isn't a cheap sport to contest, and I just decided I wasn't going to do it half-assed, so I pulled the plug after thinking about it after the Peoria (All-Star) races last weekend.  I'm not a quitter, but I have to look out after myself and my family and more money was going out then what was coming in.

"We'll re-group and see where things go.  Brad has a ride for Lima on a strong XR-based team with TCR and Mark Cheza (who is a heckuva tuner) so he'll be all right, and he'll still have more time to put something together for the rest of the season.  He's a great racer and great young man, we had no problems whatsoever working together, it's been a pleasure, but I was looking at having to cut too many corners, and that's not the way to go in this thing, " stated the Texas resident.

So there you have it.  Another great team and pairing in the great sport of AMA Pro Flat Track Grand National Championship racing, and for now Kenny Tolbert is pulling the plug.  "I just can't continue to race on my dime, " the nine-year former Harley-Davidson factory mechanic stated in closing.