"What a fun track, it's nice to be close to home," said Hayes, who hails from nearby Gulfport, Miss. "I saw a lot of friends come out, say hello and check it out, just for our test even, so I think that bodes well; hopefully we're going to have a huge event. I think the track will be very spectator friendly, being as flat as it is. A lot of people can park their campers, get on top and see a lot of racetrack. If M1 brings out the jumbotrons like they're talking about, I think it'll be a great fan experience."

Hayes was the only AMA Pro National Guard SuperBike competitor to break the 1:40 barrier on day one, a milestone he reached in the final session of the day. Yamaha's leading man improved on his effort during day two, posting the fastest time turned on two wheels at the facility in the opening session and then backing that up with a string of sub-1:40 lap times in each of the day's remaining sessions.

"I really like the race track; I think it's a challenging and fun track," Hayes continued. "It's got some really scary stuff coming off the back straightaway through the fast esses there. I have a feeling that track conditions when we come back could be considerably better; they have a race this weekend with WERA, they've got some car stuff lined up, and as more rubber gets onto the track I think it's going to be easier on equipment. Also, in October, the temperature I think should be a little bit better. This was a lot like being at Barber, where the heat makes things really difficult for the bikes. So when we come back I think we'll be able to improve our lap times considerably." 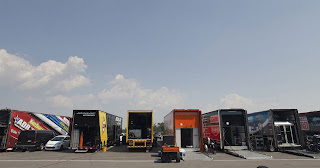 Blake Young (Yoshimura Racing) and Roger Hayden (National Guard Jordan Suzuki) were the only other two National Guard SuperBike competitors to post lap times below the 1:40 mark, turning in times of 1:39.677 and 1:39.727, respectively. Jordan Suzuki's Ben Bostrom posted the fourth fastest time of 1:40.131 and Josh Herrin (Monster Energy Graves Yamaha) rounded out the top five with a time of 1:40.197.


In AMA Pro GoPro Daytona SportBike, the Y.E.S./Graves Yamaha team proved to be the class of the field. Cameron Beaubier piloted his No. 8 Yamaha YZF-R6 to the top of the charts with a time of 1:42.442, turned in the second session of day two, while teammate Tommy Hayden opened up day two with his fast time of 1:42.741 to lock in second fastest at the test event.


The RoadRace Factory/Red Bull crew also proved to be competitive in the AMA Pro Motorcycle-Superstore.com SuperSport division, as team riders Hayden Gillim and Tomas Puerta came in second and third fastest with times of 1:45.668 and 1:45.932, respectively. Gillim came out swinging, turning a flier in the very first session that held until the very last, when defending Motorcycle-Superstore.com SuperSport class champion James Rispoli (Celtic Racing/Orient Express Racing Suzuki) turned in a flier of his own to lead the field with a 1:45.438.


AMA Pro Road Racing will return to NOLA Motorsports Park to close out the season with the Triumph Big Kahuna New Orleans presented by Dunlop Tire and LeoVince on the weekend of October 5 - 7, 2012. For tickets and information, please visit M1 PowerSports online at http://www.m1powersports.com.


The next round of the 2012 AMA Pro Road Racing season will be the Buckeye SuperBike Weekend presented by Dunlop Tire at Mid-Ohio Sports Car Course, in Lexington, Ohio on July 13 - 15. For tickets and information, please visit http://www.midohio.com/.