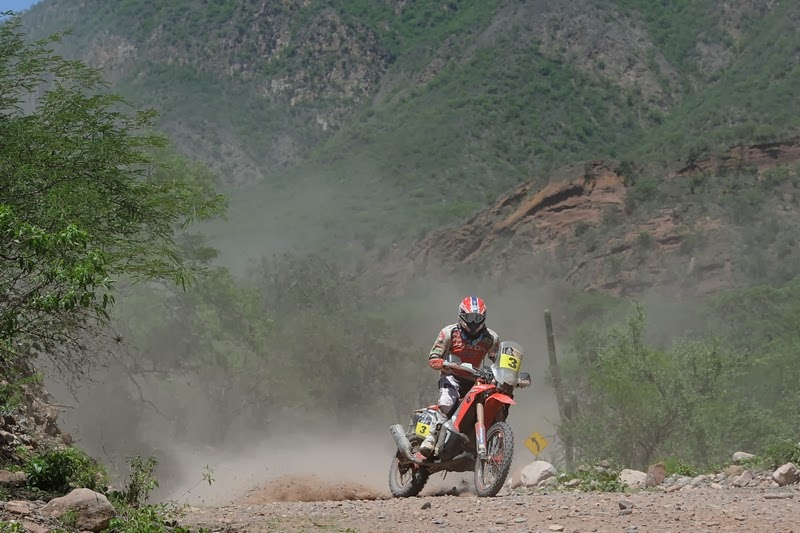 TEAM HRC makes it to the break with Joan Barreda in second place.

It was a fourth place finish for Joan Barreda, and sixth for Hélder Rodrigues in this, the sixth stage of the Dakar 2014, which finished today in the city of Salta, Argentina. Both riders will be poised to attack from good positions when the the second part of the rally recommences.

It will be a well-deserved day of rest for the riders at the camp in Salta after six days of some of the most gruelling Dakar to date. It was, once again, a mountain stage full of hard ground, rocks, a lot of dust, some fesh-fesh and a fair share of animals.

Joan Barreda finished in fourth place in the transition stage of today, taking no chances in the limited visibility and clouds of dust produced by the competitors up ahead. In doing so, the Spanish rider consolidates his position, and will be looking to push hard when the second week of the Rally Dakar gets underway.

Helder too, stated how difficult it had been to gain any precious seconds on his rivals. It had been a blessing to the other riders to have started out in front. Rodrigues finished in sixth and moves up into eighth overall position. Argentino Javier Pizzolito crossed the line in 29th place.

It was a pass with honours for the riders from Honda Argentina Rally Team, Laia Sanz and ‘Cacha’ Rodríguez who continue in the race. Laia Sanz, who picked up a one-hour penalty for missing a waypoint, today made up for the places dropped in the overall standings and is now back in 20th place. Pablo Rodríguez, not wanting to take any chances after a fall yesterday, took it calmly and finished in 43rd.

TEAM HRC would like to make a special mention for Belgian rider Eric Palante, who passed away during the course of the fifth stage. Palante, a veteran and great aficionado of the Cross-Country Rallies was taking part in this his 11th Dakar on a Honda. Our most sincere condolences go out to family and friends. May he rest in peace.

Vídeo Behind of the Scene 5

Vídeo Behind of the Scene 4

TOMORROW'S STAGE
REST DAY
Salta
Reaching the rest day represents a major intermediary goal on the Dakar. Some of the rally’s newcomers, who are conscious of how tough the challenge is, may even regard this as a tiny victory. So the riders and teams will be welcomed with the honours of a halfway podium at the bivouac in Salta, where a first celebration has been organised for them. Thousands of spectators are expected to come and discover the Dakar Village, as they did in Tucuman last year, where they will have the opportunity to immerse themselves in the world of the rally, take advantage of the great variety of entertainment and activities on offer and meet the race’s key figures. It will also allow the competitors to boost their motivation levels and recharge their batteries.