DAYTONA BEACH, Fla. (January 7, 2014) - AMA Pro Racing announced today the 2014 AMA Pro Road Racing schedule, featuring the full complement of classes at each stop on the circuit. The AMA Pro SuperBike, GoPro Daytona SportBike and AMA Pro SuperSport divisions will contest doubleheaders at each round in 2014, while the Vance & Hines Harley-Davidson Series will participate in one race final per weekend. 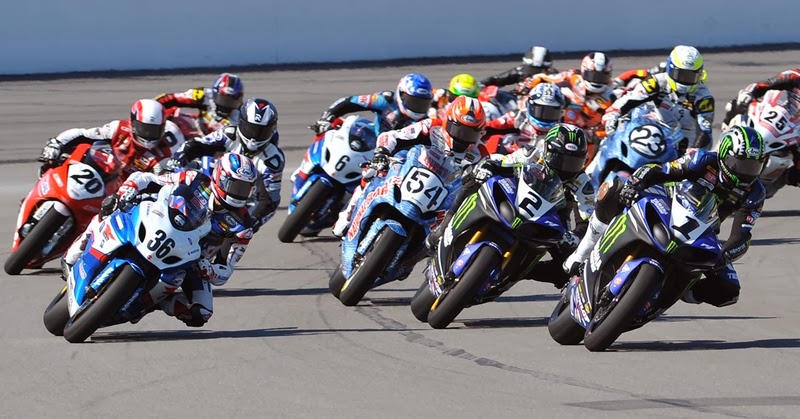 The 73rd annual DAYTONA 200 will kick off the season on March 13 - 15, 2014 at the legendary Daytona International Speedway in Daytona Beach, Fla.  America's longest running endurance motorcycle race will be contested on Saturday afternoon as part of a traditional three-day event weekend that is expected to produce thrilling racing action by some of the finest riders in the sport today. Josh Herrin and Martin Cardenas split AMA Pro SuperBike victories at Daytona a year ago, as they both benefited from a Josh Hayes bike malfunction that resulted in the three-time SuperBike champ exiting both races early. In the 2013 running of the DAYTONA 200, Cameron Beaubier dominated as he won the historic race by a whopping 22.254 seconds.

Next up, the series will be heading back to Road America in Elkhart Lake, Wis. on the weekend of May 30 - June 1, 2014. Measuring in at just over four miles as the longest circuit on the schedule, the classic track is sure to size up the competition as summer begins to kick in across the nation. Last season, Hayes recorded a clean sweep, winning both SuperBike races at Road America in convincing fashion, and the Mississippian will look to repeat his performance in 2014.

Fans in the Southeast will be pleased to know that the series will be returning to Barber Motorsports Park in Birmingham, Ala. on the weekend of June 21 - 22, 2014. The Barber event will be the first on the 2014 calendar planned with the recently announced two-day event schedule. As if the racing action isn't enough, the historic venue is also home to the Barber Vintage Motorsports Museum which contains over 750 vintage and modern motorcycles for avid race fans to take in over the course of the weekend. It was another clean sweep for Hayes in Alabama last season, as he barely edged out archrival Roger Hayden by less than a half of a second in both contests.

Dating back to 1962, Mid-Ohio Sports Car Course has been a well-deserved mainstay on the American road racing scene, and the legendary asphalt has seen some of the most exciting road racing action in the country. The two-day event weekend set to be held on July 19 - 20, 2014 is sure to be one of the most action packed of the year. The series will be heading back to Lexington, Ohio for the 32nd consecutive time to take on the 2.4-mile, 15-turn natural terrain road course for another set of exciting shootouts. Hayes and Herrin split victories in AMA Pro SuperBike competition at Mid-Ohio in 2013 while Beaubier continued his dominant march with another set of wins on his way to capturing the 2013 GoPro Daytona SportBike championship.

Round 5 will take place at New Jersey Motorsports Park on the weekend of September 13 - 14, 2014, marking the sixth consecutive season that the series has made the trek to the Garden State. The 2.25-mile track in Millville, N.J. has been a battlefield for competitors since the gorgeous grounds were opened in 2009. The 2014 contest at NJMP has also been scheduled as a two-day event. Former Monster Energy Graves Yamaha teammates Hayes and Herrin found themselves in a neck-and-neck battle here last year and each of the elite riders recorded one victory in the second-to-last event of the 2013 season.

A sixth event may be added to the 2014 AMA Pro Road Racing schedule in the coming weeks. Additional details will be released upon confirmation of the event.

The 2014 AMA Pro Road Racing schedule is as follows:
* - These events will feature the two-day event schedule