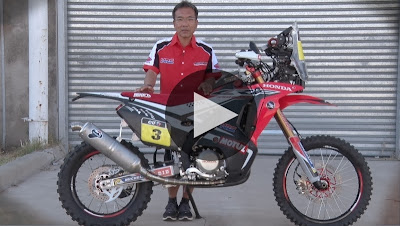 
TEAM HRC returned to Dakar Rally in January 2013, for the first time after a 24 year absence, aboard a CRF450 RALLY prototype based on the commercial CRF450X enduro model Honda. The 2013 Dakar Rally generated valuable information on key areas such as engine power, aerodynamic performance, durability and maintenance requirements, used as a basis for further design modifications and improvements.

The new model retains the electronic Fuel Injection (PGM-FI *), system that has shown proven performance in the harsh and highly variable environmental conditions of the Dakar Rally.

The new CRF450 RALLY will be used by the HRC riders in Dakar 2014 and will be available to other teams for motorcycle rallies later in 2014. The new model has a completely new engine, new chassis, new swing arm, plastics and three different petrol tanks with a total capacity of 35 litres. The power is increased and the overall weight is decreased in order to offer better and easier handling.

* PGM-FI is a registered trademark of Honda. 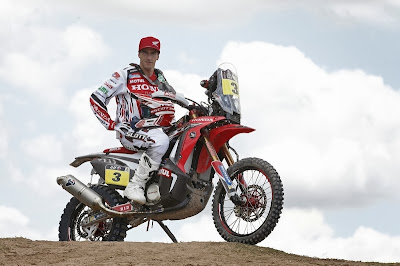 Joan Barreda is shown on the #3 Team HRC CRF450 Rally that he will use to contest the 2014 Dakar Rally, which gets underway on January 5. Barreda scored four stage wins in the 2013 version of the Dakar. Photo courtesy of Team HRC.