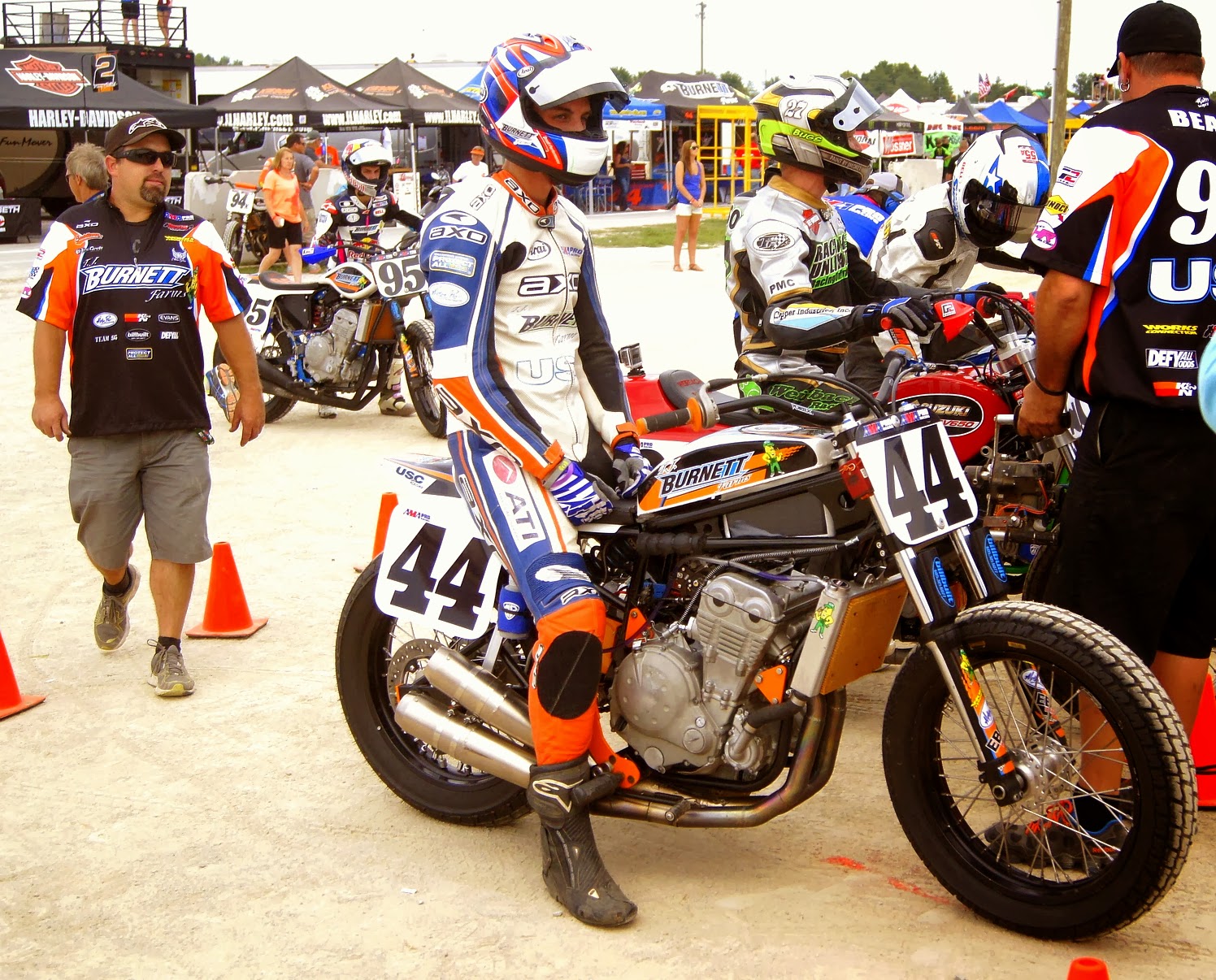 The official news hit the web this week as it was announced that Brandon Robinson AMA Grand National #44 had decided to split from his 2013 team of TJ Burnett Farms Kawasaki. Although the cat was let out of the bag to me back on December 18, I took the high road that I always try to take in putting out news and info to let both TJ and Brandon make their respective announcements before I would divulge what I had been let in on.

RRob44 will be going it alone along with his 2013 tuner James Hart as James Hart Racing/USC will pursue their 2014 AMA Pro Flat Track efforts on their own Kawasaki EX650-based Twins.

After a stellar season in '13, Robinson ended the season ranked as the 3rd-place rider in the season-ending standings after having a breakout year campaigning the Burnett Farms Kawasakis in the Twins and Singles classes. BRob's first big win came just two races into the new season when he took the team's KX450F to the Daytona Short Track II win in March, and then did what virtually has been impossible-largely due to scheduling-and stole the doubleheader at the Springfield Mile Labor Day weekend marathon round some 5 1/2 months later. Robinson's stat line was a stuff of AMA Pro Flat Track legends that also included six podium finishes, seven top-5 finishes and nine top-10 finishes to go along with those three big wins on the year. Worst finishes of 17th (Hagerstown) and 18th (Peoria) and a DNS at Castle Rock kept him from what could have been an even better career year.

In the shot above, Robinson awaits the first practice round at the Indy Mile on the #44 TJ Burnett Farms/USC/James Hart Racing Kawasaki during round 8 of the 2013 AMA Pro Flat Track presented by J&P Cycles Grand National Championship on August 17. Tuner and then-fellow TJ Burnett Farms Racing team member James Hart can be seen walking up behind BRob44, with part time team mate JD Beach #95 in the background. Weirbach Racing's Rob Pearson #27 sits to Robinson's left, while Burnett team wrench Billy Gruwell holds the starter motor for the #44 team. 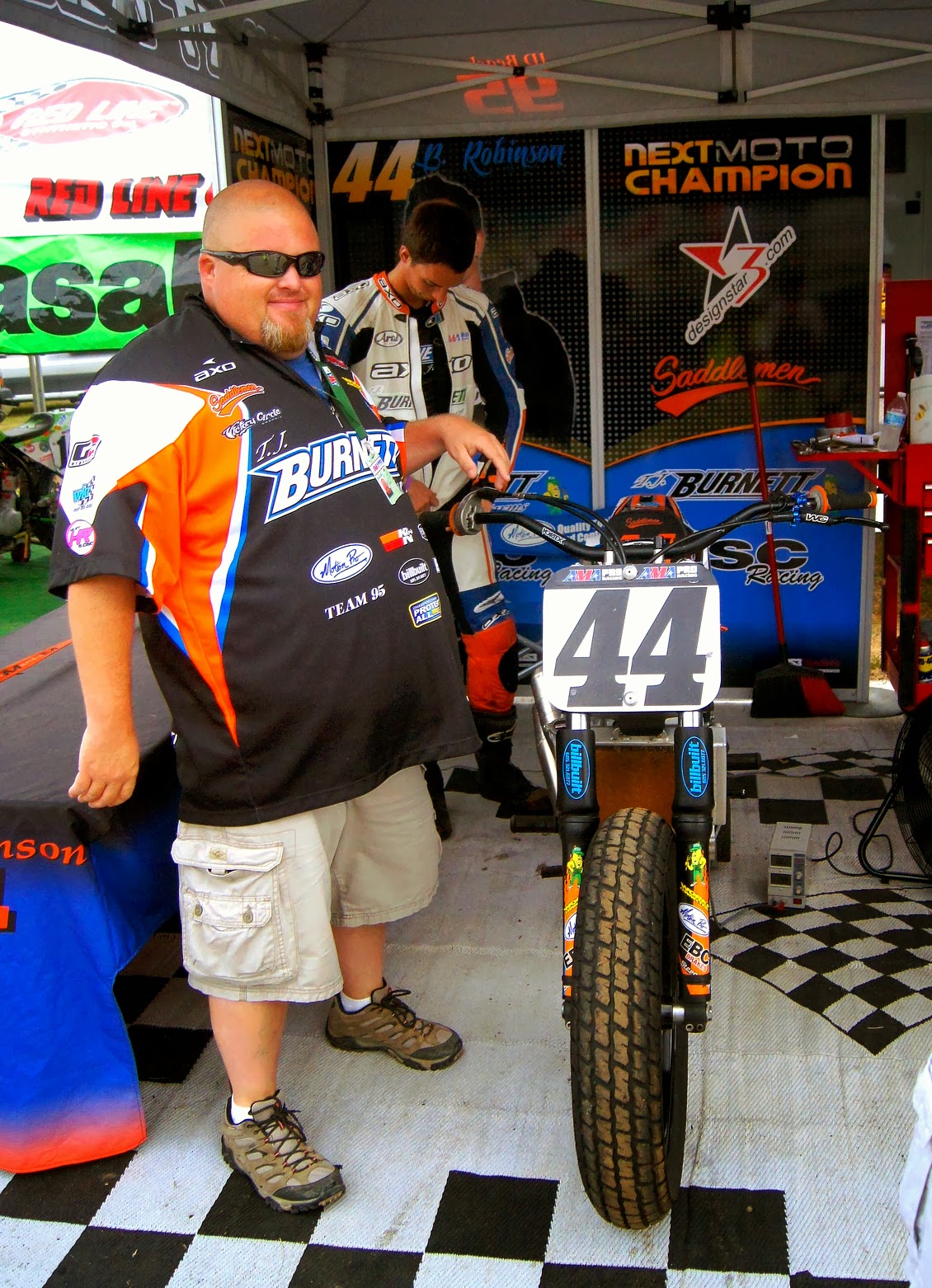 According to TJ Burnett, while attending to some health and family issues, some changes and decisions had been made that he was unaware of that led to the split with his team. However, Burnett promises to come back as strong as ever as he will be campaigning a Pro Singles Championship team for Pacific Northwest rider Davis Fisher, whom Burnett has been watching and working closely with for some time, grooming the youngster for his Pro debut coming up at Daytona in mid-March.

In the shot above, proud team owner TJ Burnett smiles as his rider, Robinson, suits up for the first practice session of the Springfield Mile II during round 11 of the 2013 AMA Pro Flat Track presented by J&P Cycles Grand National Championship season on September 1. Robinson had just stolen the show in front of a packed house on one of Burnett's rockets at the Illinois State Fairgrounds, and several hours later would be smiling even more as his riders would again place 1-3 (with Beach taking a second 3rd-place finish over the weekend) in what was the team's home race. Burnett hails from Opdyke, IL. located approximately 30 miles east of Du Quoin, another flat track mecca over the decades. At the end of the weekend the Big Man was close to tears after having taken wins in the biggest event of AMA Pro Flat Track's long history, and deservedly so.

In the rough and tumble world of The Rolling Thunder Show, the most competitive and greatest form of racing on two wheels in the world, it's very hard to duplicate the success as a complete team, let alone after switching teams from one year to the next. History tells us that in order to continue with that same level of success, teams and riders that stick together over the course of their careers have the best chances of maintaining, let alone replicating or bettering their levels of success.

But with the level of talent that the TJ Burnett Farms Kawasaki team put together for the 2013 season, 2014 and beyond should look extremely bright-with all things being equal-for all members of this strong group of people. With Robinsons's last couple of season having grown stronger not only when riding for Bill Werner/Jay Springsteen team in the 2012 season and then again with the TJB team last year, plus the tuning talents of James Hart in his corner, #44's season should be large and bright.

And the same can be said for TJ Burnett and his young protégé, Davis, who has shown the level of talent that would befit an owner such as the Burnett Farms team to take him under his wing to further progress him along the ranks of and as a Pro and future Expert-ranked rider. Keep an eye peeled for what this now-even younger team will and should do come March in Daytona, as this Burnett has a great eye for talent and could be ushering in the likes of a new Brad Baker, Ryan Wells or Jeffrey Carver, Jr. in terms of potential greatness.

You can check out the full press release below from Brandon Robinson, which actually came out early this last week announcing his teaming up with James Hart and USC as they go it alone for the 2014 AMA Pro Flat Track Grand National Championship season. And we here at Stu's Shots wish all members of both entourages the very best of luck in the coming season and in the future, and we'll be there to root them all on and shoot the stuff that we, and you, want to see from them all. Go get 'em guys!


Brandon Robinson Gears Up for Promising 2014 Season with USC Racing and James Hart Racing
Oxford, PA (01/07/2014) – Coming off a career best season in 2013, Brandon Robinson returns to the AMA Pro Flat Track series with a similar but slightly different program for 2014.  Robinson will be on Kawasaki 650’s and Kawasaki 450’s again next season tuned by James Hart with support from USC Racing, Hot-Shot Motorworks and James Stevens Racing.
Last season Robinson turned many heads as he finished 3rd in series points and claimed three victories during the season.  His wins came at the prestigious events Daytona Short Track and back-to-back Springfield Miles in the fall.  He scored additional podiums at the Sacramento Mile, Colonial Downs Mile, and the Indy Mile.  Robinson looks to improve on his success from 2013 and keep the momentum going into 2014 will a solid team built around him this off-season. 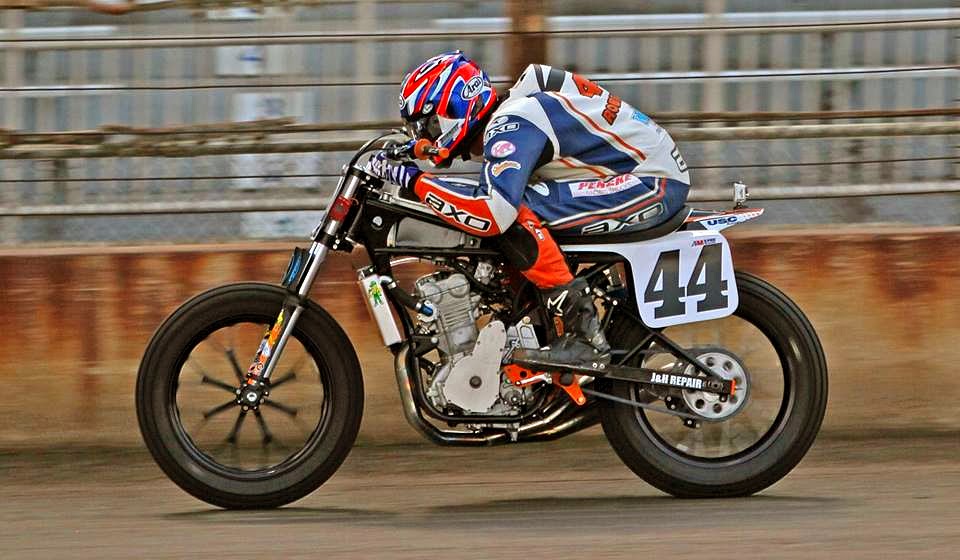 Brandon Robinson on the #44 TJ Burnett Farms Kawasaki is shown at speed at the Springfield Mile over the Labor Day weekend during rounds 10 & 11 of the 2013 AMA Pro Flat Track presented by J&P Cycles Grand National Championship season, where BRob44 completed the double over the epic weekend to add his name to a very short list of riders to have completed the double win at the historic venue located on the grounds of the Illinois State Fairgrounds. Photo courtesy of Brandon Robinson and James Hart/USC Racing.
“Excited would be an understatement. The 2013 season was amazing and I can’t thank my sponsors and team enough for helping me accomplish so much and getting one step closer to my dream of being Grand National Champion, “ said Robinson. “We have been really busy during the off-season getting the bikes ready for 2014. I didn’t think we could improve on what we learned last year, but I was wrong and I can’t wait to get these USC Kawasaki’s on the race track and compete again.”
The efforts will be strongly backed by USC Racing. USC Racing is owned and operated by Gerry Booher, a former Grand National racer. USC Racing has been a fixture on the Grand National Flat Track scene since 1969. USC has sponsored legends such as Ricky Graham, Terry Poovey, Bryan Bigelow and Kevin Varnes in past seasons.
James Hart Racing will return as Brandon’s mechanic for the 2014 season. James Hart Racing is owned by James Hart who has been involved in GNC Racing since 1988.  Hart is a former GNC racer who carried National #81 and was very successful throughout his career.  James will also assisted by his father Roy Hart who was a very competitive racer in his own right.  With James and Roy combined together they are very knowledgeable in race bike setup and reading the racetrack conditions to make necessary changes for a winning performance.  Notable riders James has wrenched for in the past include Johnny Murphree, A.J. Eslick, Robbie Pearson, J.D. Beach, and Brandon Robinson.
Hot-Shot Motorworks is a key component to the a promising 2014 season. The company is owned by Dan Thompson and is an engine design and development company that has designed many products for Hi-Performance Street and Racing motorcycle engines throughout their 40 years of existence. Dan Thompson has built and tuned for many notable racers throughout the AMA GNC Series since 1977.  After leaving the GNC Series in 1996 to concentrate on other engine development programs, Dan has decided to return to the GNC scene for the 2014 season to build a Kawasaki engine program for USC Racing, James Hart Racing and James Stevens Racing. Hot-Shot Motorworks has already designed many performance products for the Kawasaki engine that has allowed significant gains in engine performance from the team’s successful 2013 season.
James Stevens Racing has been a strong supporter and sponsor of USC Racing, James Hart Racing and Hot-Shot Motorworks for many years and will again be involved with support for the 2014 GNC Series. James has had helped many notable riders over the years including Jeffrey Carver, Kevin Atherton, Tripp Nobles, David Estok, Michael Barnes and Robbie Pearson to name a few.
The AMA Pro Flat Track season kicks off March 13th and March 14th in Daytona Beach, FL. Robinson and his team will also compete in the AMA All-Star Series during bike week at Ogelthorpe Speedway in Savannah, GA on March 7th and Volusia Speedway in Barberville, FL on March 9th.
For more information on Brandon Robinson, follow him on social media. @BRob44 on Twitter and Instagram ||Facebook.com/BrandonRobinsonRacing
Brandon Robinson 2014 Sponsors:
USC Kawasaki, James Hart Racing, Hot-Shot Motorworks, James Stevens Racing, R&D Machine, Arai, ATI Physical Therapy, Penske Racing Shocks, AXO, Go Pro,  Saddlemen, Pro Plates, Motion Pro, Royal Publishing, VC Graphix, DAO, PMP Sprockets, Spectro Oils, Wiseco Pistons, Cometic Gaskets, Lectron Carburetors, Evans Coolant, G2 Ergonomics, Works Connection, K&N, Impact Armor, Hartman Photography, Jim Chapman, Tom Scibek, Joe Reynolds, John Y, TJB, Mom & Dad
Brandon Robinson - GNC 44
15 Wood Valley Lane
Oxford, PA 19363
484-888-9485