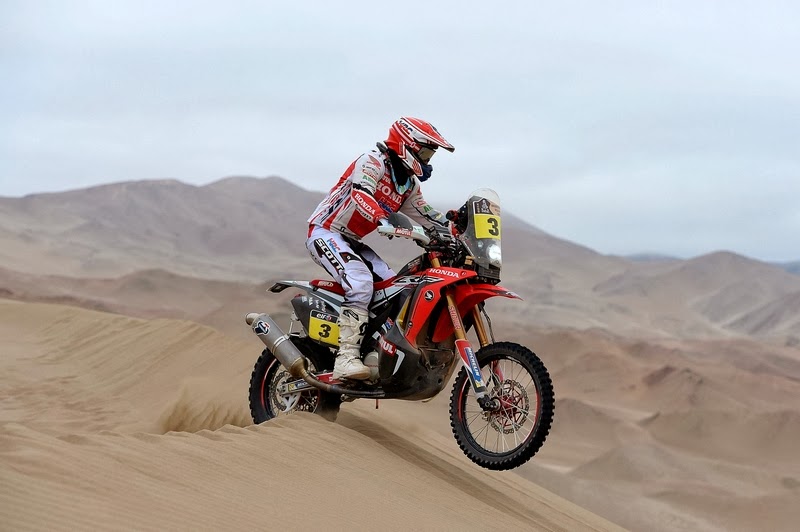 Spectacular double for Honda in tenth stage of Dakar 2014

It was a fourth stage win for Joan Barreda in the 2014 Rally Dakar, and a fifth victory for the Honda CRF450 RALLY, as the team completed the double with Hélder Rodrigues coming in second. Javier Pizzolito ends in 8th place.

The tenth stage of the epic Rally Dakar proved to be a really long but fruitful one for the Honda riders who stole the top two positions on the CRF450 RALLY. Joan Barreda dominated the Antofagasta stage with Hélder Rodrigues finishing the 688 km course behind him.

Joan Barreda had previously picked up a fifteen-minute penalty for speeding in a radar control in the special yesterday. The Sentinel alarm system that reminds the riders they are entering an obligatory reduced speed zone failed to sound, and the rider from Castellón, Spain, momentarily exceeded the limit. The penalty dropped Barreda to tenth place in the standings. From the outset today, he set about making up the lost time on Marc Coma, his direct rival, and by the end of the day had clawed back 11 minutes 26 seconds.

Hélder Rodrigues too, got off to a flying start, hotting up the pace from the previous outings as he seeks to secure a podium place. Barreda caught him up and the two crossed the finish-line together. In doing so, Rodrigues outruns his immediate rivals for the third place, and now occupies fifth overall position just 19 minutes off the podium.

Javier Pizzolito put in a good stage performance too, picking up his best result so far in the Dakar 2014, arriving in Antofagasta with the eighth best time on the day.

It was a good day for Honda Argentina Rally Team, who are being supported by Honda with the new pre-production CRF450 RALLY machine, with Laia Sanz continuing to break new ground for female motor sport. The Honda Argentina Rally Team rider finished the ninth stage of the Dakar in seventh place, which marks a best female partial classification so far to date in the rally. Today both Laia and team-mate Pablo Rodríguez finished a long gruelling stage in respectable positions after suffering some problems after a crash.

In addition to the distance, here the competitors will be put to the test by all the difficulties offered by the Atacama Desert… and will have to display all the qualities required for off-road races. After the mine tracks and the many rivers to cross, the competitors will have to distinguish themselves in the heart of the Dunes of Copiapo: the fastest motorcyclists are expected to spend seven hours behind the wheel. Needless to say that on this decisive day there will be no shortage of opportunities for competitors to make a winning comeback in the race. This will be the key stage of the 2014 edition.