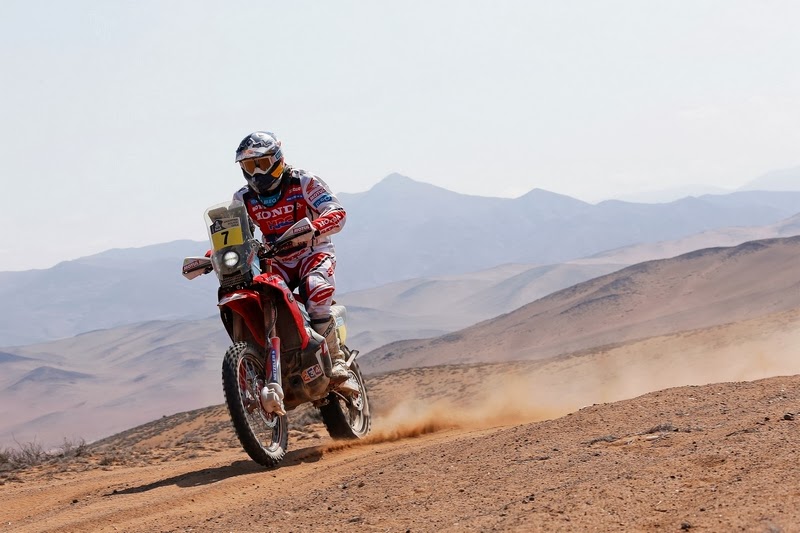 It was a troublesome stage for TEAM HRC in Copiapo, where Helder Rodrigues finished fourth and Javier Pizzolito tenth, on a day which Joan Barreda’s chances of taking a podium place in Valparaiso ended.

The penultimate day of the Rally Dakar was played out first over rocky terrain before reaching a 150 km stretch of dunas outside Copiapó. Towering dunes in which one had to pay strict attention to the navigation.

Portuguese rider Hélder Rodrigues rode into Copiapó aboard his Honda CRF450 RALLY in fourth place. ‘Estrelinha’ now lies in fifth overall place just ten minutes away from a final place on the podium. Rodrigues will battle it out every inch of the way before the race winds up in Valparaíso tomorrow.

Javier Pizzolito put in a good performance in the stage, with a tenth final place some 12’49” off the eventual winner.

Joan Barreda, after marking a strong rhythm in the first part of the race, arrived at the refuelling in second place. He crashes in the kilometre 264 of the special in the area of sand dunes around Copiapo. He was forced to repair the damage and, subsequently, was unable to continue at full-speed. The Spanish rider fought on to stay in the race and finish the special. Now, he moves to the seventh place in the overall.

Once again the commendable effort of the female member of Honda Argentina Rally Team, Laia Sanz, should be pointed out, finishing the penultimate stage in twelfth place, and thus scaling various positions on the overall leader-board. The Catalan rider is now in 14th. Pablo Gonzalez finished the day in 24th position.

Before admiring the hillsides brought to life by the houses in Valparaiso, the competitors will have to climb the hills planted with cacti during the rally’s last special stage. The pride and joy of crossing the finish line is drawing closer, but the statistics are formal: every year one or several drivers come unstuck during this final exercise so prudence is required! Even this close to the finish, vigilance is the competitors’ best ally to ensure their presence on the final podium.