PICKERINGTON, Ohio -- January 22, 2014 -- The country's fastest amateur dirt-track racers, who one day will dominate the professional ranks, will go head to head this June 23-26 at the 2014 AMA Dirt Track Grand Championship in Springfield, Ill. 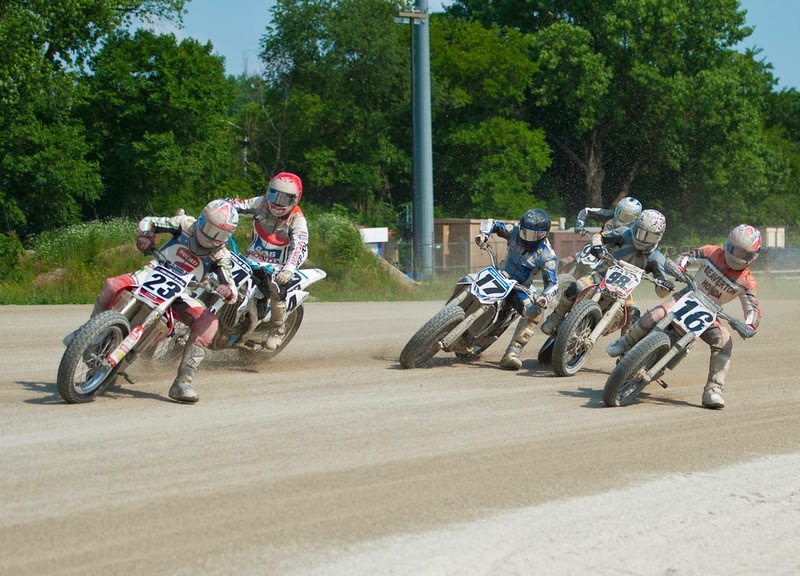 Riders are shown in action on the half-mile at the Illinois State Fairgrounds in Springfield, IL. during the 2013 AMA Dirt Track Grand Championship event. The event will be returning to the mecca of flat track racing in June 2014 and again will be promoted and captained by one of the greatest in the business, Steve Nace Racing Promotions. Photo courtesy of the AMA by Yve Assad/The Fast and Dirty.com.
"Since 1975, the AMA Dirt Track Grand Championship has recognized the best amateur dirt-track racers in the country with national titles," said AMA Track Racing Manager Ken Saillant. "This event is one of the oldest and most prestigious amateur motorsports championships in America, and we're thrilled to once again return to Springfield, Ill., home to some of the sport's most historic moments."

Steve Nace of Steve Nace Racing will promote the event.

"We are excited to return to the Illinois State Fairgrounds in Springfield for the 2014 AMA Dirt Track Grand Championship," Nace said. "With the rich history of AMA Grand National Championship motorcycle racing and the talent we have seen in the past year in the up-and-coming younger racers, it will be an exciting week of racing as each rider will have as his or her goal the right to be called an AMA Grand Champion."

Monday, June 23, will feature competition on the mile. On Tuesday, June 24, racers will head to the short track during the day, while youth riders will compete on the TT that evening. On Wednesday, June 25, all racers will have a turn on the TT course. Then, on Thursday, June 26, the half mile will take center stage. June 27 will be used as a rain date if needed.

Online entry is available at www.stevenaceracing.com.

In addition to championships in individual disciplines, AMA Grand Championships are awarded to the riders in each class who have the highest point totals across all four types of dirt-track racing. The fastest riders in premier classes also compete for the AMA Dirt Track Horizon Award, which honors the amateur racer poised for success on the pro level.

For more information about dirt-track competition, see the Racing section of www.americanmotorcyclist.com.
About the American Motorcyclist Association
Founded in 1924, the AMA is a not-for-profit member-based association whose mission is to promote the motorcycle lifestyle and protect the future of motorcycling. As the world's largest motorcycling rights and event sanctioning organization, the AMA advocates for riders' interests at all levels of government and sanctions thousands of competition and recreational events every year. The AMA also provides money-saving discounts on products and services for its members. Through the AMA Motorcycle Hall of Fame in Pickerington, Ohio, the AMA honors the heroes and heritage of motorcycling.
For more information, visit www.americanmotorcyclist.com.