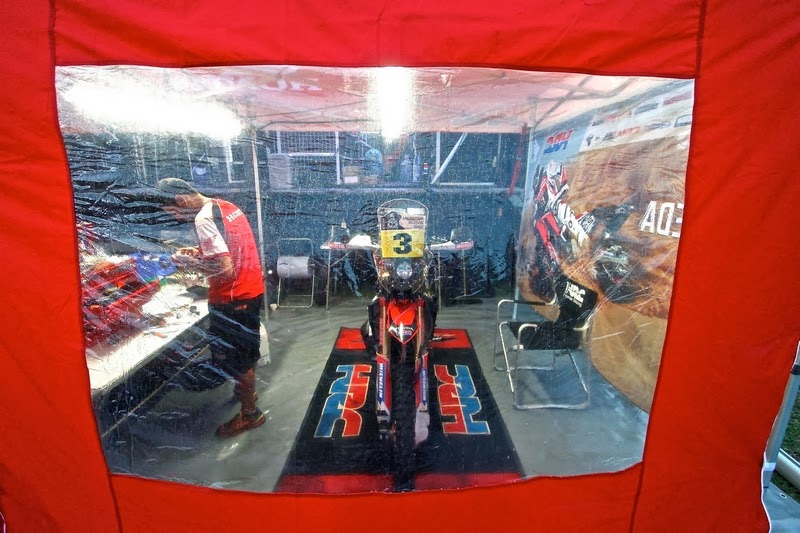 The first week of Rally Dakar 2014 is out of the way, and TEAM HRC is taking a well-deserved day-off before week two of the competition begins.


It was rest day in Salta, Argentina with a lay-in for the riders, which will come as a relief after the early hour starts. Less so for the mechanics who took advantage of the break to go over the machines, while the riders faced the press and the many fans who have travelled up to the Dakar Village to meet them in person.
The members of TEAM HRC already have their sights firmly set on the final part of the rally as the competition enters the unchartered territory of Bolivia. Salar de Uyuni plays host to the opening leg of the Dakar 2014’s second marathon stage.
On paper the team’s overall situation looks positive. Joan Barreda is second overall with two stage wins, and Hélder Rodrigues has fought his way back to eighth place on the leader-board. Javier Pizzolito, too has been working hard for the team and will be looking to climb positions as the number of dunes and sand increases.
Honda is also supporting other riders with the pre-production models which will go on sale to clients in 2014. Honda Argentina Rally Team with Laia Sanz and Pablo Rodríguez improve by the day. The World Trial and Enduro champion is in 19th, and Pablo Rodríguez is in 33rd position.

The second marathon stage will begin for the riders of motorcycles and quad bikes, who will be savouring the first visit of the Dakar to Bolivia. When they enter the country the riders will experience a visual shock and will also be perturbed by the maze of tracks through which they will have to navigate. In these steep mountainous areas, the beauty of the setting and the variety of colours will not make the task ahead any easier. The few villages which will be idly crossed will, on the other hand, provide them with perfect waypoints. To reward their diligence, they will be able to head for the bivouac in Uyuni, set up on the edge of the salt flat… at an altitude of 3,600m!