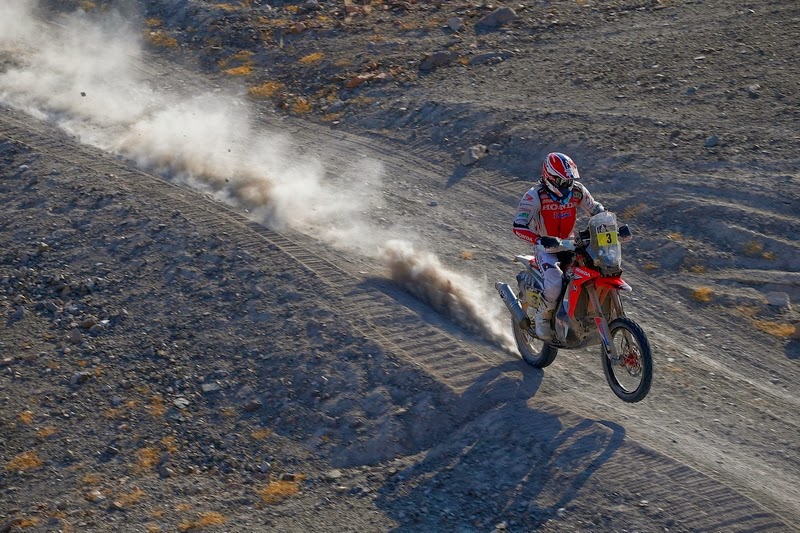 Joan Barreda closes the Dakar with another victory, the sixth for the new Honda CRF450 RALLY

The Rally Dakar 2014 has run its course. It was a fight to the finish for the TEAM HRC riders as the 36th edition of the world’s toughest race drew to a close. Hélder Rodrigues finished the highest of the Honda riders in fifth place, with Joan Barreda in seventh with five stage victories under his belt. All the Honda CRF450 RALLYs finished the gruelling rally with the same engines, signalling a huge success for the brand and highlighting the machine’s great potential.

Fifth overall place in the Rally Dakar went to Hélder Rodrigues. The Portuguese rider nearly went from zero to hero aboard the Honda CRF450 RALLY, beginning the opening days with stomach problems and still having the chance of a podium place on the last day.
Joan Barreda last night arrived back at the bivouac in La Serena exhausted after finishing the 349 km liaison thanks to the help of another rider who accompanied him back to the camp. Barreda had taken a heavy fall at kilometre 265 of the special, where the front end of his Honda CRF450 RALLY received some heavy damage. The rider was forced to stop and check the state of the different navigation components before hitting the road again. Nevertheless, in trying to make up for lost time, he fell again, this time causing an electrical problem, which required him to seek assistance from a fellow-rider.
Today, after the mechanics fixed up the damaged bike parts, Joan Barreda was off again, storming home to victory once more. The rider from Castellón, Spain has now chalked up a total of five victories, and finishes in seventh overall position. 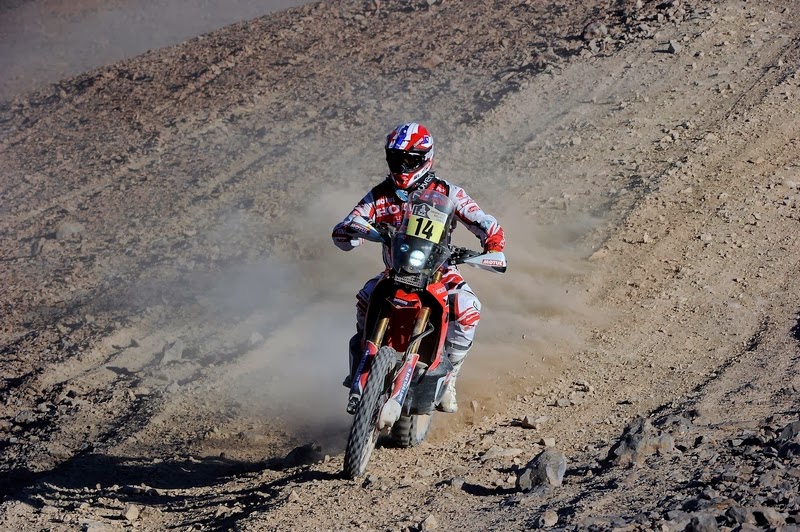 Javier Pizzolito finished his fifth Dakar. The Argentine rider proved himself to be consistent in the latter part of the race, finishing two stages in the top ten. The ‘water carrier’ of Hélder Rodrigues finished the rally in 23rd place .
Sam Sunderland, the winner of the second stage, was forced out of the race in the fourth round after a fall which broke the exhaust, causing overheating and meant that he was unable to finish the marathon stage.
Portuguese Paulo Gonçalves finished three times in the top ten over the course of the first four days, but on a dreadfully tough fifth day some dry shrubs got caught up in his exhaust and set the bike on fire in dramatic fashion. He could only watch helplessly as the flames engulfed the machine.
TEAM HRC is enormously satisfied with the job done by riders Laia Sanz and Pablo Rodríguez from Honda Argentina Rally Team, and Jean DeAzevedo from Honda Brasil Rally Team. Laia Sanz finished in seventh, the best stage finish for a female in the Dakar, and 14th overall on the Honda CRF450 RALLY pre-production model that will be available to rally riders later in 2014. Pablo Rodríguez improved in the final stages finishing in 32nd place. Jean DeAzevedo had to retire in the fourth stage after an incident where the sump took a heavy hit from a rock.
Laia Sanz: "As the race went on I started to realize that I was further ahead than I had expected. I was very surprised to find myself up against people that before I hadn’t seen. I had a problem one day with a waypoint but for the rest I’ve been very consistent and I’m pleased about it". 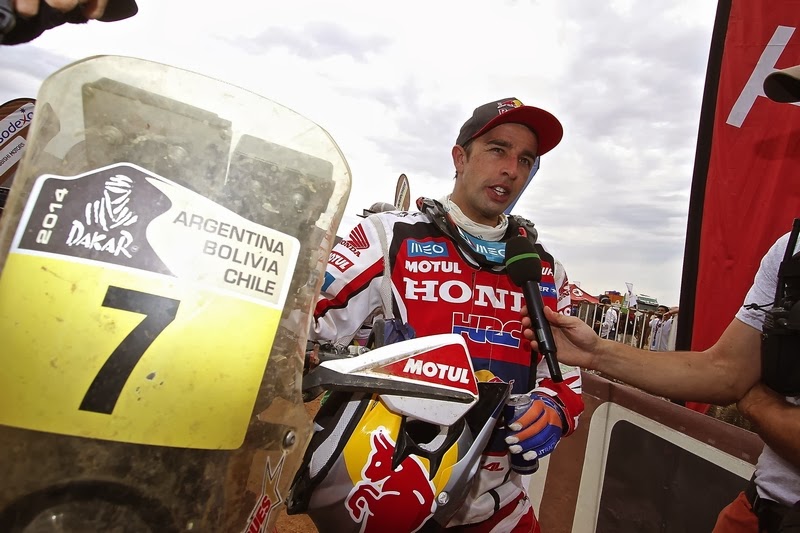 Pablo Rodríguez: "I’m very happy. It has been a very tough race but we’ve managed to finish. The bike was excellent and caused no trouble at all. I was able to come back in a couple of stages and do a good job. You’ve got to learn from some mistakes and keep looking to improve things".