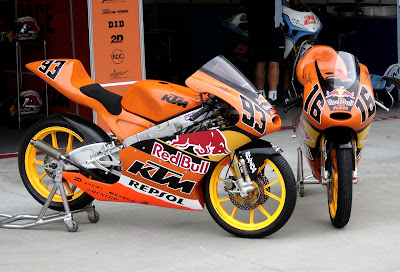 With the demise of the 250cc ring-ding class in MotoGP World Championship racing after the 2009 season, it was announced over the weekend after the rules commitee meeting of the MotoGP technical minds in Assen that after 2011, the 125cc class will also go the way of the Edsel. As has been suspected since the original talks to do away with the 250's, it was only a matter of time before their younger brethren were also cast aside like an old, oily rag. Or wag....

You can read about it here thanks to the excellent MotoMatters.com website and the most excellent helmer of that site, one David Emmett. Mr. Emmett runs a super operation and has a world-class photographer in Scott Jones, as well, to help with all the eye candy that is MotoGP racing. Check them and the news out here: