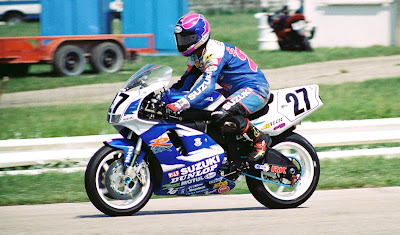 While perusing the internet of the usual suspect websites while trying to dig up some half-way interesting news to comment about this weekend, I came acrossed the following article penned by the super Chris Martin over at SpeedTV.com.
Chris makes some damn fine points about how the U.S. or AMA American Superbike (it's AMA Superbike--let's just leave it alone at that!) series has been looked down upon from across the pond as of late for a feeding ground for rider talent to nourish and move up into World Superbike or eventually the MotoGP series. While attending the Miller Motorsports Park round of World Superbike over the Memorial Day weekend, Chris got the opportunity to talk with some of the higher ups in WSBK, and got an earful on how or what they thought about the AMA series as of late since all of the problems that were stirred up in and around the series when the DMG people took over. And it's not real positive.
In spite of the 'let's make happy'-stance that has helped the AMA series to look more positive since the first of this year, the damage created by the series under the helm of Roger E sent some pretty negative vibes and smoke signals to the European crowd in how they viewed AMA Superbike as a feeding ground for talent. And how they still feel that way in spite of those positive changes this year. Once considered one of the major proving grounds for racing in Europe, the AMA series is suffering badly due to mis-management problems from the recent past, let alone the economic fall out we have all seen. And rebuilding what once was may prove to be even harder now that the negative ripple has had it's effects.
This is well worth the time to check out to see what Chris heard about how the AMA series is looked upon now from afar. They may have to rebuild Rome if this is any indication of the damage that the Daytona Motorcycle Group has inflicted in their dumming down of the series in the last two years. They've been on a positive path this year, but this could be a long journey.

Read on and thanks to Chris Martin for penning this article over at SpeedTV.com: