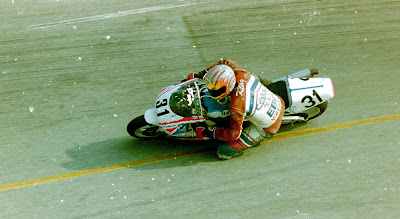 Fritz Kling on the #31 Gold Hill Yamaha 1000 comes through the last turn before coming back onto the front straight at the old Indianapolis Raceway Park (IRP-now ORP due to O'Reilly Auto Parts monetary involvement) on his way to winning both WERA Pro Series/FUSA events back in July '92. Fritz completely spanked the field in both events that summer at one of the tracks that he had some of his biggest success at-the other being Grattan Raceway outside Grand Rapids, MI. Grattan was really considered his home track since he was from the Lansing area, but he placed on the podium many times in WERA competition at IRP as well.
IRP/ORP hasn't hosted any motorcycle road racing events in some time now-probably a couple of years after this event. Around that time Putnam Park opened outside Putnamville, IN., and the races were slated over there. This was about the time that the NHRA took over control of IRP. It's a shame as from the time I saw my first road race at IRP in the mid '70s I was hooked on it big time. Back then I was within 15-20 minutes from the track. Now I'm less then five and no more road racing.
------------------------------------------------------------------------------------------------- 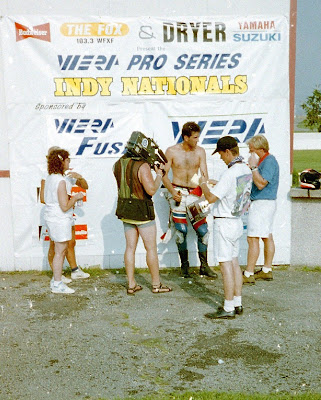 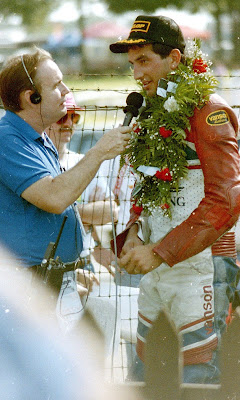 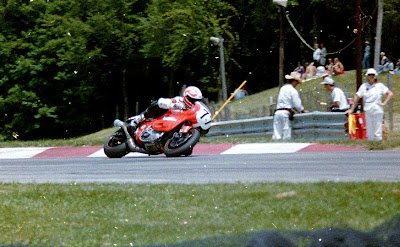 -------------------------------------------------------------------------------------------------
Fritz Kling was drafted onto the Harley Davidson VR1000 AMA Road Racing team as a team mate to Miguel Duhamel in the 'early' hours of the VR's run in AMA competition just after Daytona in '94. Riding the #77 machine at Mid Ohio, above, during practice or qualifying for the '94 event, Fritz didn't have the success that Miguel did that weekend (Miguel put it on the front row of the national and led the first few laps), but neither did Doug Chandler, Chris Carr (okay, CC did put it on the pole at Pomona in '95), Scott Russell, Pascal Picotte, or Mike Smith. And those were just the list of guys that rode the VR on the factory team. Jamie James, Tripp Nobles and several other riders competed on the VR for Don Tilley, among others, with far less success. This didn't seem to matter to Fritz as it still seemed like whenever he got off the bike he still had the big kid-like smile on his face. He always projected the feeling that he was just glad to be there, in spite of the bike's major short-comings.
-------------------------------------------------------------------------------------------------
Fritz Kling was a motorcycle road racer out of the Lansing, MI. area, that was born on June 10, 1967. He was a regular WERA and AMA competitor for teams such as Gold Hill, Dutchman Racing, Harley Davidson as well as his personal sponsors College Bike Shop out of the Lansing area (just to name a few). He always seemed to have a smile on his face, and almost always seemed to be up towards the front of a motorcycle road race event. Among his many accomplishments were his '89 Michigan Grand Prix Championship at Grattan Raceway, just outside of Grand Rapids, MI., in the WERA series, and winning several events that I attended at IRP back in the '80s and early '90s.
Other then when I did an announcing gig at IRP for the WERA folks in the fall of '87 and got to hand out the trophies at the end of the weekend's events-I handed a few over to Fritz that day as I remember-I only had the pleasure of meeting and/or talking to him one or two times over the years. In October of '90 I went down to Road Atlanta for the WERA GNF's with an old time friend (Jim Knipp, another long-time WERA Champ and racer) to hang out, help out where I could, and take a few pictures along the way. We were fortunate enough to run into Fritz at a local eatery and my friend Jim introduced us formally that evening and he had that big smile that evening just as I had seen it on him many times before at the race track. And always a positive and friendly attitude to boot. He had one of those endearing personalities that would stay with you and just make you feel good you got a chance to speak to and with him.
Unfortunately, Fritz lost his battle with brain cancer on November 7, 2008, and won't be around tomorrow to celebrate his 43rd birthday with his family, his friends or his race competitors. Not unlike the way he battled on the track, his race against the cancer that took him away from us was just as fierce. But unlike his battles on the track, we are the ones who lost out when this battle was won by The Man who called Fritz home before his time should have been due.
Tomorrow I'm going to take a moment of silence to remember Fritz Kling, as the good guy and fierce competitor that he was.
And I'm going to remember that killer smile of his as well and remember how blessed we all were to have been in his presence to see the fun loving guy he was and the positive vibe he projected on AND off the track. And I'm going to remember the giant he was among people, let alone racers, literally and figuratively.