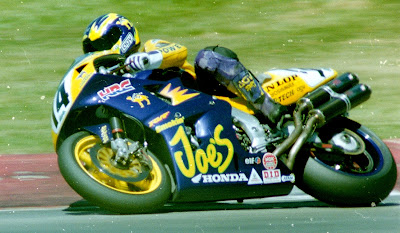 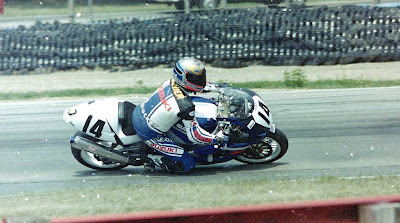 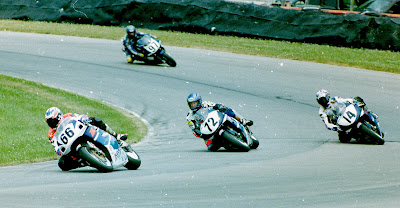 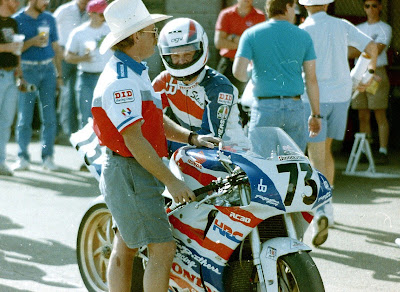 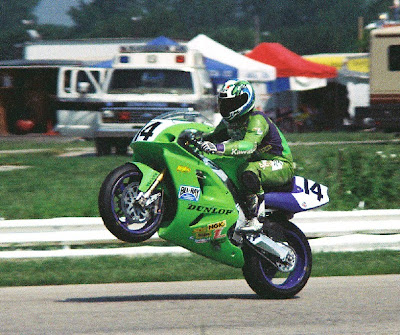 Steve Crevier is one of the easiest going, and most animated individuals to ever hit the AMA Road Racing scene, and he is celebrating his birthday on Friday June 18, and Stu's Shots justs wants to tip the helmet to this great racer and all around fun guy.

Crevier, who currently resides in Maple Ridge, BC, CA., was born in 1965, and competed in the AMA Road Racing series for over a decade starting in '92 (at least that's when I started seeing him around the U.S. races) for teams including Two Brothers Racing, Team Muzzy and the Smokin' Joe's Honda team. While campaigning Team Yoshimura Suzukis in '98 and '99, he won the '98 AMA 600 Supersport Championship (while also winning the '98 Mid Ohio round of the series). He added that championship to go along with his six Canadian Superbike Championships, four 600 Canadian Championships and three 750/Open Production Canadian Championships. Can you say winner?!
One of the more animated people on/off the track, very rarely have I ever seen the man at a race without a big smile on his face and laughing and carrying on about something jovial. And Crevier never fails to perform on the track, especially with his race-ending stoppies and smokies and wheelies. Never a dull moment when he is near or on the track, it is a pleasure to watch him get it on while racing and while on the cool off lap! The man is a 3-ring circus in and about himself with his antics, and he's always shown the crowd a great time.