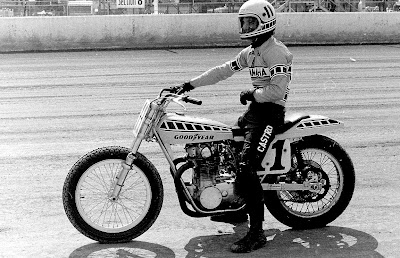 In what comes as great news to fans of flat track, and especially Stu's Shots, it was announced yesterday by the AMA Hall of Fame that former National #11, Don Castro, would be inducted into the Hall this November as one of it's 2010 members.
Castro, who is best known for competing on the Triumph and Yamaha factory squads, as well as riding for Erv Kanemoto in the '75 season aboard the Kawasaki H2 750-based Champion-framed flat tracker, now runs a motorcycle and ATV-based service center in Tres Pinos, CA., just east of Salinas, CA. and south of San Jose.
Back in the summer of '74, my old buddy Dick Jones dragged me to my first flat track race over in Terre Haute, IN. Donnie was competing that day as a member of the Team Yamaha Triple-Threat AMA Flat Track team alongside Kenny Roberts and Gene Romero. While also feeling like the kid that had found sex for the first time in his life (where has THIS been all my life!?), I was also able to get up close and 'somewhat' personal while perusing the pits with many of the stars of the day. Although I never had the pleasure of meeting him personally, the man always had a smile on his face and truly looked excited and happy to just be there and on the track. When Billy Schaefer, former National #96, won his semi race for the day to make the main, the whole Yamaha squad came over into Billy's pits where we were hanging out, to look over his privateer Yamaha that he had just won on. It was pure heaven for a kid of 17 who had also just found pure heaven in the form of AMA Flat Track racing.
And as I remember, Castro had one of the biggest smiles on his face as he checked out the competition. That smile will be stuck with me for the rest of my life.

Congrats to Donnie Castro for this big and super announcement, and we will be looking forward to November for the induction ceremony in Las Vegas to see #11 get his due after all these years. Very cool!

Here's the official release from the AMA Hall of Fame on this super exciting news: