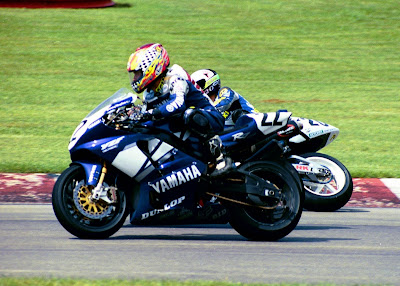 Tommy Gun Hayden found out what it takes to get on the top rung of the ladder at Fontana earlier this year in AMA Superbike action, and showed again yesterday at Road America he hadn't forgotten where that was in taking the second of two race wins at the sprawling Elkhart Lake track. Josh Hayes on the Team Graves Yamaha won race one action and going into the summer break trails Tommy by one point in the standings with five rounds and ten races left on the schedule. Both riders swapped finishing positions, and near-like close finishes as well in the premier class events.

You can read the race write ups below thanks to the worthy pen of Henny Ray Abrams over at CycleNews.com and the full results as posted over at RoadRacingWorld.com. AMA Pro Road Racing's points standings link is below as well.