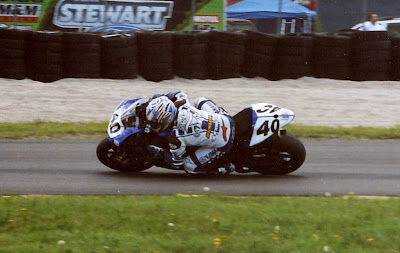 Jason DiSalvo pours it on the #40 Graves Motorsports Yamaha YZF-R1 during AMA Superstock practice at Road America in June of '06. This is out of turn 8 before the run under the bridge into the caraousel at the flowing four mile plus track that sits about 60 miles north of Milwaukee in beer and cheese country. This is also one of the best places left to take pictures unless you have deep enough pockets to pay for the super photo ticket offered. I don't.
DiSalvo last raced in the AMA series last year, and after trying to broker some deals to race in the States again for 2010 that apparently fell through, ended up in the World Supersport Series that runs in conjunction with the World Superbikes. Unlike his team mates, Jason never seemed to 'come to grips' with the Triumph triple-based Daytona 675 models, and had a best of 8th earlier in the year down under. Hopefully he can put something solid together that will see him racing in front of his U.S. fans in the near future.
-------------------------------------------------------------------------------------------------

For you Jason DiSalvo fans, unfortunately it was announced yesterday that he has parted company with the ParkinGO Triumph BE-1 World Supersport team that he had raced for since the beginning of the season. With Chaz Davies as his team mate, Jason never seemed to get the feeling of the machine that Davies has found (Chaz currently sits 4th in the championship) and always seemed to struggle with not only learning new tracks, but getting acclimated to the nuances of the three cylinder machine. Or so it seemed.
Whether that is really the case or not, or it was communication-related (or not) it sounds like it was an ammicable split. And things aren't always what they seem on the outside of any situation. Obviously Jason hasn't forgotten how to race motorcycles--see his vast and numerous past accomplishments for Graves alone to confirm what kind of record he has in AMA racing.
So you really can't say 'it was the team's fault' or 'it was Jason's fault.' S..t happens in racing just as in life. And you deal with it, better yourself as a result of it, and move on.
Personally, I can't wait to see J.S. back on U.S. soil again and racing his heart out as he always did here over the years. We know some lucky team or owner is going to come along and put the talent with the machinery. And we'll be there to cheer them on!

You can read the official press releases from both sides below.