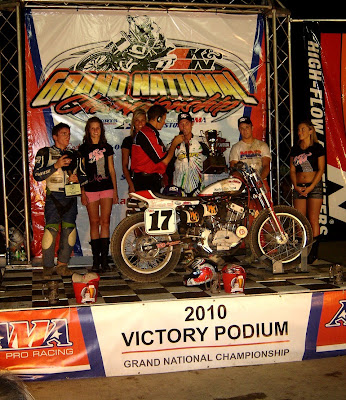 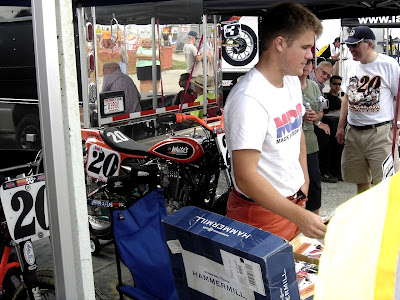 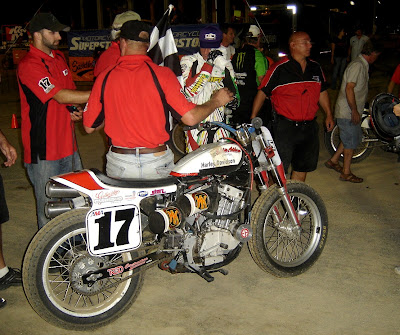 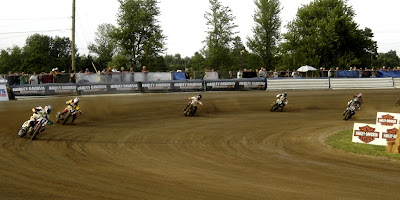 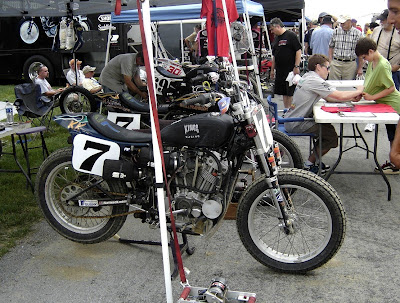 -------------------------------------------------------------------------------------------------
The AMA Pro Flat Track K&N presented by MotorcycleSuperstore.com Grand National circus made it's annual stop in Lima, OH. on Saturday June 26, and the competition was just as hot and dusty as the weather was for the evening's events.
Henry Wiles showed 'em that he isn't just a short track and TT specialist by winning the main event by over 6.5 seconds on second place Sammy Halbert. Wiles also won the '09 season-ending half mile at Pomona back in October and is quickly putting to rest the notion his big bike program needs work. At the end of the evening, the only thing his big bike program needed was a good bath after lapping up through ninth place in his rout of the field at the dusty Lima track.
With his second win in a row after taking the main at the Gas City short track last weekend, Henry takes a share of the overall points lead with Joe Kopp at 129 points each.
A big tip of the hat and helmet goes out to third place finisher Matt Weidman out of the State of New York. The '08 Rookie of the Year put on the box in third place after battling it out with veterans Jake Johnson (5th place), Jared Mees (6th place) and Bryan Smith on the Werner Springsteen #42 Kawasaki (4th place). It was young Matt's first GNC podium and it was well fought and deserved. He put on a fine show in working his way up to the last rung on the box and had a smile as big as the State of New York when the main was over. Look for this young man in the future to move it up even further. He left Lima in 12th place in the points after this fine showing.
The AMA Flat Track team of Mike Kidd and Steve Morehead did a great job of getting the program off without many delays, and at the end of the evening the track was in the best shape of the day after working the watering and dragging crews throughout the night. Hats off to all for doing such a fine job of keeping on top of what started as a real rough track.
The Rolling Thunder show hits Lake Odessa's I-96 Speedway in Michigan for another half mile event after the national holiday on Saturday July 10. Stay tuned for more WFO fun!

Here's the official story of the race from Larry Lawrence over at Cycle News.com:


Thanks for coming by to check out our mini race review.
Sorry I was a little late in getting this up but it was a long weekend here in Indy. Stay tuned for later in the week as I do a 'photo parade' of other notable entries and riders from Lima to highlight this great season of AMA Flat Track!
Thanks again!