With just three events left and only one mile race remaining in the 2014 AMA Pro Flat Track Grand National Championship, tomorrow's round 14 of the season at the Springfield Mile II could very well hold some of the final cards to be dealt in terms of which of the three riders left in the championship battle walks away with the best hand before heading west for the final two half-mile races of the season.

With just 18 points separating the three title contenders with a realistic shot at the championship, tomorrow's final mile race will undoubtedly lay the final groundwork in the fight for the 2014 AMA Grand National Championship. And as everyone knows by now, those fighting to keep championship points leader Bryan Smith from claiming the double at the Springfield Mile II tomorrow will have to bring their best 'A' game in order to keep those title aspirations alive heading into the final two events of the season on the left coast.

In the shot above, riders line up and ready themselves to do battle at the Springfield Mile I on May 25 in round 3 of the 2014 AMA Pro Flat Track Grand National Championship.

Third row (L-R): Johnny Lewis on the #10 KTM/GE Capital/Waters Autobody-sponsored KTM LC8 950 and Dustin Crow on the #61 Greg Crow Racing/Gardner Racing/Harley-Davidson of Salina-backed XR750 bring up the back of the field in the 18-rider National main.

We could go on about all of the possibilities that could transpire tomorrow at Springfield, but most of them have been hashed around that at this point it wouldn't add much more fire to the burning of the outcome in what will undoubtedly be another great event, so if any way possible you can be there tomorrow, you need to do so or you will miss one of the premier events of the season put on by AMA Pro Flat Track and the great promoters of the Springfield Mile, the Illinois Motorcycle Dealers Association. And like all of the other races this season, if you can't, FansChoice will have you covered--but nothing like being there!

We wish everyone good luck, safe and fast racing as we get ready to close out the Midwest portion of this year's AMA Pro Flat Track Grand National Championship! 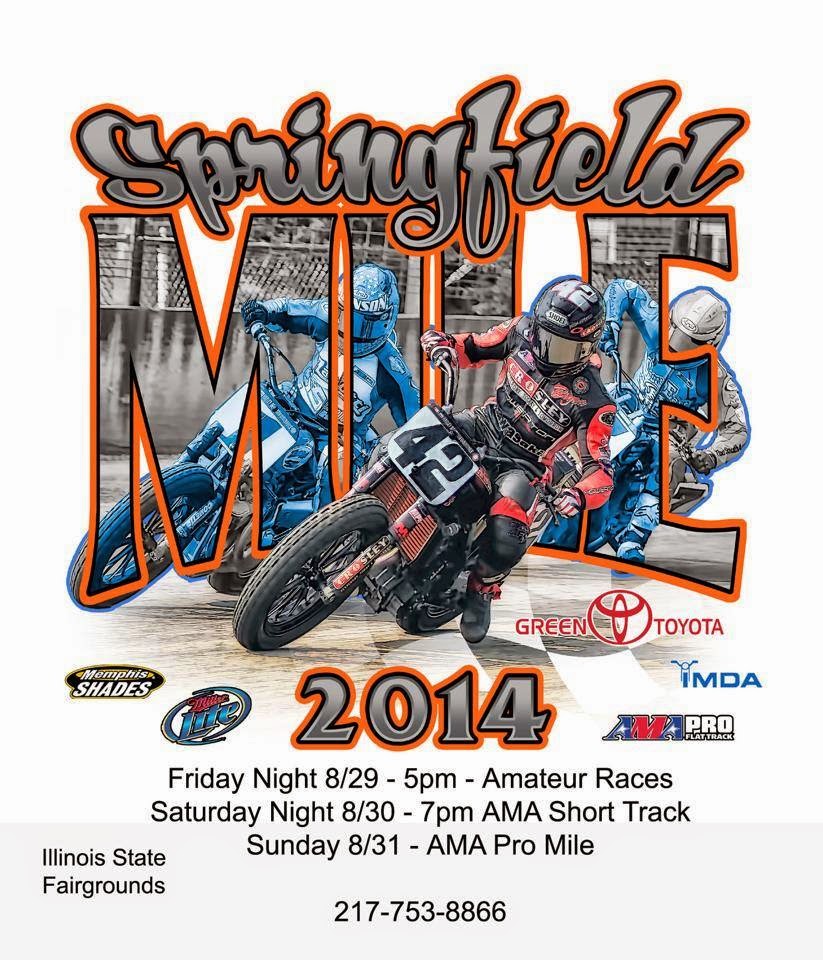