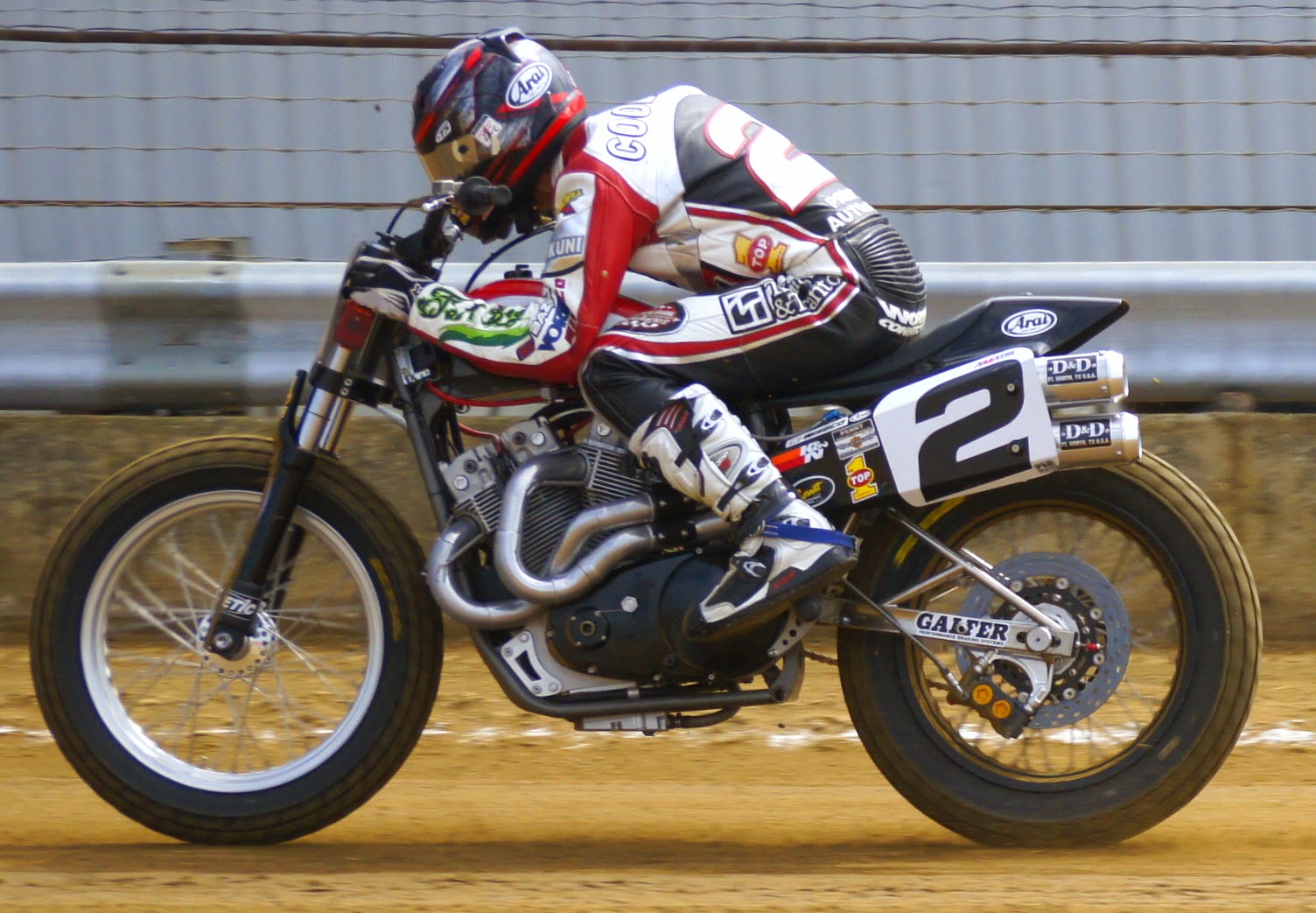 Round 11 of the 2014 AMA Pro Flat Track Grand National Championship at the legendary Indy Mile was the first of a stretch run to the championship for the regulars on The Rolling Thunder Show, in which Kenny Coolbeth, Jr. took the #2 Zanotti Racing/Moroney's H-D/Burt Ives Honda-sponsored H-D XR750 to the win under the lights of the Indiana State Fair as a backdrop. Coolbeth won his first mile since the Minnesota event in late 2011 and also earned the 32nd AMA Grand National victory of his career, as well as breaking the mile win streak held by Bryan Smith's Kawasaki since the Virginia Mega Mile in August 2013 when Jared Mees last took an XR750 to a win on a big track.

But there were many other stories to be told at Indy, and we have some brief glimpses at some of them. 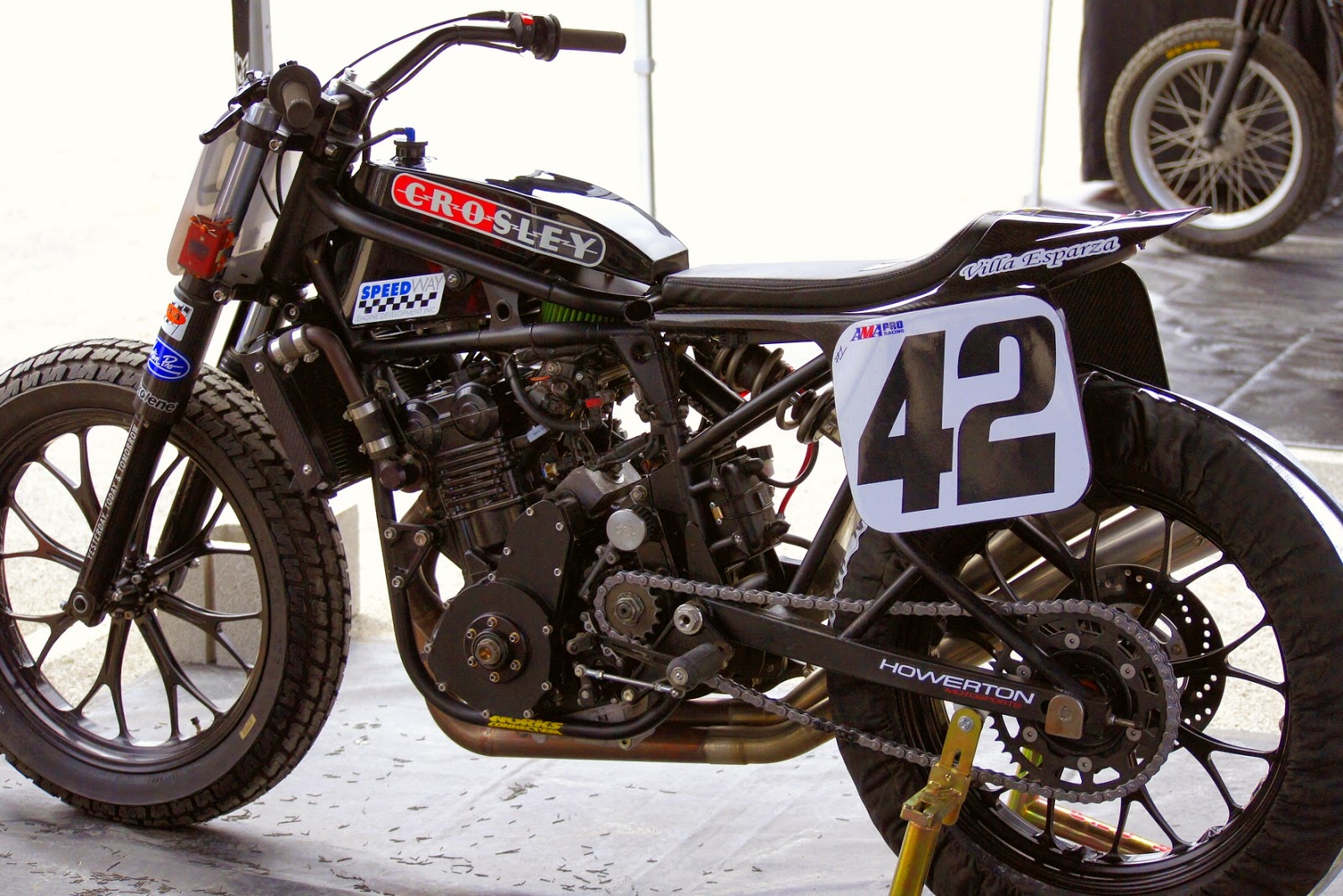 Smith's #42 Villa-Esparza/Crosley Radio/Howerton Products-backed Kawasaki set fast time at Indy and was considered the favorite hands down going into the race what with his overall dominance of mile racing of late, and the way he romped away in last year's main event at Indy. His crew of Jeff Gordon, Dink Glidden and father, Barry Smith, stayed on top of it all evening and Flyin' Bryan still got a 3rd-place finish in the Dash-after winning his heat-and worked his way into the 2nd-place spot in the 25-lap National main to finish just over 2.4 seconds behind winner Coolbeth. 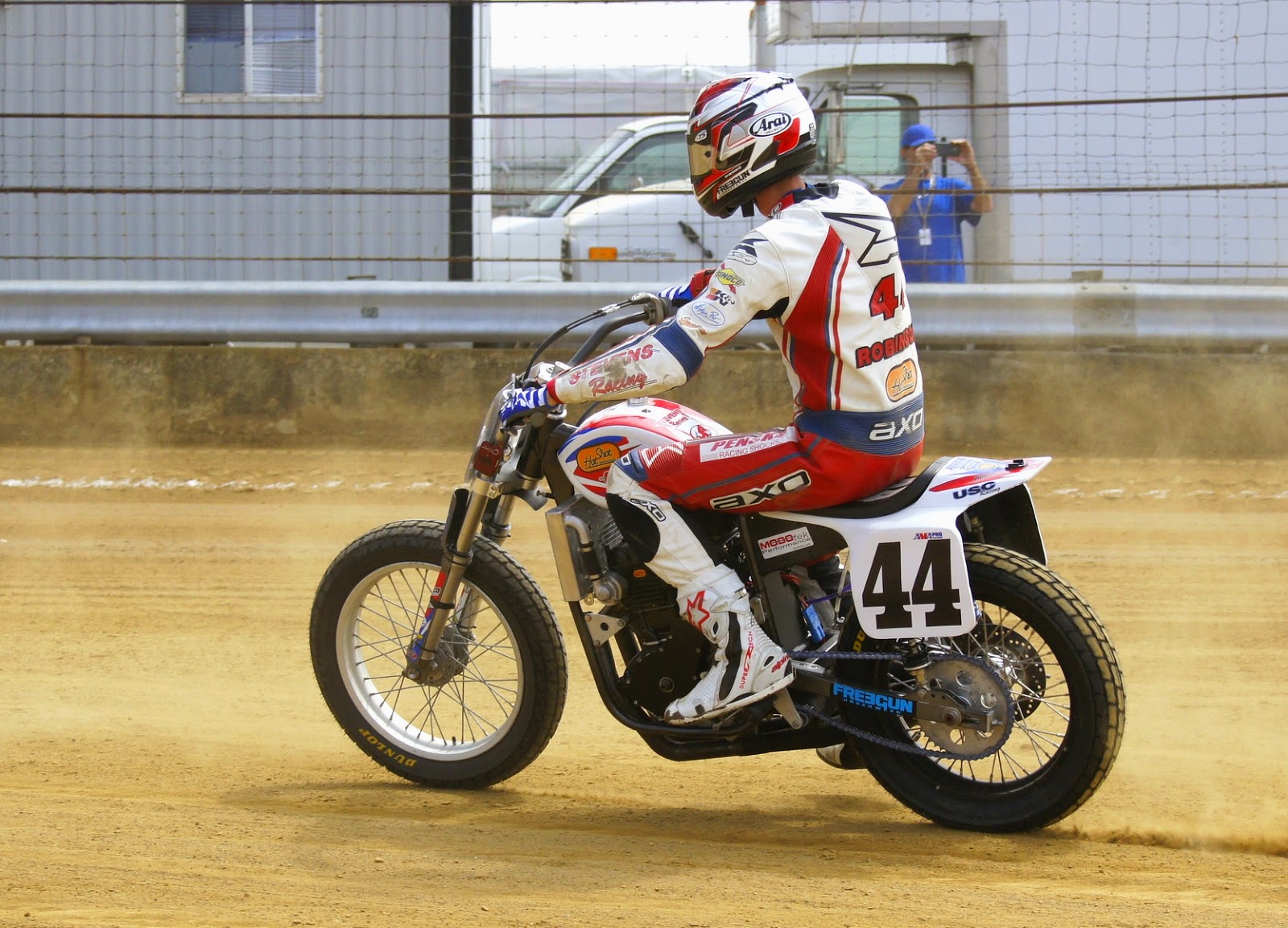 For a track that has treated him pretty well the last couple of years (after nearly ending his career in 2009), Indy was pretty cruel to Brandon Robinson and the #44 USC Kawasaki/Hart Racing/Stevens Racing-sponsored Kawasaki this year. Qualifying 17th out of the 38 riders who took a timed lap, BRob44 was able to keep within just over 1.6 seconds of fast heat 2 winner Coolbeth to make the Dash. But a 6th-place in the Dash and a blown motor in the main left him with a 17th-place finish in the main, and dropping him to 7th-place in the championship standings. Never fear, this hard-charging and hard working young man will be back, and with a bang not like what his motor experienced last Friday night. 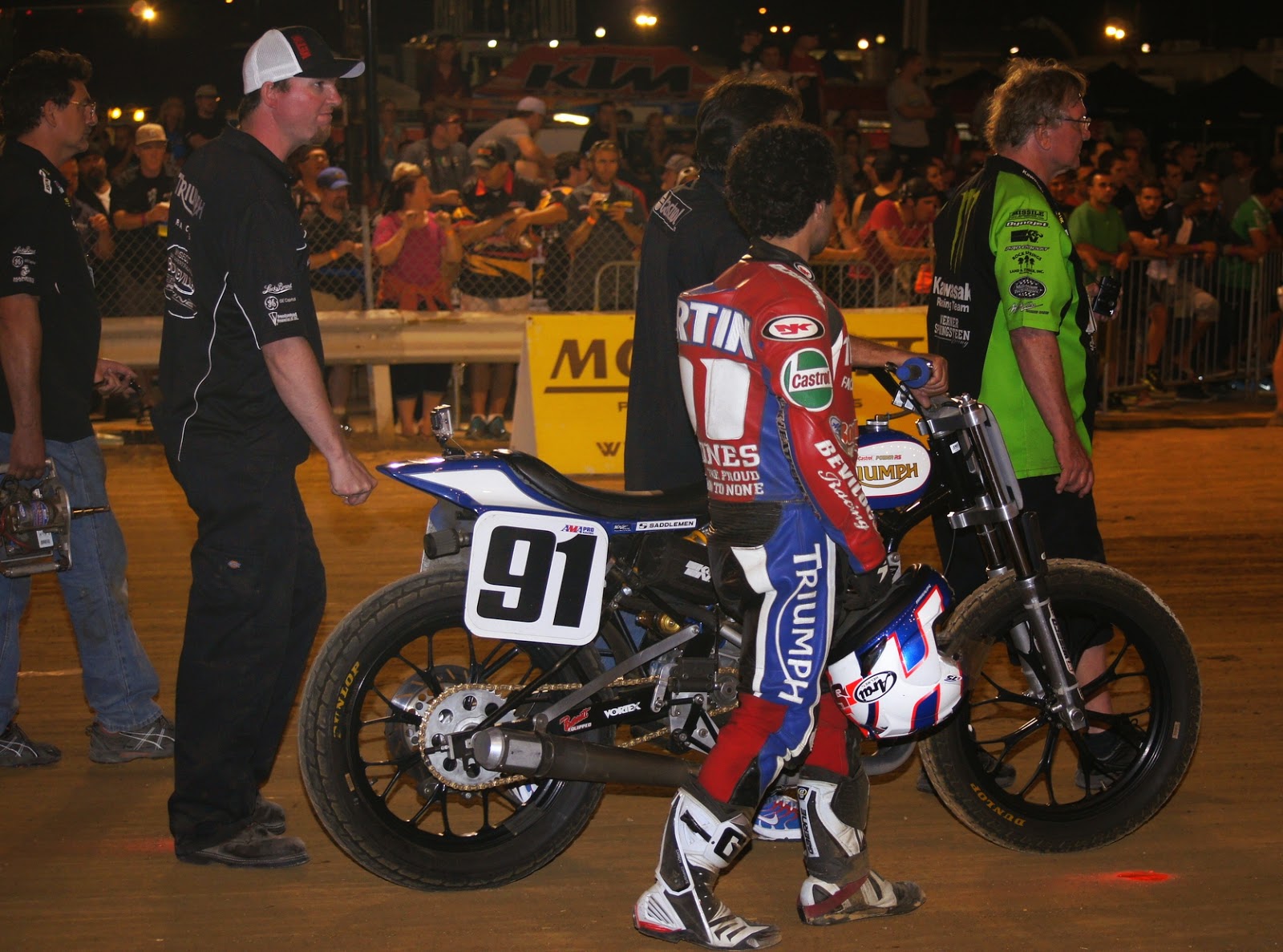 Mikey Martin on the #91 Bonneville Performance/Factory Triumph Racing/Castrol Racing-sponsored Triumph Bonneville was the only Triumph to make the main at Indy, and had his best result of the season on the big tracks with a 12th-place finish. 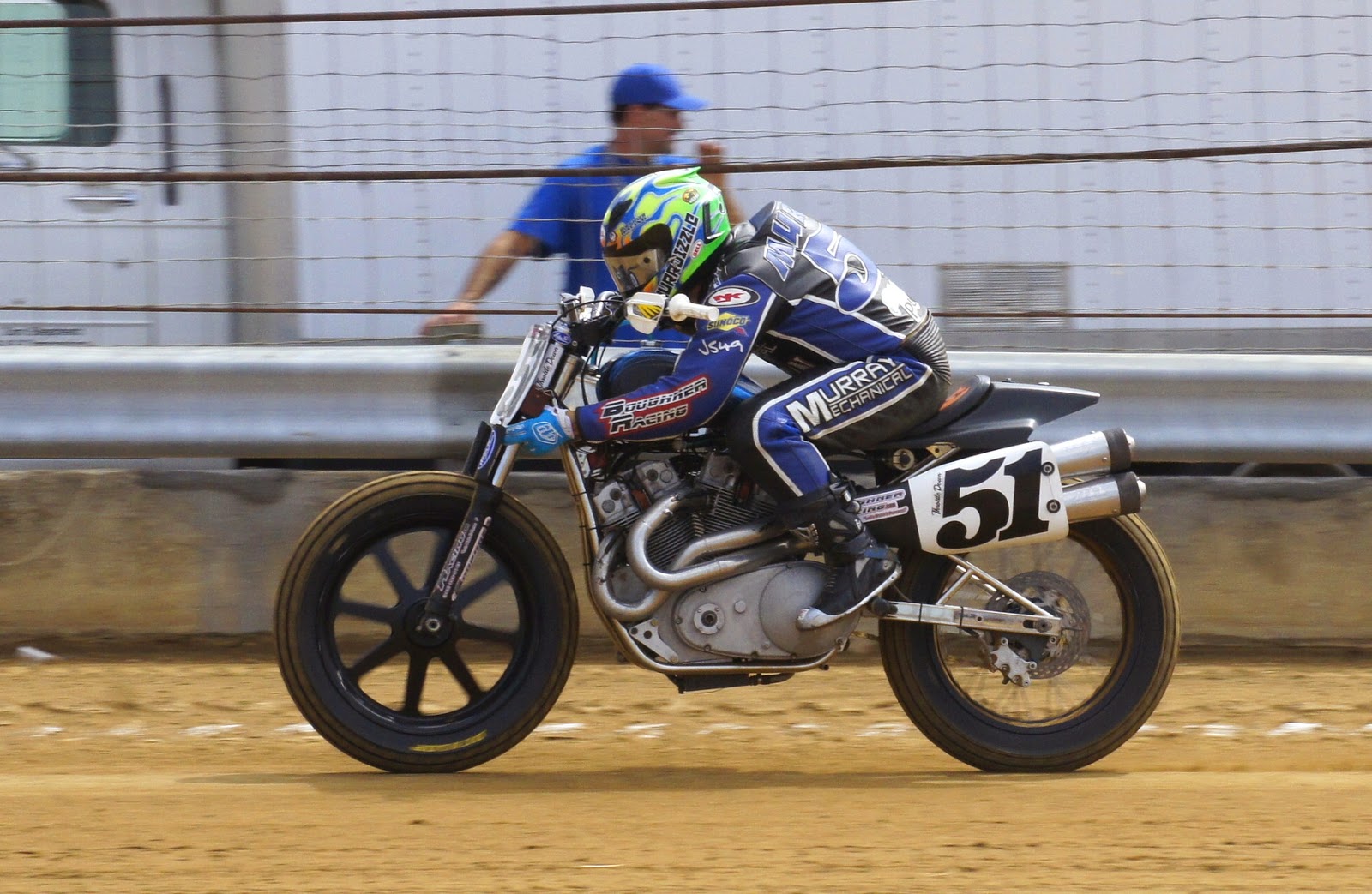 Steve Murray was able to put his #51 Murray Mechanical/American Harley-Davidson/Stauffer Motors-backed XR750 into the main at Indy after a 3rd-place finish in semi race 2 behind Rob Pearson and Jake Shoemaker. The perennial funny man of AMA Pro Flat Track had a short night, unfortunately, after a broken cam put him out just 11 laps in and an 18th-place finish to show for his hard work. 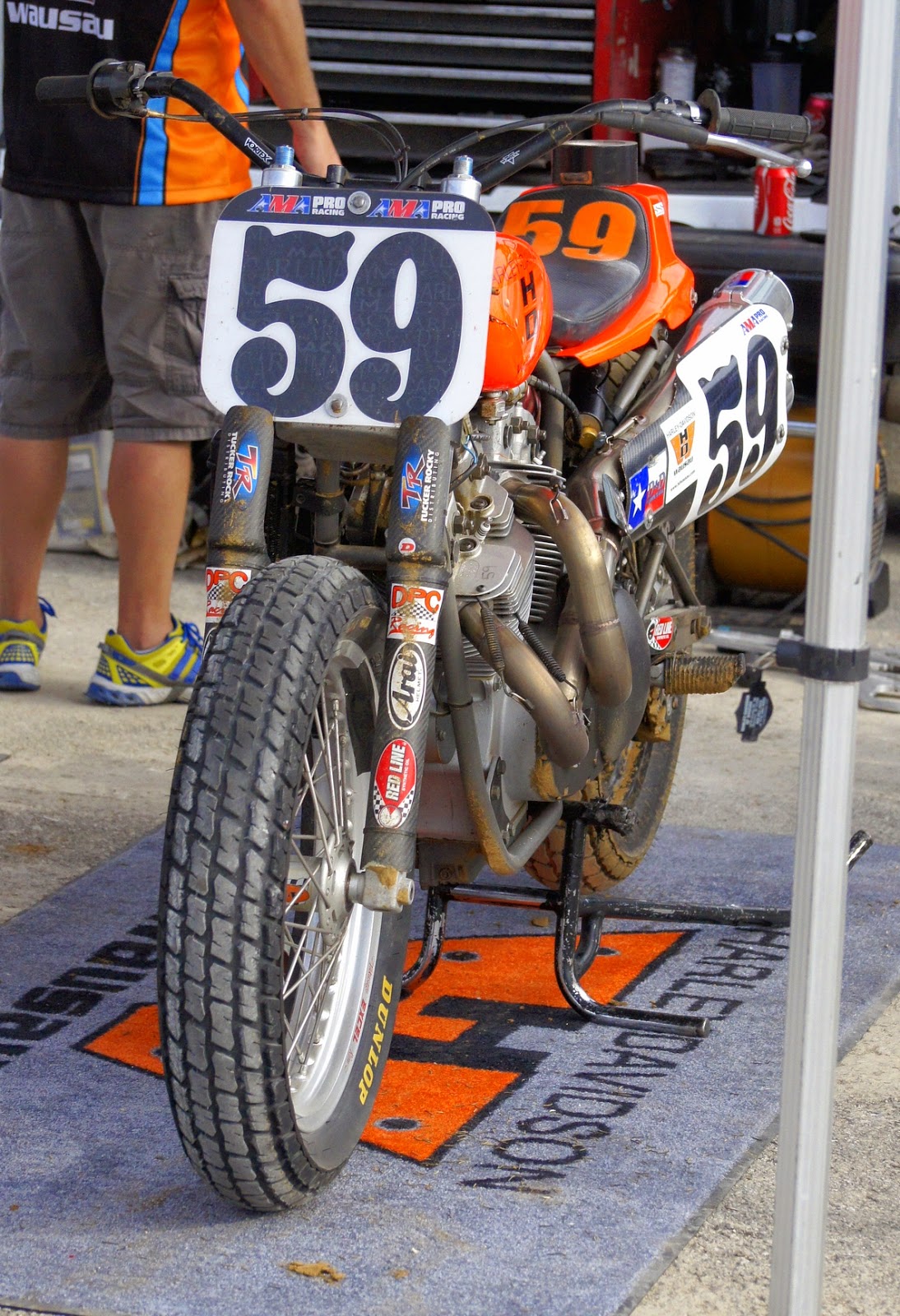 For the first time in recent memory, Willie McCoy missed a mile main event on his #59 H-D of Wausau/Tucker Rocky/Independence H-D-sponsored XR750 after qualifying 20th on the day. A 5th-place in heat 2 and .207 seconds out of the final transfer in semi 1 relegated him to the truck before the main headed to the start line. Never fear, the 2-time Springfield Mile winner will be back to wow us again at Springfield in just over two weeks. 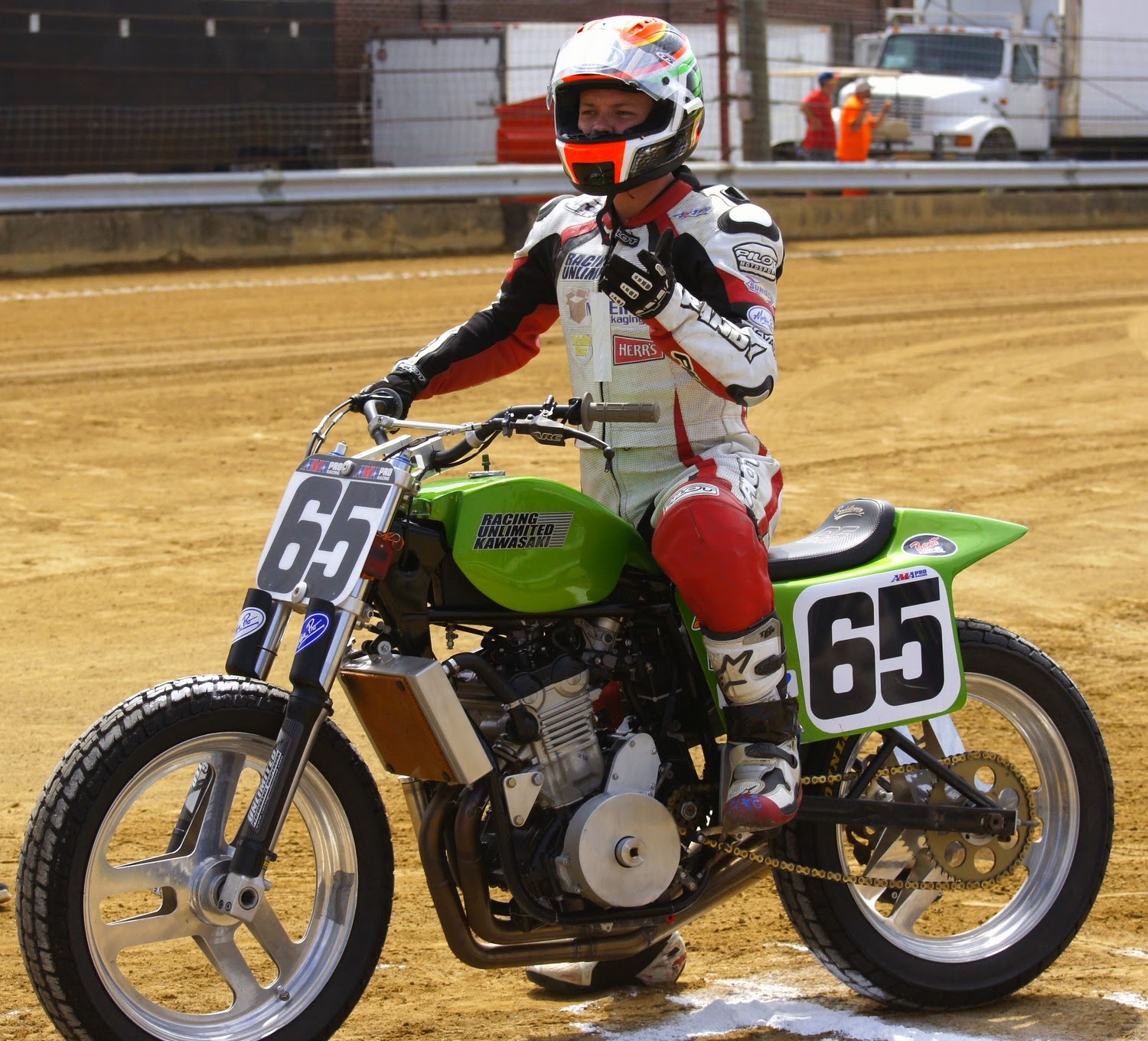 Cory Texter his having his best ever year in the AMA Pro Flat Track Grand National Championship. Qualifying in the 13th-place spot for the program, Texter took the long road to get to the National after a 6th-place finish in heat 1, but fought tooth and nail in semi 1 along with winner Nichole Mees for the entire 8-lap race, coming up just over .7 seconds shy on the #65 Racing Unlimited/McElroy Packing/Invisible Glass-sponsored Kawasaki. His 11th-place finish at Indy was his second best finish of the season (Sacramento Mile 10th-place being his best) and his battle throughout the evening for the top-10 with Rob Pearson and Mikey Martin was well fought throughout the 25-lap main. 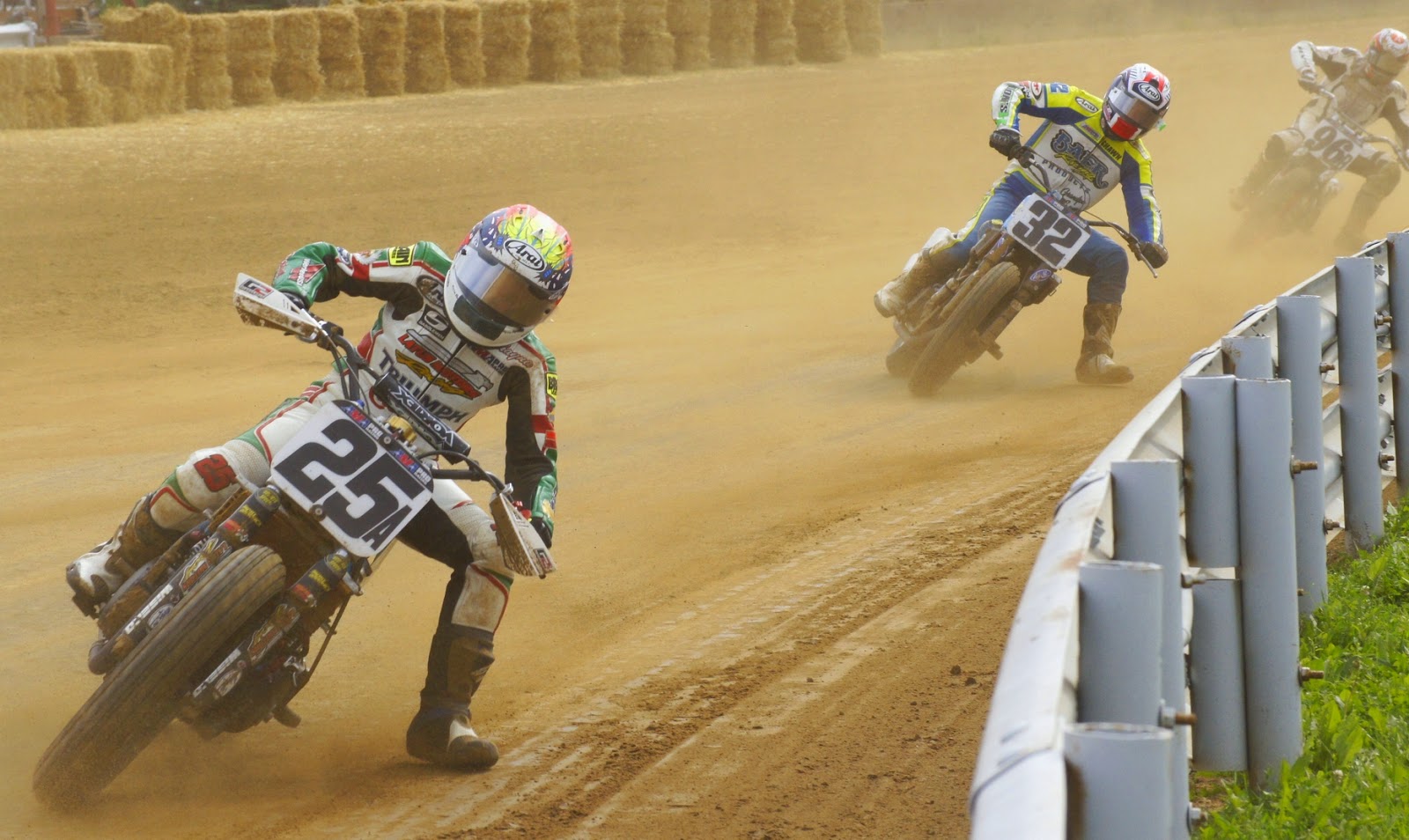 Last year's AMA Pro Pro Singles Indy main winner, Shayna Texter, had a rough go of it at Indy and missed the field on the #25A Latus Motors/Triumph/Castrol Oil-backed Triumph Bonneville. After qualifying 25th, a 7th-place finish in heat 1 and a DNF in semi 2 left her out of the National main. Here she leads Shawn Baer on the #32 Baer Racing Products/KB 5/Kam's Performance-sponsored KTM LC8 950 and Cody Johncox on the #96B Dick Ford/Sunnyside/Brush-Eaken Racing-backed XR750 during the final round of qualifying. Neither Baer nor Johncox made the main, either. 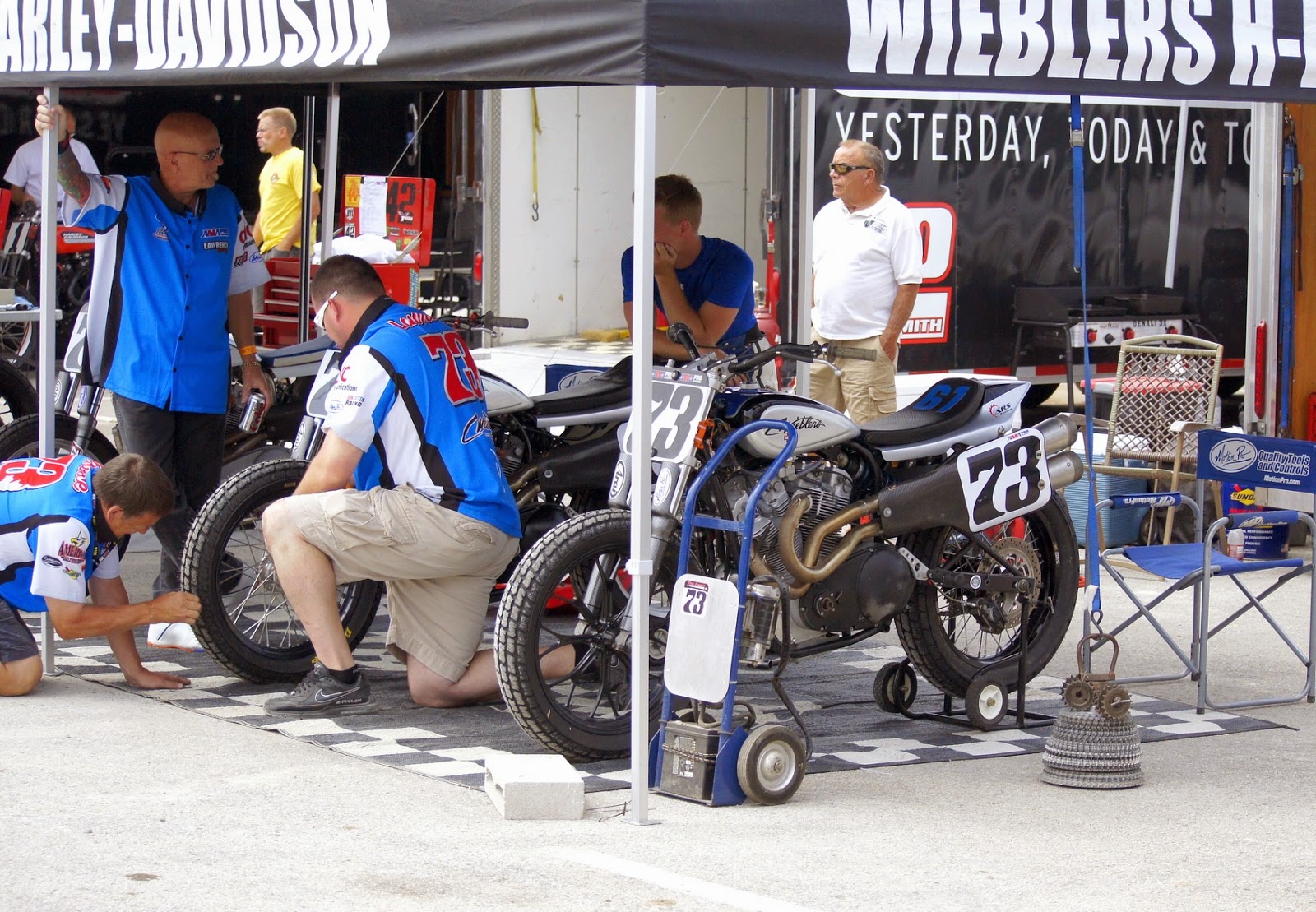 Canada's Doug Lawrence took his #73 Lawrence Racing/Wiebler's Harley-Davidson/Jon Castin Racing-sponsored XR750 to a 13th-place finish after a direct transfer to the main with a 4th-place finish in heat race 3. 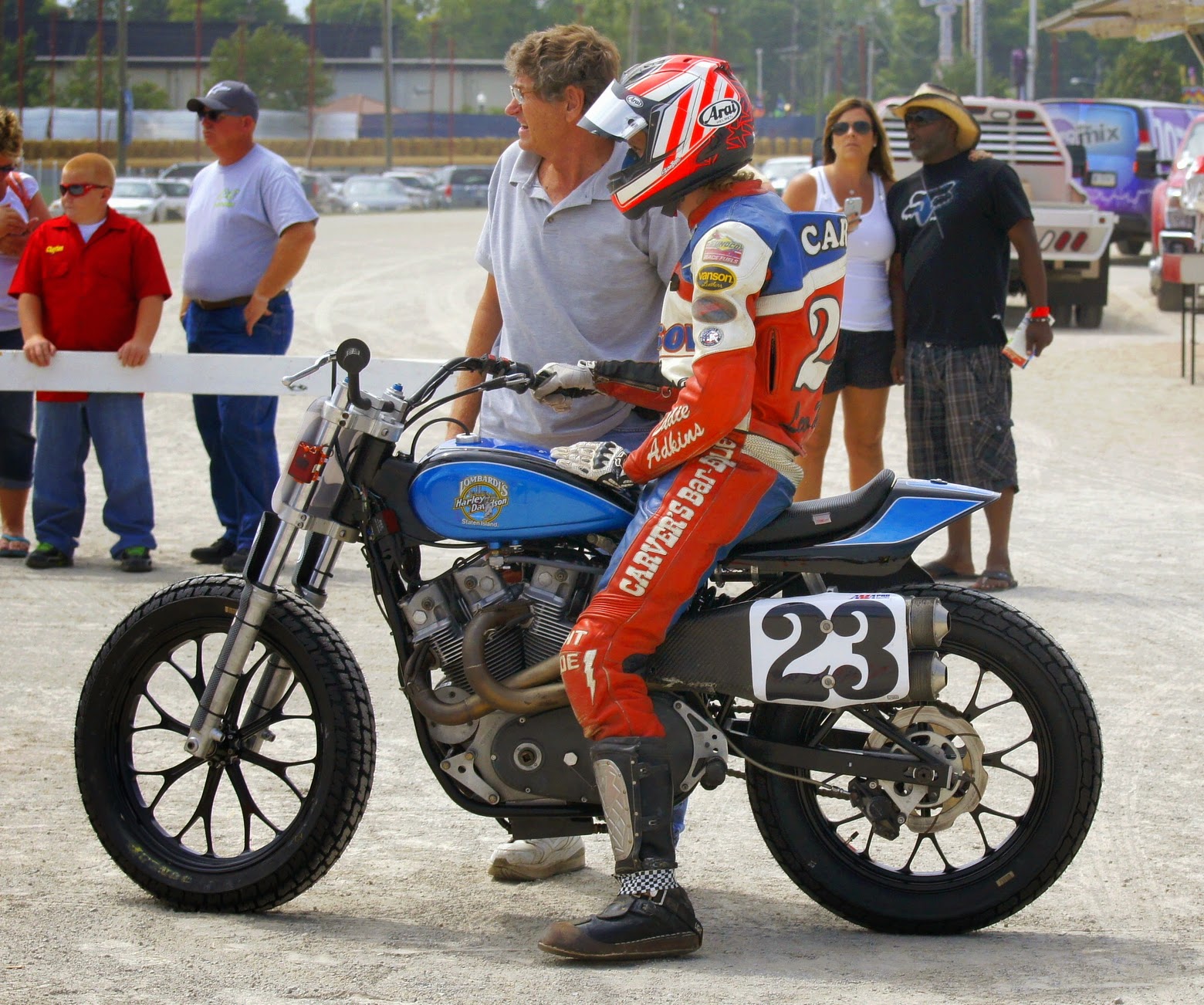 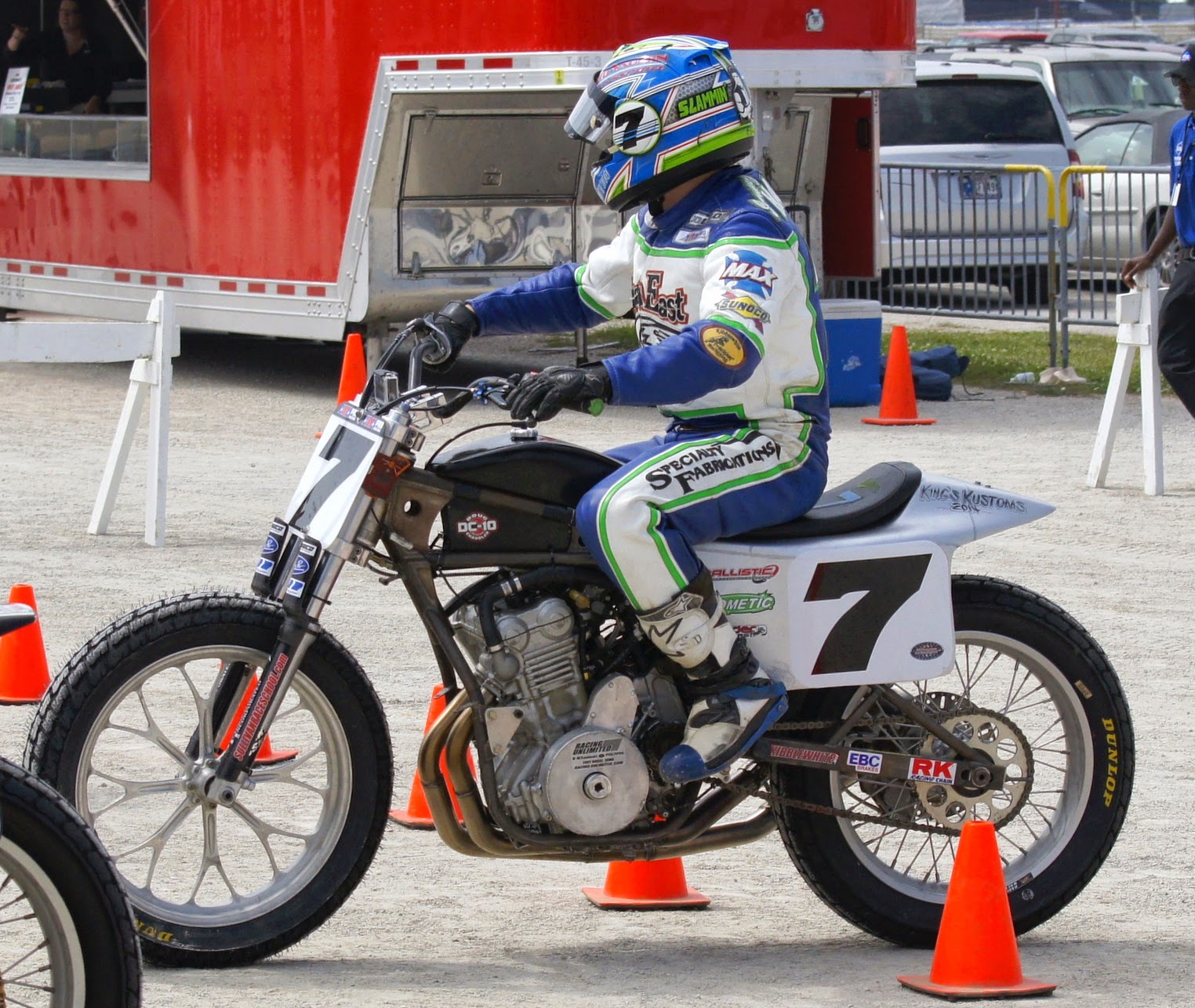 Sammy Halbert first tried out one of Bill Werner's Kawasakis during practice at Indy two years ago, but without enough time to get things sorted out, went back to his tried and true XR750, which he took to the win in 2012. This year, The Slammer showed up with his freshly-built #7 South East H-D/White's H-D/DC10-sponsored Kawasaki and took a 5th-place qualifying effort to start the day's events off with. With a 4th-place finish and a direct transfer to the main in heat race 2, Sammy went on to finish in the 15th-place spot in the National, never in contention at the front, but he held onto the 5th-place spot into the championship heading to the Peoria TT this weekend. 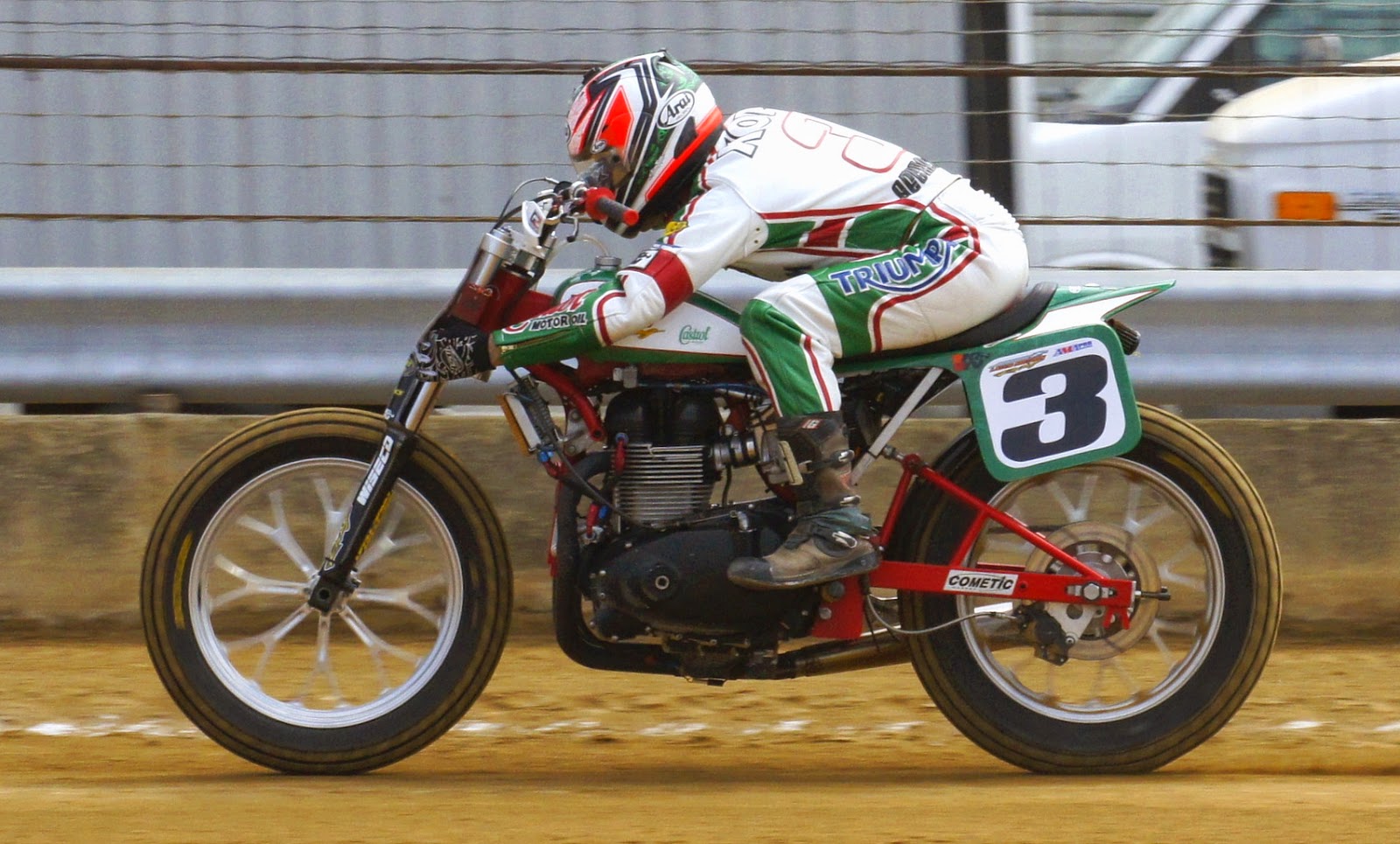 2000 AMA Grand National Champion Joe Kopp is the senior man on the Latus Motors squad this season, trying to help the team and new rider Shayna Texter come to grips with the factory Triumph-backed efforts. After a 5th-place overall practice effort, Kopp qualified the #3 Latus MotorsTriumph/Triumph/Castrol-sponsored Triumph Bonneville machine in the 22nd overall spot, and was running in the top-3 in heat race 1 before an electrical problem sidelined him with just two laps to go. In semi race 1, the same electrical malady sidelined him just three laps in after running near the front and what could or would have been a shot at the main.

In the AMA Pro Flat Track Pro Singles class, this year's class has been deep with talent, but has been overshadowed by Kyle Johnson, Jarod Vanderkooi and David Fisher. Vanderkooi came out on top of a big battle at the front of last Friday's Pro Singles main to take the win, with Johnson in a dead heat at the line. The margin of victory was .000 seconds and it took AMA Pro Flat Track officials until the cool off lap was complete to determine for sure that Ohio-resident Vanderkooi had nipped series points leader and wins leader Johnson by a wheel spoke. Unfortunately, TJ Burnett Farms' Fisher had a rough get off coming out of turn four on the final lap that put him into the airfence and on the ground, and will see him out of action for the next couple of races.


Again, a big thanks to AMA Pro Flat Track for another stellar event, and to the great folks at Family Events for promoting another big bang effort at the Indiana State Fairgrounds. A grand time was had by all and Stu's Shots salutes you and all of the riders, teams and sponsors for making The Rolling Thunder Show the best racing on two wheels in the world that it is!
 AMA Pro Flat Track Newsletter - August 3, 2014