Round 11 of the 2014 AMA Pro Flat Track Grand National Championship Season Heads to the Legendary Indy Mile on Friday, August 8 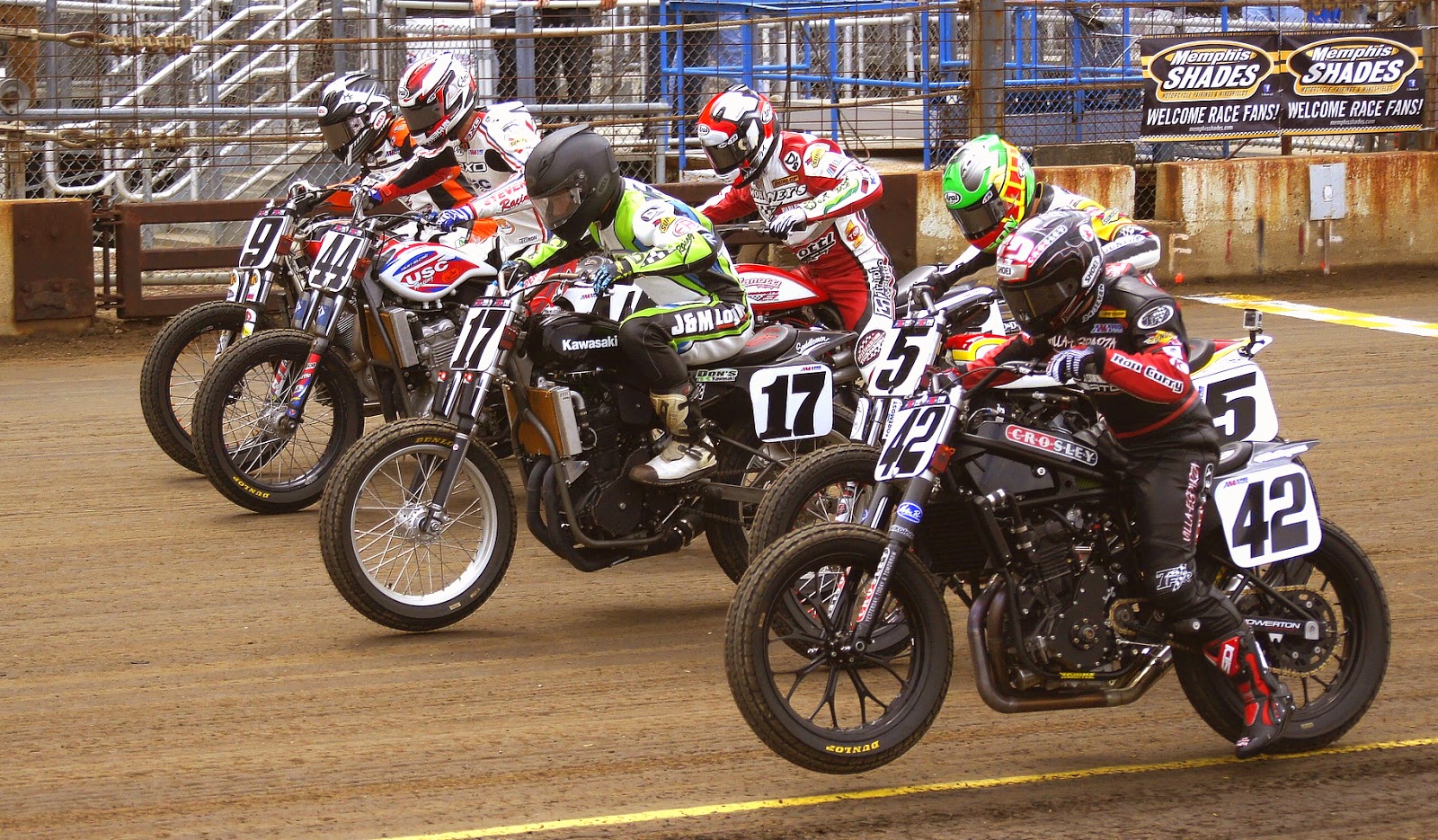 One of the biggest two-wheeled racing weekends of the year is nearly upon us, with Indianapolis playing host to a multitude of racing activity, but for fans of flat track racing, the place to be for tomorrow will be the Indiana State Fairgrounds as Family Events Promotions brings the action to the mile oval during the Indiana State Fair as it hosts round 11 of the 2014 AMA Pro Flat Track Grand National Championship at the legendary Indy Mile.

One of the most popular events on the series' calendar, Indy brings all of the big boys and girls out of hibernation to do battle in one of the premier events of the year, and Family Events, who has been hosting and promoting the race since it's return alongside the Red Bull Indianapolis MotoGP weekend down the street at the Indianapolis Motor Speedway in 2008, is again ready to do another great job of bringing the best of The Rolling Thunder Show to the fans of AMA Pro Flat Track.

In what has been the biggest race on the series schedule other than the Springfield Mile races held over the Memorial Day and Labor Day weekends, Indy plays host to the largest turnout of riders, teams, sponsors and fans. Last year's event saw Bryan Smith take the win in front of the home crowd for his owner, Rick Howerton, in what was another great show under the lights and backdrop of the huge Indiana State Fair layout.

This year promises to be no exception, and with Smith looking to defend his title and riders such as 2012 Indy Mile winner Sammy Halbert, Jake Johnson, current points leader Jared Mees, Henry Wiles, Brandon Robinson, 2009 Indy Mile winner Kenny Coolbeth and a host of others looking and hoping to be able to stop his current win streak at Indy at just one. And as just a reminder, Smith also got Kawasaki it's first-ever win on a mile oval at the Indy Mile in August 2010 while riding for the man who is considered the pioneer of the Kawasaki movement, and also the winningest tuner on the AMA Grand National Championship trail, Mr. Bill Werner.

Time will tell whether the potent Kawasaki, the venerable Harley-Davidson XR750, the big Ducati, or one of the Triumphs or KTMs will be able to unseat the rocket Kawi from the top of the podium, but one thing is for certain, the place to be for any race fan tomorrow afternoon and evening is the Indiana State Fairgrounds as the best two-wheeled racing in the world takes it's place in front of a huge European contingent and Indiana State Fair turnout under the lights at the big oval on Indy's north central part of town.

In the shot above, the contestants in the Dash for Cash event at round 3 of the 2014 AMA Pro Flat Track Grand National Championship roar and wheelie off the line in what was a rousing 4-lap race at the Springfield Mile I race on May 25. And what's even better is these six men make up six of the top-7 in the overall fight for the 2014 AMA Grand National Championship that including tomorrow's Indy Mile race will do battle to the end in the last six races of the season.

There's sure to be a big throng of riders going for it tomorrow night, but if I was a betting man, I'd lay my money on one of the six riders above to be on the top of the box after the checkers fly and the dust settles, and another two of them standing alongside to spray the winner with the bubbly.

This is one you don't want to miss, as I guarantee it will be big, fast and furious right from the start all the way to the checkers flying after the 25-lap National main wraps up!

Here's a link to the full schedule of action tomorrow at the Indy Mile, with the first practice session set to roll off at 3:00 PM EDT to get the juices flowing for all in attendance. 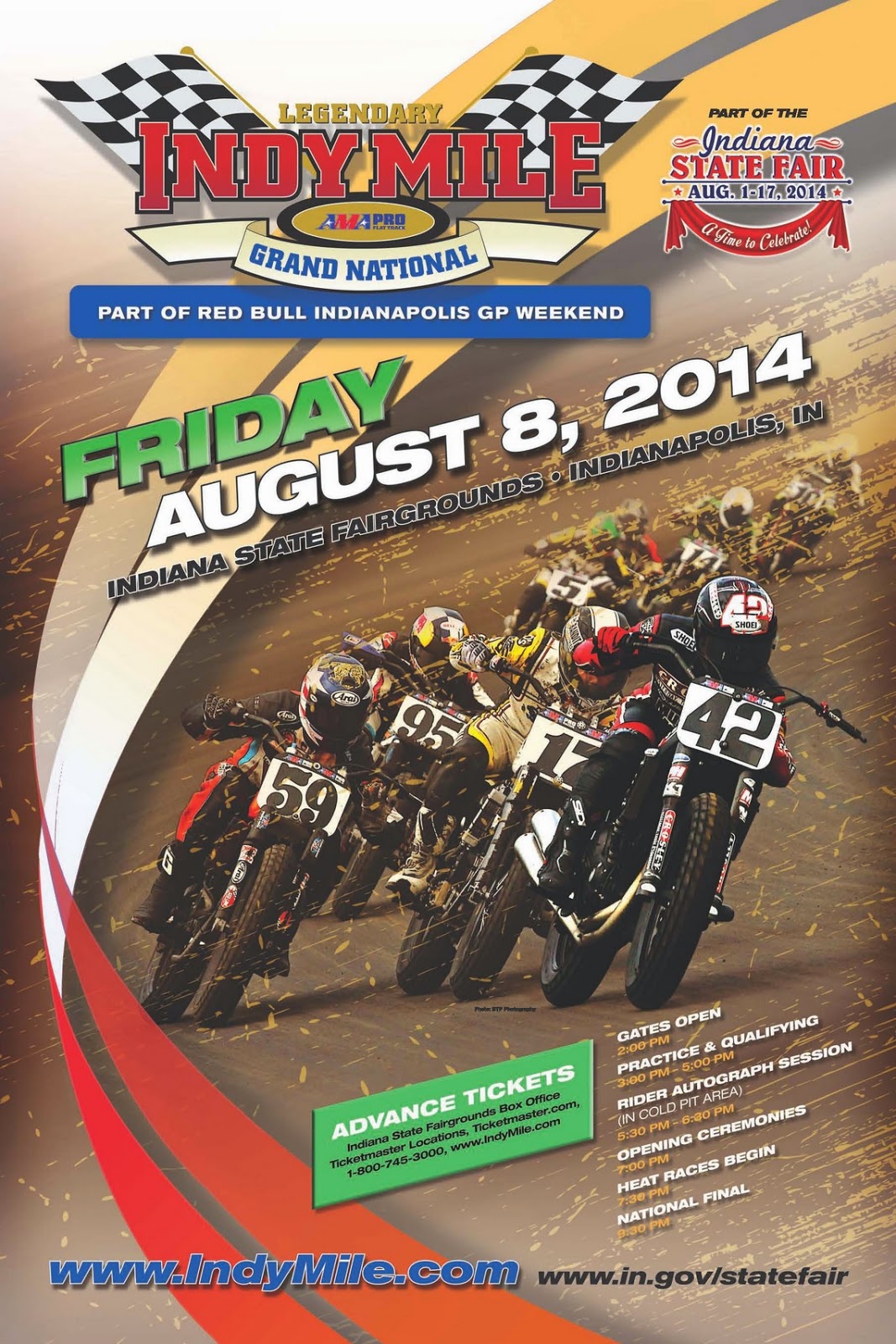