Willie G. Davidson to be honored as an AMA Motorcycle Hall of Fame Legend at 2014 induction ceremony

The induction ceremony is part of the AMA National Convention being held in conjunction with the American International Motorcycle Expo (AIMExpo) Oct. 16-19. Tickets for the induction ceremony range from $25 to $150 and are available online at www.motorcyclemuseum.org/Events/HallofFame2014.aspx.

"Few motorcycle designers have contributed more to the modern motorcycle landscape than Willie G. Davidson," said Ken Ford, a member of the Hall of Fame executive committee and treasurer of the AMA board of directors. "Willie G.'s name is synonymous with style, freedom and the American-made motorcycle. We're very excited to recognize him as an AMA Motorcycle Hall of Fame Legend at this year's induction ceremony."

AMA Motorcycle Hall of Fame Legends are existing members of the Hall of Fame whose lifetime accomplishments are showcased as part of the annual induction ceremony of new Hall of Famers.

"I feel the same humility today receiving Legend status as I did 15 years ago when I was inducted into the AMA Motorcycle Hall of Fame," said Davidson, who was inducted into the Hall of Fame in 1999. "It's an honor to know that the creativity and emotion that's part of every Harley-Davidson motorcycle has helped fulfill dreams of personal freedom for millions of motorcyclists around the world. By securing this place in history as part of an iconic American brand like Harley-Davidson, I'm living out my dream and those of my family members who founded the company 111 years ago," Davidson said.

Davidson, who graduated from the University of Wisconsin with a degree in graphic arts and then attended the Art Center College of Design in Pasadena, Calif., joined the design department at Harley-Davidson in 1963. 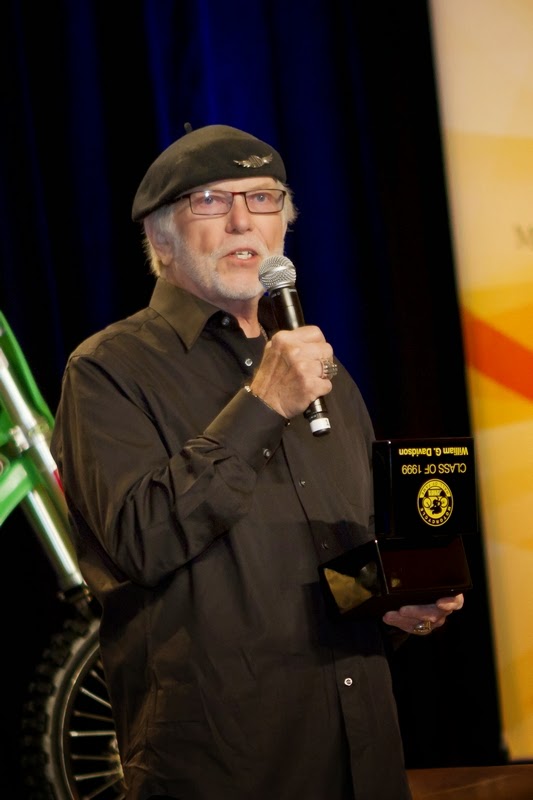 From the outset, Davidson's designs broke convention. Among his earliest projects was the FX Super Glide. The Super Glide was one of Harley-Davidson's factory customs, a production motorcycle with styling cues that reflected the custom motorcycles being built in shops across the country at the time. Today, the Super Glide is considered to be a milestone in the history of Harley-Davidson. The original FX led to many variations that would produce some of the company's best-selling machines. In addition to his work at the design table, Davidson was a savvy businessman. He was one of the 13 company executives who raised the funds to buy Harley-Davidson back from conglomerate AMF in the 1980s. As such, he was crucial in laying the foundation for Harley-Davidson to become one of the most successful, profitable and fastest-growing corporations in the United States over the next three decades.

Join the conversation! Follow along with us at #AMAHoF to get the latest updates on the 2014 AMA Motorcycle Hall of Fame Induction Ceremony. Don't forget to connect with us too! Facebook.com/AMAHallofFame and @ama_riding on Twitter and Instagram.