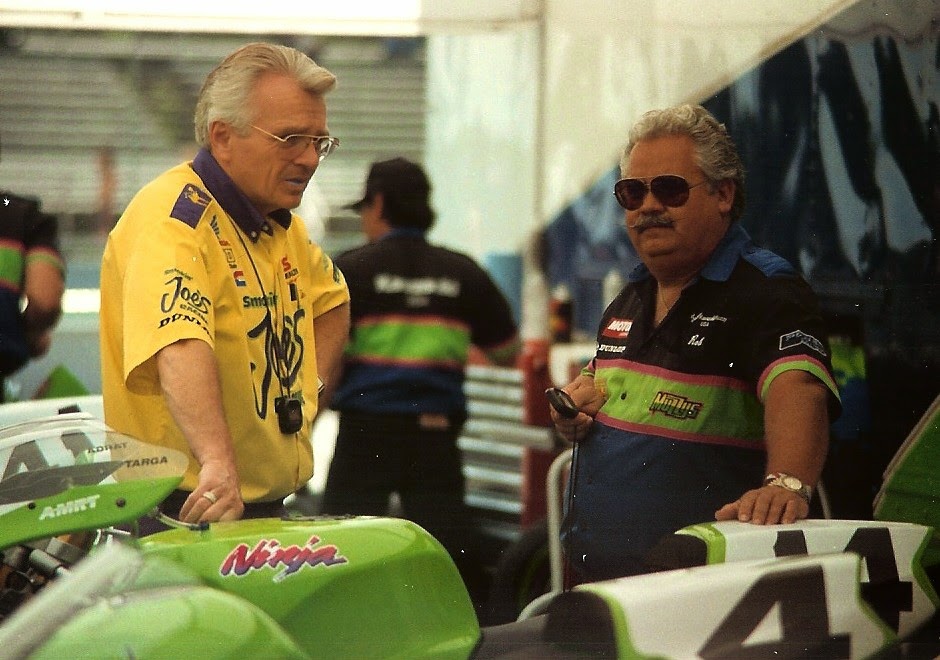 In the shot above, Muzzy (R), can be seen talking with another AMA Motorcycle Hall of Fame member, Gary Mathers, the former head of the Smokin' Joe's Honda team in the AMA Superbike Championship throughout the mid-90's, during a break in the action at Road America in June '94 under the awning of the Team Muzzy Kawasaki team set-up of his riders Steve Crevier #14 (Superbike) and #4 (600 Supersport) and 'Tiger' Sohwa #41 (Superbike) during the Honda Super Cycle Weekend at Elkhart Lake, WI.

Muzzy will be officially inducted into the AMA Motorcycle HOF on October 17 in Orlando, FL.

Thanks to the AMA Motorcycle Hall of Fame for the official press release below which covers this great man's election today into the HOF, something most anyone that has followed AMA Pro Road Racing for anytime, knew was bound to happen sooner or later. Congrats to Rob for this great achievement and accomplishment, and thanks for all the great memories throughout the years!

PICKERINGTON, Ohio -- July 8, 2014 -- Rob Muzzy, a top tuner, engine builder and race team owner has been elected to the AMA Motorcycle Hall of Fame Class of 2014.

Muzzy, who was elected to the Road Racing category, will be inducted at the 2014 AMA Motorcycle Hall of Fame Induction Ceremony Oct. 17, in Orlando, Fla. The induction ceremony is part of the AMA National Convention being held in conjunction with the American International Motorcycle Expo (AIMExpo) Oct. 16-19. Tickets for the convention and the induction ceremony go on sale soon. Check back at www.motorcyclemuseum.org for updates.

"Rob Muzzy's successes stretch across seven decades, from his 1950s drag racing ventures to his current performance-products business and team ownership," said Ken Ford, a member of the Hall of Fame executive committee and treasurer of the AMA board of directors. "Throughout his career, Rob's determination, skills and strategies have proved effective, placing him and his race teams at the top of the motorcycle racing community."

Muzzy was elated to learn of his election.

"I was really glad to get the call," he said. "I know I was nominated three or for years ago, but didn't get in. So I was pretty glad that I got the votes this time around."

The final 2014 inductee will be announced later this week.

Muzzy got started in drag racing during the 1950s and raced dirt track as a novice in Southern California. He always built and tuned his own race engines.  "When it was time to move up to the next level -- by then I was married and had a kid -- I just decided that I wasn't that serious about it," Muzzy said. "I always had medium success as a rider. But I always had the quickest bike. So, the other guys were asking me to build engines for them. So moving from racing to tuning is just something that happened."

Muzzy's first shot at a performance business, in the 1970s, proved unsuccessful, largely due to an economic downturn at the time. So he responded to a Kawasaki ad for a motorcycle mechanic, landed the job and never looked back.  "That was the beginning of my real success, October 1980," Muzzy said.

Winning with Muzzy as crew chief or tuner were Hall of Famers Eddie Lawson, Ricky Graham, Scott Russell and Doug Chandler as well as Ron Lechien, Miguel Duhamel, Rickey Gadson and numerous others.

In January of 1988, at the strong urging of his wife, Muzzy re-opened his own business, producing engines and exhaust systems for racers.  "I just wanted an easy, 40-hour-a-week job someplace, but my wife convinced me that I should take advantage of my reputation and skills," he said. Toward the end of 1988, Muzzy learned that Kawasaki planned to release a new 750cc bike.  "I got in touch with them and said, 'Gee, you ought to race that thing,'" he said. 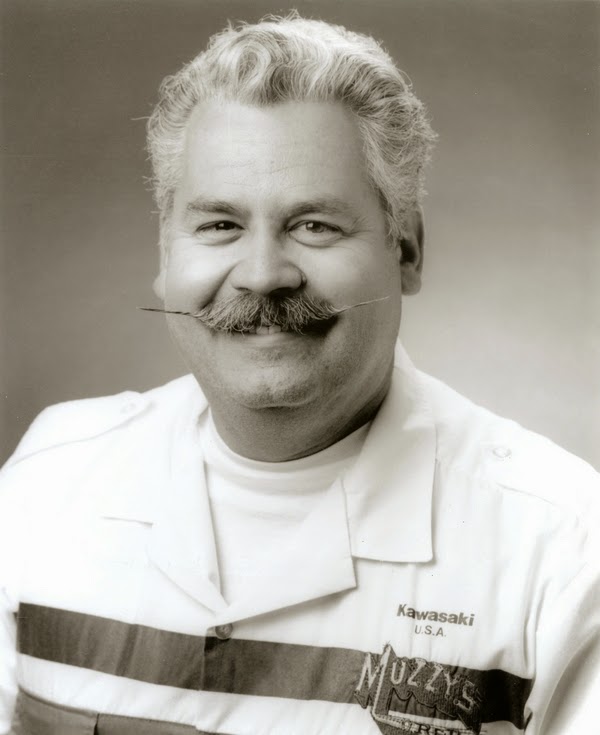 
Kawasaki agreed and provided Muzzy with "a very minimal budget" to build a race bike and hire a rider. He recruited Russell and Chandler, who subsequently finished first and second in the 1990 AMA 750cc Supersport Championship. Chandler also won the AMA Superbike Championship that year.  Kawasaki then asked Muzzy to run its FIM World Superbike team. He accepted, and the team won two world championships.  "Those were probably my most successful days," he said of managing U.S. and world racing teams while running a full-time business. "But that almost killed me."

Muzzy said the 1993 season was his most memorable, working with teams that won the AMA Supersport Championship and the FIM World Superbike Championship and notching Kawasaki's first victory in the Suzuki 8 hours Endurance Road Race.  "To me, it doesn't seem like anything I do is particularly outstanding," Muzzy said. "I have a good eye for talent, when I can pick them, and I have been fortunate to work with a lot of really good talent, whether I picked them or not. We always have a strong team atmosphere, with everyone working toward the same goal."


Founded in 1990 by the American Motorcycle Heritage Foundation, the goal of the AMA Motorcycle Hall of Fame Museum is to tell the stories and preserve the history of motorcycling. Located on the campus of the American Motorcyclist Association in Pickerington, Ohio, the Museum's three major exhibition halls feature the machines and memorabilia of those who have contributed notably to the sport. The AMA Motorcycle Hall of Fame Museum recognizes individuals who have made significant contributions to motorcycling, including those known for their contributions to road riding, off-road riding and all categories of racing, as well as those who have excelled in business, history, design and engineering.
More information can be found at www.motorcyclemuseum.org.