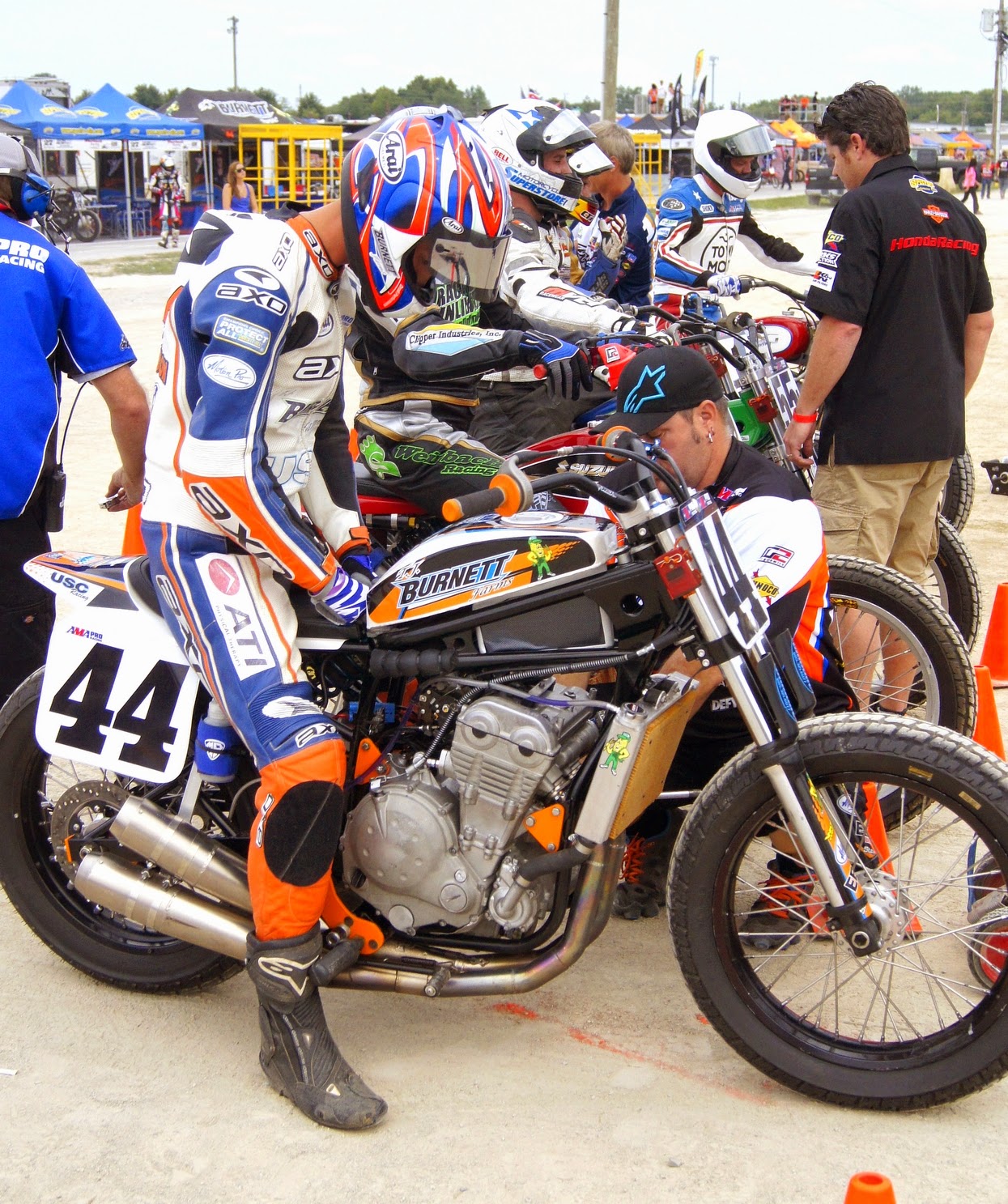 Round 6 of the 2014 AMA Pro Flat Track Grand National Championship season is in the bag, and one of the toughest tracks on the schedule for Brandon Robinson and the #44 USC Kawasaki/USC Racing team showed even more promise for the boys based out of Southern Illinois.

Robinson, the 2008 AMA Pro Flat Track Basic Twins Champion, fell off in a big way to card only a 17th-place finish during his stint at Hagerstown in 2013, but turn it around this fine young man did last week to bring home a solid 4th-place finish that saw him and the team move into the 5th-place spot in the overall championship with the season not even at the halfway point yet.

In the shot above, Robinson watches as team member Billy Gruwell slings the starter motor into place to ready the #44 TJ Burnett Farms/USC/Hart Racing-backed Kawasaki EX650 for the upcoming first practice session at round 10 of the 2013 AMA Pro Flat Track Grand National Championship at the legendary Indy Mile on August 17, where BRob44 went on to card a 2nd-place finish, one of seven top-5s and one of six podium spots that Robinson took in order to garner a season-ending 3rd-place finish in the overall standings for the 2013 season.

With the way things are going for Robinson and the USC Kawasaki/Hart Racing squad this year, a better finish than what they were able to achieve last year isn't out of the question, although there is still a lot of racing yet to decide who does what for the season. So stay tuned and check out BRob44's race report from Hagerstown below.

With the weekend off, the series gets ready to roll into the Pacific Northwest next Saturday, July 19 for the Grays Harbor Raceway Half-Mile, round 7 of the AMA Pro Flat Track Grand National Championship.

The busy race season is finally upon us and we had a short week to get ready for Hagerstown this past weekend. Hagerstown is kind of my home town race per say as it’s the only national I get to sleep in my own bed the night before.
Anyways typically the weather this time of year out my way in brutally hot and humid, but we lucked out this year and had pretty much a picture perfect day. Not quite sure what it is about this place, but I never seem to have too much luck at this track.
Things started off a little shaky on the night as I could only muster a 12th during timed qualifying.  The team made some changes to the bike and it seemed a lot better right off the bat in the heat and I finished a close 2nd place to eventual main event winner Bryan Smith. 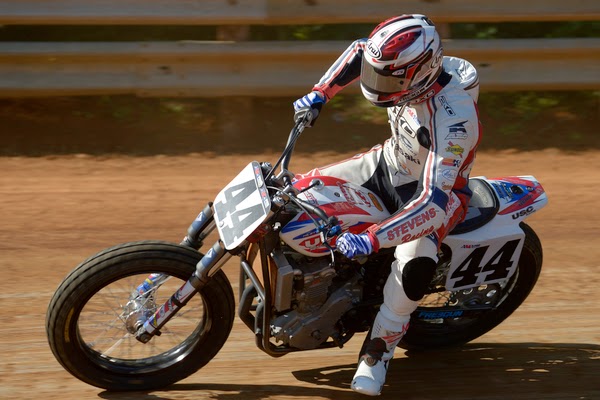 Brandon Robinson on the #44 USC Kawasaki/Hart Racing team's EX650 is shown in action at the Hagerstown Half-Mile round of the AMA Pro Flat Track Grand National Championship season on July 5. Photo courtesy of Brandon Robinson and the USC/Hart team by Dave Hoenig/Flat Trak Fotos.com.


That put us in the Dash and on the front row for the main! We made a few more adjustments for the dash to see if we could find something. I didn’t get the best of start and got pushed wide going into turn three and finished 5th in the dash. I knew the biggest thing I could do for the main was to get a good start, as track position is key at Hagerstown since there really isn’t much passing going on.
Thankfully I was able to get a decent jump and drop in line fast. I was running 4th for the first portion of the main until Kenny Coolbeth broke and for a moment I kind of thought I was going to have something for the leaders. As the race went on the track was drying out and my line just slowly went away from me. Eventually I fell back to 4th place where I ultimately finished.
All in all I was happy with this effort as it was my best finish at this track and it was another consistent finish that keeps us solidly in this championship hunt!
Next up is Elma, WA in two weeks.