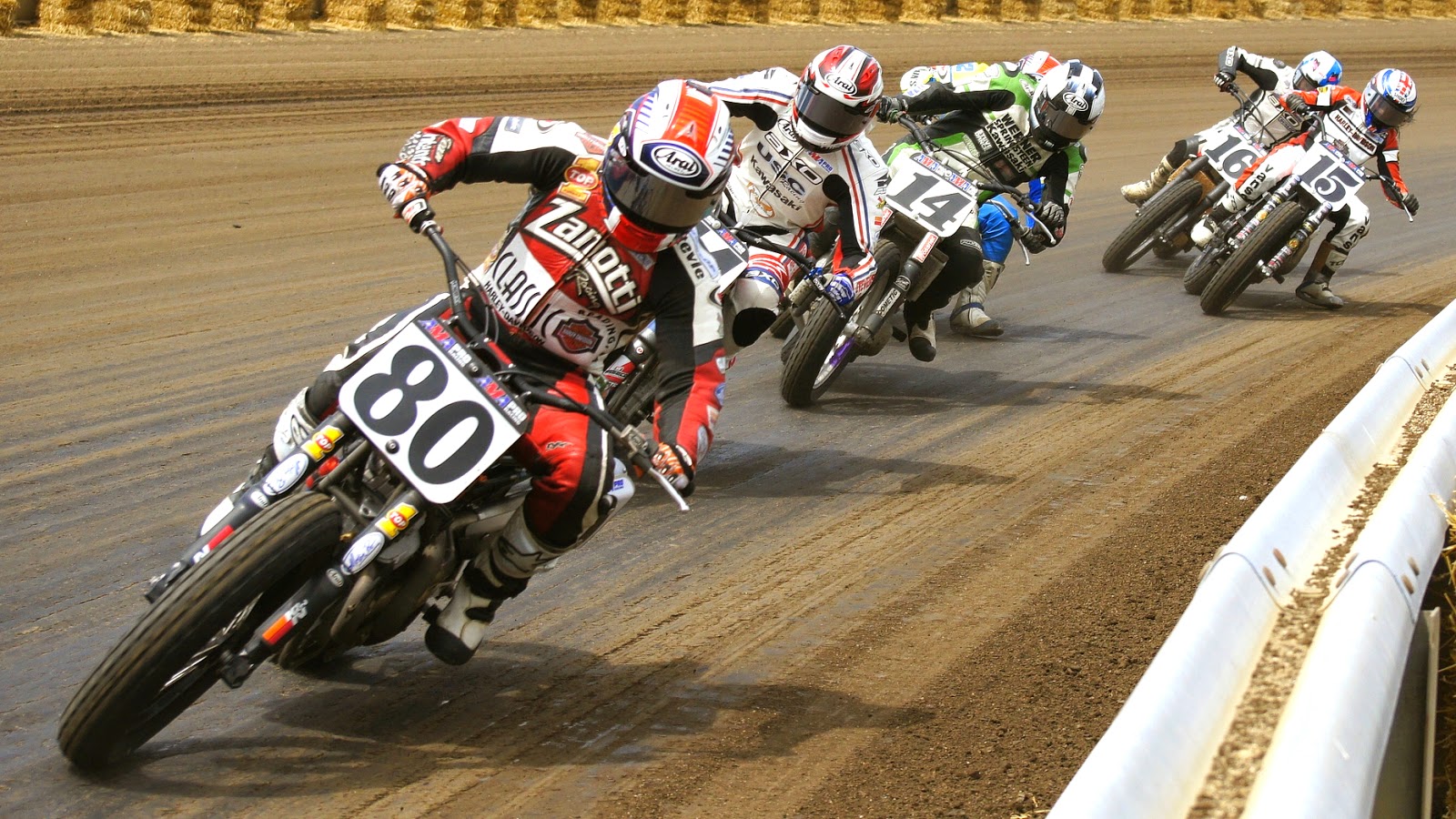 What was once an annual stop on The Rolling Thunder Show's schedule, the Black Hills Half-Mile round of the AMA Pro Flat Track Grand National Championship will again be returning to the schedule this coming August 5 in round 10 of the 2014 season as part of the Sturgis Rally in Rapid City, SD, one of, if not the largest-attended motorcycle-related festivals on the North American continent. The event will be promoted by Black Hills Harley-Davidson and it's owner, Terry Rymer, who harkens back to the day when Ricky Graham, Kevin Atherton, Rich King and others took their frustrations out on the track in route to winning during the weeklong festivities in the Badlands-area located track.

In the shot above, round 3 of the AMA Pro Flat Track Grand National Championship saw the first Twins Series event of the 16-race season get underway at the Springfield Mile I on May 25, and in heat race #2 the action as always was hot and heavy for the four direct transfers available to the 25-lap National main.

Leading this pack behind eventual heat winner Jake Johnson are Stevie Bonsey on the #80 Zanotti Racing/Classic H-D/Top 1 Oil-sponsored H-D XR750, with Brandon Robinson on the #44 USC Kawasaki/Hart Racing/Hot Shot-backed EX650 working his way forward after a slow start to the 8-lap event.

Sorting out the final qualifying spot in the heat behind BRob44 are Briar Bauman on the #14 Werner-Springsteen Racing/Monster Energy/Cometic-backed Kawasaki and Shawn Baer in his first appearance for the 2014 season aboard a new-for him #32 Baer Racing Products/KB 5/Kam's Performance-sponsored KTM LC8 950. Baer's first ride on his new KTM, after campaigning Kawasakis the previous two seasons saw him take the last direct transfer to the main.

If you are headed to Sturgis for the big rally in early August, you won't want to miss the Black Hills Half-Mile round of the 2014 AMA Pro Flat Track Grand National Championship, to take in the greatest racing on two wheels in the world for what will probably be the least expensive thing you purchase in the land of chrome and iron.

Tickets are only $25 in advance and $30 at the gate, and the full details on how to save some $$ by getting them before you get there are below thanks to AMA Pro Flat Track's press release.