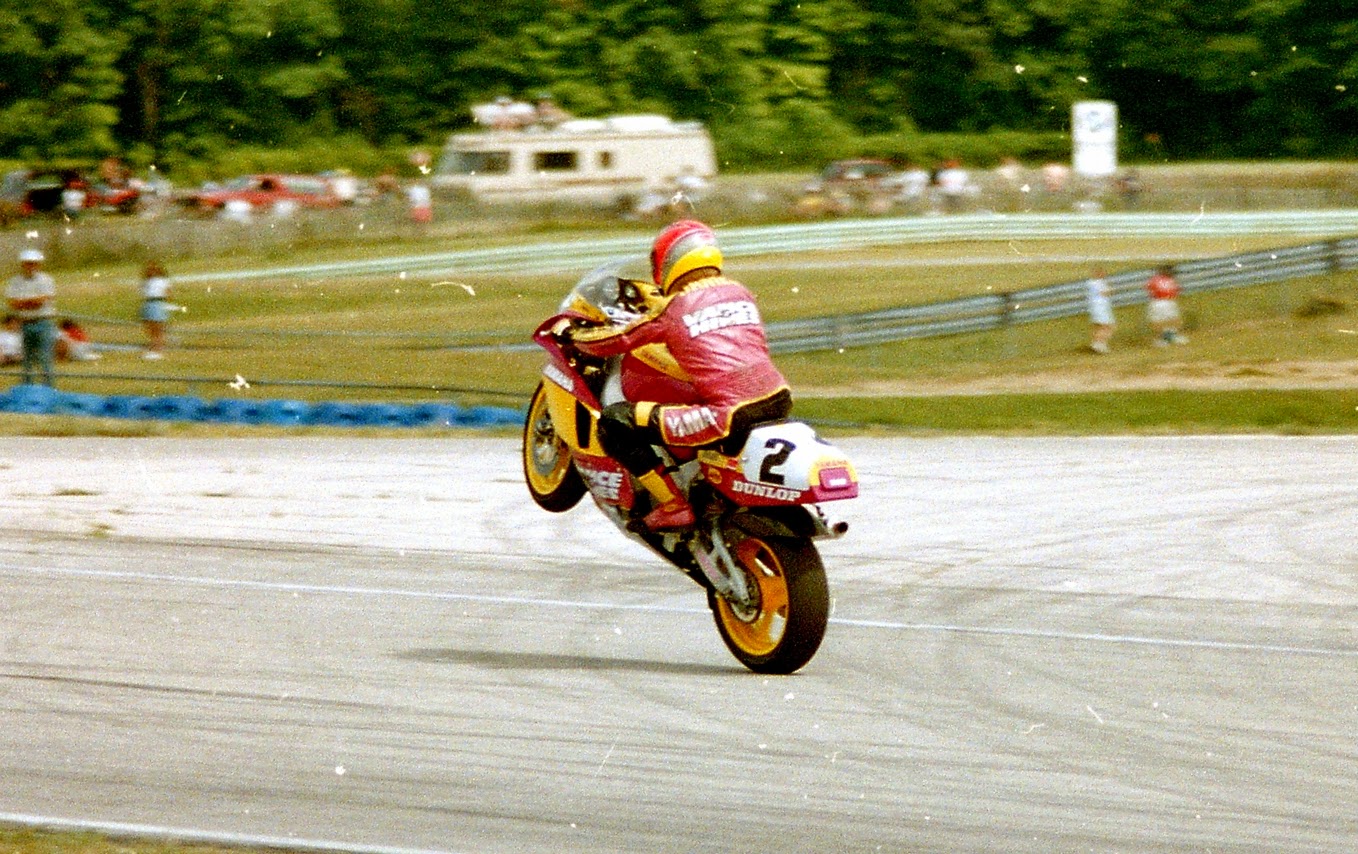 The seventh and final member of the 2014 AMA Motorcycle Hall of Fame class was announced today, and mega-tuner Byron Hines of Vance & Hines Racing fame will join the class that will be inducted at the ceremonies to be held in Orlando, FL. on October 17. Hines joins another super-wrench, Rob Muzzy, that was announced a couple of days ago, in the 2014 class.

Probably best known for his and his partner's (Terry Vance) drag racing prowess and winning ways, Hines and his partner also fielded a very successful AMA Pro Road Racing team in the AMA Superbike Championship Series starting in the late '80s and going on for the better part of the next 13-14 years. The team first fielded '90 Daytona '200' winner Dave Sadowski aboard Suzuki GSX-R750s in the late '80s before turning their focus into the Yamaha factory team at the start of the 1990 season. The team won their first race with Sadowski at the helm of one of their potent Yamaha 750s, and along with team mate Thomas Stevens also competed in the AMA 600 Supersport Series.

In '91, the team picked up '89 AMA Superbike Champion Jamie James to take over Sadowski's seat, and James took his first win for the team at Road America in June '91, with team mate Stevens winning the Mid-Ohio round in late July/early August to help seal the deal in his winning the '91 AMA Superbike Championship for the team. Stevens off-season signing with Muzzy Kawasaki for the '92 season was somewhat of a letdown for the team in not being able to carry the #1 plate on the front of their immaculately prepared Yamahas. The team added the late Larry Schwartzbach to their 600 Supersport and Superbike efforts in late '91 and for the '92 season, but Schwartzbach was critically injured during the running of the Mid-Ohio round in late July/early August and was taken off life support just shy of two days after the gut wrenching accident that occurred on the front straight at the Lexington, OH. facility.

The team then added '92 250GP Champion & future 2-Time World Superbike Champion Colin Edwards to the squad for the '93-'94 seasons, which saw Edwards catch fire at the Mid-Ohio round in mid '94 by winning it and two other races to close out the season. Edwards then moved on to helm Yamaha's World Superbike efforts for the '95 season.

In the shot above, James wheelies his #2 Vance & Hines/Dunlop/Bell/Bel-Ray Yamaha 750OWO1 during his victory lap after taking the win in the AMA Superbike round at the Coca-Cola Super Cycle Classic at Road America on June 30, 1991. James repeated the win for the team the next year at the 4.0 mile long facility located outside Elkhart Lake, WI. James also won a handful of races on the V&H 600 Supersport machine to claim the #1 title for them in the '94 season, and narrowly missed re-taking the Superbike crown at the season-finale round at Road Atlanta when a mechanical problem caused him to lose the championship by just a couple of points to rookie sensation & Australian, and future multi-time World Superbike Champion Troy Corser on one of the Fast by Ferracci Ducatis.

The team stepped away from the AMA Superbike Championship with Yamaha after the '94 season as Yamaha took their program back in-house, but the powerhouse duo of Terry Vance and Byron Hines kept on with their drag racing program in the NHRA. The duo has won multiple drag racing crowns over the decades dating back to the '80s when Vance was still the team's rider.

V&H returned to the AMA Superbike Championship in the mid-late '90s, this time fielding a team as the U.S. factory reps for the Italian marque Ducati, with Stevens and Australian Anthony Gobert as the team's lead pilots. Gobert caught fire and won a couple of races for the team, notably the '98 Road America round, before substance abuse demons caused him to lose his ride with the team during the '99 season. '98 AMA Superbike Champion Ben Bostrom, who had captured the crown via a very consistent season riding the factory Honda RC45s, and doing so without winning a single race, then signed with V&H for the '99 season, thus allowing the Vance & Hines team to finally be able to carry that coveted #1 on the front of their premier class machines.

With the class of 2014 now complete, Hines closes out what will be a stellar year of elected motorcycle racing folks to this year's honors. You can check out the full press release below courtesy of the folks from the AMA Motorcycle HOF, and we send a huge congratulations out to Byron Hines, another of the men who have dotted the history-making timeline of the AMA Superbike Championship along with Rob Muzzy who was just announced the other day. Congrats Byron and thanks for all of the great memories!

PICKERINGTON, Ohio -- July 10, 2014 -- Byron Hines, one of the most successful engine builders in motorcycle racing, has been elected to the AMA Motorcycle Hall of Fame.

"One mark of exceptional talent is the ability to forge success regardless of your circumstances," said Ken Ford, a member of the Hall of Fame executive committee and treasurer of the AMA board of directors. "As a tuner, Byron Hines has won in the 1970s, '80s, '90s and 2000s. He has won in drag racing and road racing. He has won on brands as different from each other as Yamaha, Ducati and Harley-Davidson. Few understand the ingredients to long-term success in motorcycle racing as well as he, and it's my pleasure to welcome Byron Hines to the 2014 class of the AMA Motorcycle Hall of Fame."

Hines, who was elected to the Design/Engineering category, will be inducted at the 2014 AMA Motorcycle Hall of Fame Induction Ceremony Oct. 17, in Orlando, Fla. The induction ceremony is part of the AMA National Convention being held in conjunction with the American International Motorcycle Expo (AIMExpo) Oct. 16-19. Tickets for the convention and the induction ceremony go on sale soon. Check back at www.motorcyclemuseum.org for updates.

"Being inducted into the Hall of Fame is a huge honor, but it feels a little odd because I'm not done yet," Hines said. "Being in a competitive arena, it seems like you're never done. You're going to keep doing what your doing and striving to be the best at what you do."

Hines said his attraction to motorcycles came at an early age.

"I just always liked the physical size of the motorcycle," he said. "Cars were too hard to work on and a lot of times you had to have someone with you to move stuff around. Also, I had this perception of motorcycles as being capable of a higher state of tune, and it was easier to make them go fast. To me, motorcycles just represented a more technologically advanced and capable package."

Hines took full advantage of those capabilities, as well as his ability to unlock them. He found early success as a young tuner in the 1970s when he joined forces with motorcycle drag racer and AMA Motorcycle Hall of Famer Terry Vance. The pair earned national drag-racing championships into the 1980s, along the way leveraging their on-track achievements into the successful aftermarket company Vance & Hines. The company branched into road racing in the 1980s, becoming one of the top AMA Pro Superbike teams, winning individual races as well as class titles, including the 1990 AMA SuperSport Championship with rider David Sadowski. In the late 1990s, they switched to Ducati and experienced further success with Anthony Gobert and Ben Bostrom at the controls. Today they compete in, and sponsor, the AMA Pro Racing Vance & Hines Harley-Davidson Racing Series, part of the AMA Pro Road Racing program.

Hines said that one element of his lasting success across disciplines and motorcycle brands has been an appreciation for the fundamentals of motorcycle tuning.  "There are principles of engine performance and operation that will always be there -- basic cam timing, compression ratios, cylinder head porting, the basic concept of how engines are put together," Hines said. "It's part of the same foundation that we all build upon. There's a certain set of rules, and you can't break those rules. As soon as you go outside those boundaries, your performance is going to suffer."

Vance & Hines, based in Santa Fe Springs, Calif., remains competitive in professional racing and continues to develop and sell aftermarket products for a wide range of motorcycles today. Hines is directly involved in all aspects of the business. "What have been most important to me are the people I've run into, the acquaintances I've made and the relationships I've maintained," Hines said. "I'm thankful to work someplace where everything just clicks, meeting the right people and having enough staying power to work out the kinks and have an opportunity to achieve what I want to achieve."