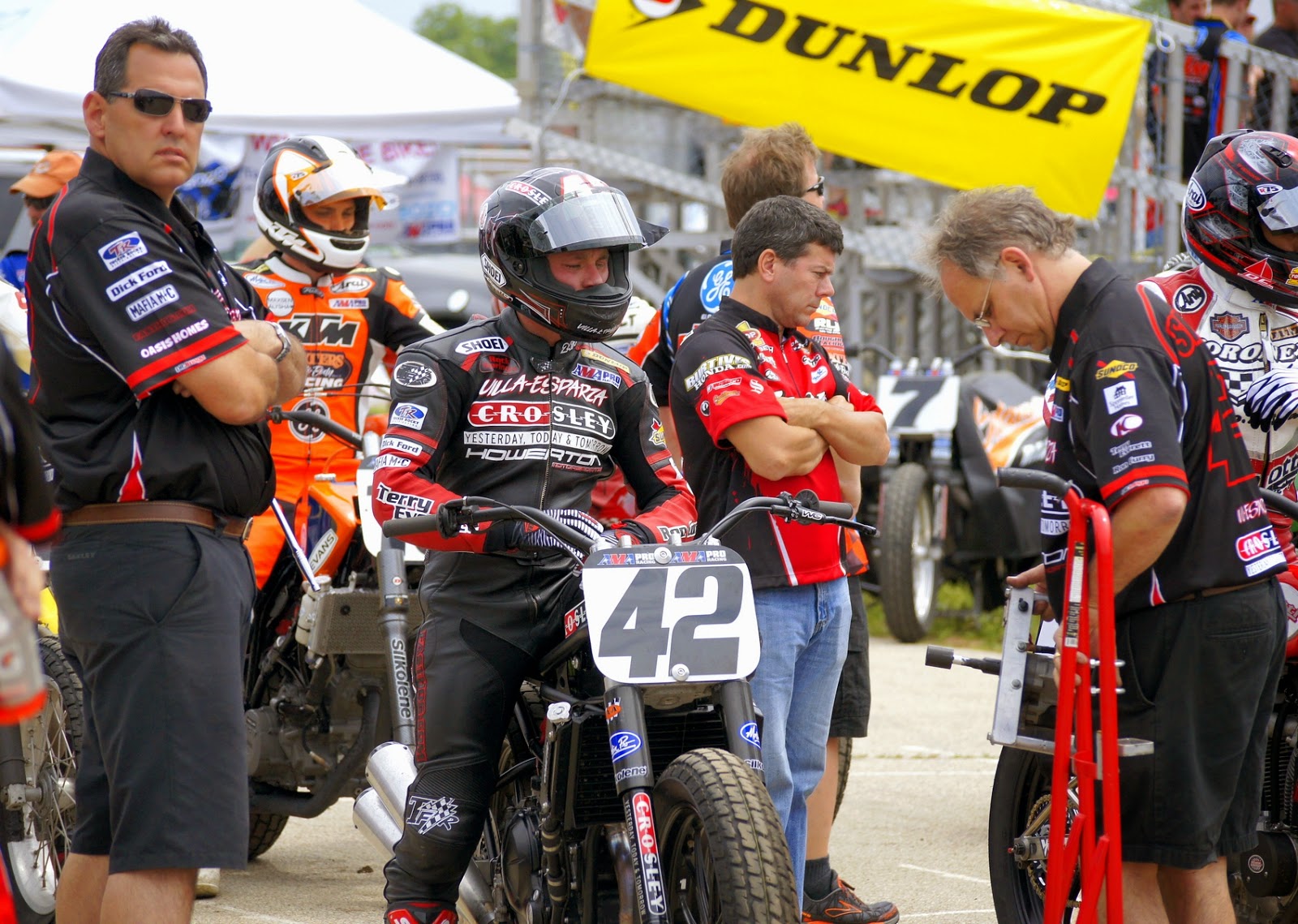 Bryan Smith has made history again in the AMA Pro Flat Track Grand National Championship after taking the #42 Villa-Esparza/Crosley Radio Kawasaki to the win at the Hagerstown Half-Mile on Saturday, July 5, in what was the first half-mile win ever for the marque and the first time since August '98 that any brand or model other than the Harley-Davidson XR750 has won on a half-mile track. Smith was also the man to take the brand to it's first-ever win on a mile oval while riding for the Werner-Springsteen Racing Kawasaki team when he took the win at the Indy Mile in August '10.

The 2-Time defending AMA Pro Flat Track Grand National Twins Champion, whose remaining team members revamped their efforts during the off-season after 2012-2013 team owner Rick Howerton decided to mothball his racing efforts in order to spend more time with his family, was running in a solid 2nd-place in the 25-lap National main at the Hub City Classic until the ninth lap when early leader and early season points leader Kenny Coolbeth, Jr. went out with a mechanical failure on the potent #2 Zanotti Racing XR750. From that point, Smith was able to hold off the charges of eventual 2nd-place finisher and new points leader Jared Mees on the #9 Rogers Racing XR to take the win and put himself and his team into the record books.

This was a great accomplishment not only for Smith, but for the team as well. After Howerton's announcement after the end of last season, the remaining core group of the original Howerton Motorsports team members banded together to set forth with their revamped efforts for the 2014 season.

The bike building itself was turned back over to Flyin' Bryan's father, Barry, out of their home shop outside Flint, MI. Barry, who is no stranger to putting together some powerhouse and pristine equipment, most assuredly welcomed that change as at times over the course of the last two seasons would appear to be 'bored' and out of place while the Howerton boys did all of the wrench spinning at all of the tracks, other then during the 2012 season when Barry still was behind the Moroney's H-D XRs that Bryan rode at the half-mile tracks.

Original team members Jeff Gordon and Ron 'Dink' Glidden took over the motor program out of Gordon's Speedway Engines shop, the company that puts together the lease engine program for the Indy Lights Series in open wheel racing. This compared to 2012 when the late Skip Eaken and his team were originally building the motors, and in 2013 when Howerton and Gordon took the engine prep in-house at Howerton's shop on Gasoline Alley Blvd., next door to Speedway Engines. Gordon and Glidden had been in on the majority of the engine development since the beginning, buying and procuring motors off of eBay and boxing them up under the work benches. And with the help of Dreyer Motorsports, Glidden's long-time employer and one of the team's original sponsors, were able to procure some needed and necessary dyno time in order to finely hone the EX650-based motors for use in Grand National racing.

Since Howerton 'owned' the original chassis set-up that started setting The Rolling Thunder Show on fire at their first event together at the Springfield Mile I in May 2012, and his plans were in place to mothball his designs, Gordon and the rest of the team worked on getting ahold of one of the more popular chassis that had helped to turn around Grand National racing in the last two years, and purchased a couple of the C&J-designs that a majority of the Kawi teams had been using. From there, it was a matter of putting it all together and heading to the track and putting it all to the ground.

In any of it's incarnations since 2012, the mile tracks weren't the big stepping stone. The team had a solid base to work on with two full seasons to go on, albeit with another chassis design. But it was still the half-mile tracks that were the tracks that were going to prove to be any of the Kawis weaknesses. Until now. Smith even stated in his podium interview that as slick as Hagerstown was it not only wasn't 'his type of track' but was also of the thinking that the Kawi wouldn't be suited well for the slick surface. Obviously he didn't give himself enough credit and as the saying goes, the rest IS history. Smith's and his' team!

In the shot above, three of the four main protagonists on the #42 Villa-Esparza/Crosley Radio/Howerton Products/Dreyer Motorsports-backed Kawasaki team are suited up and ready to roll for heat race #1 at the Springfield Mile I on May 25 in round 3 of the 2014 AMA Pro Flat Track Grand National Championship. Jeff Gordon, giving his usual 'what you lookin' at stare' as the shot is taken, Master Throttle man, Bryan Smith appears to be calm as can be just before going out to take the first win of the 'new' team's coming together, and Dink Glidden as he prepares to throw down the remote starter on the 700cc mount.

Larry Lawrence was on-hand to cover the history making event at Hagerstown, and filed this report in this week's Cycle News which you can revel in here.

After being curtailed for some time last year with health problems, AMA Pro Flat Track official photographer and Flat Trak Fotos.com owner Dave Hoenig is back at it again full time in 2014. It's great to see this master shooter back doing what he loves and does best, and he shot up some great action at Hagerstown which you can check out here.

And you can get all of the complete results from Hagerstown here thanks to AMA Pro Flat Track.

The season picks back up this coming Saturday, July 19 with the first-ever trip to Grays Harbor Raceway in the Pacific Northwest, what will be the home track to fast guys and popular riders Sammy Halbert #7 and defending AMA Grand National Champion Brad Baker, for the Grays Harbor Half-Mile, round 7 of the 2014 AMA Pro Flat Track Grand National Championship season, and the fourth half-mile event of the year.

And you can catch the official version of the race, as well as the links to the archived race footage below, again thanks to the great crew at AMA Pro Flat Track and FansChoice.tv as we get ready to see the series hit the meat of the sandwich next weekend with the first of eight races in the next seven weeks in the greatest racing series on two wheels in the world.

Smith gives Kawasaki its first ever victory at Hagerstown