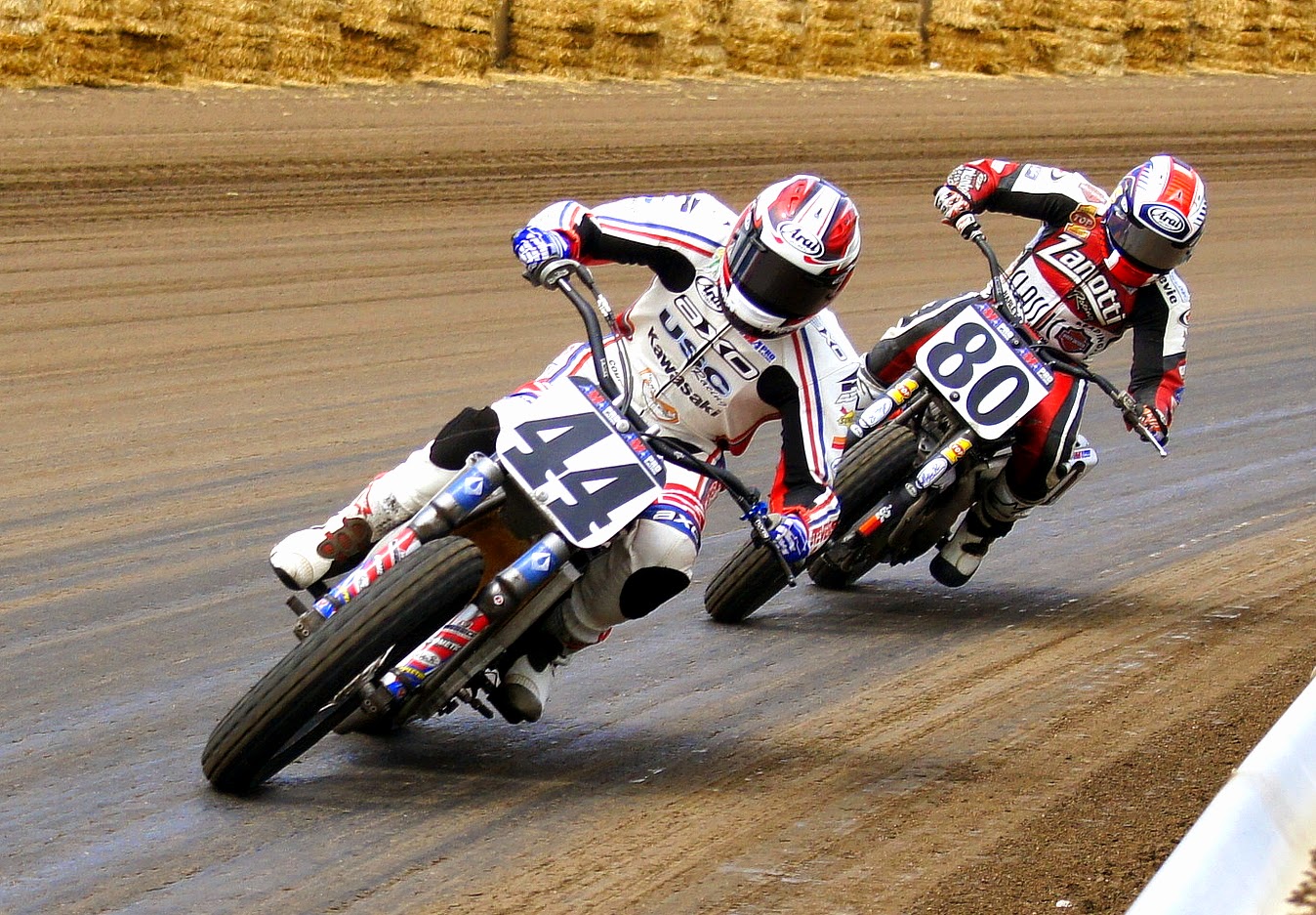 Brandon Robinson took another big step last week at round 5 of the 2014 AMA Pro Flat Track Grand National Championship season to improve on his great finish to last season by taking the #44 USC Kawasaki/Hart Racing EX650 to a strong 2nd-place finish at the Lima Half-Mile.

BRob44, who ended the 2013 season as the 3rd-ranked rider in the nation with three wins on the season, also scored his second podium and third top-5 of the season at the Allen County Fairgrounds-hosted event, a track where in his last outing saw Robinson land on his head when a flat tire on the Werner-Springsteen Racing Kawasaki put him over the top and into cushion (mostly unhurt, thankfully) coming into turn 3 with just over five laps to go in 2012.

With the season still young and the series hitting the Hagerstown Speedway round today in Maryland, Robinson moved into the 4th-place spot in the overall standings.

In the shot above, Robinson works his way to the front on the #44 USC Kawasaki/Hart Racing/Hot Shot-sponsored mount after passing Stevie Bonsey on the #80 Zanotti Racing/Classic H-D-sponsored XR750 during heat race #2 at the Springfield Mile I round of the season on May 25.

You can check out what Robinson had to say about his stellar effort last week in Lima below, and we send a big thumbs up out to the former 2008 AMA Pro Flat Track Basic Twins Champion as he gets ready to improve on his 17th-place finish at last year's Hagerstown Half-Mile. Go get 'em man, ride fast and ride safe!

Hey Everyone,
Last weekend was the Ohio National in Lima, OH.  Typically I tend to really struggle at this race and on most cushion surfaces, but I was looking forward to it as we were riding a new bike that we have been testing.
The day started off pretty decent as I qualified 8th in free practice and in both qualifying sessions.  I really liked how it was super deep and rough, but quite a few riders felt it was unsafe and AMA decided to take a grader out to take some of the cushion off.
I was in the third heat race and was able to grab that all important holeshot!  It was nice having a clear track, but I was struggling a little bit and slowly faded to eventually finish 3rd for a direct transfer to the main.
My team and I kept thinking about what changes to make as I felt good, but not great.  As we talked things over, my tuner James along with the support of Dan Thompson and Carl Patrick devised a game plan for the main.  I wasn’t really sure what to expect for the main event with all the changes we made, but I figured I’d give it my all and see what happens. 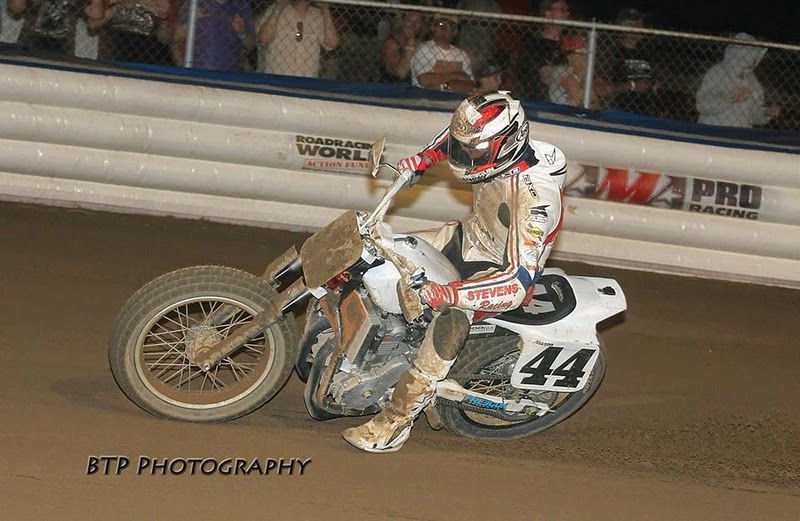 Brandon Robinson on the #44 USC/Hart Racing Kawasaki is shown in route to his best finish of the season at the Lima Half-Mile on Saturday, June 28. Photo courtesy of Brandon Robinson/USC Racing by Brent Pierce/BTP Photography.
I got a decent start and noticed right off the bat the bike was better and I was able to find some smooth lines.  Besides my near crash on the first lap I was able to put together a really consistent race and at the conclusion I found myself in 2nd place!  Honestly I was pretty shocked as I usually struggle on cushions, but to get out of Lima on the box was awesome. Talk about being stoked!
As of now we are sitting 4th in the Grand National Championship heading into my home race this weekend in Hagerstown, MD.  Can’t wait to hop back on the bike and keep this momentum rolling.  As always thanks everyone for your support!
Podium Recap Video - https://www.youtube.com/watch?v=K4XIdbNgv_0&index=2&list=PLY7CVMpwTxs72fH4YkISQkrW6wPVsebeF
Near Crash Video - https://www.facebook.com/photo.php?v=702463396491668&set=vb.125895807481766&type=2&theater
Thanks, B!
Brandon Robinson - GNC 4415 Wood Valley LaneOxford, PA 19363484-888-9485
Website:  BrandonRobinson44.comTwitter:  @BRob44Instagram: @BRob44Facebook:  Brandon Robinson
Sponsors:
USC Kawasaki, James Hart, Hot Shot Motorworks, Stevens Racing, R&D Machine, Arai, ATI Physical Therapy, Penske Shocks, AXO, Go Pro, Saddlemen, Pro Plates, Motion Pro, Royal Publishing, VC Graphix, KK Motorcycle Supply, Hartman Photography, Modotek, PMP Sprockets, Spectro Oils, Wiseco Pistons, Cometic Gaskets, Lectron Carburetors, Evans Coolant, Freegun, Marmor Fitness, G2 Ergonomics, West Coast Hot Shoes, Works Connection, K&N, Impact Armor, Built Clothing, Spider Grips, Spy Optic, WKR, Race Tech, Jim Chapman, Tom Scibek, John Y, TJB