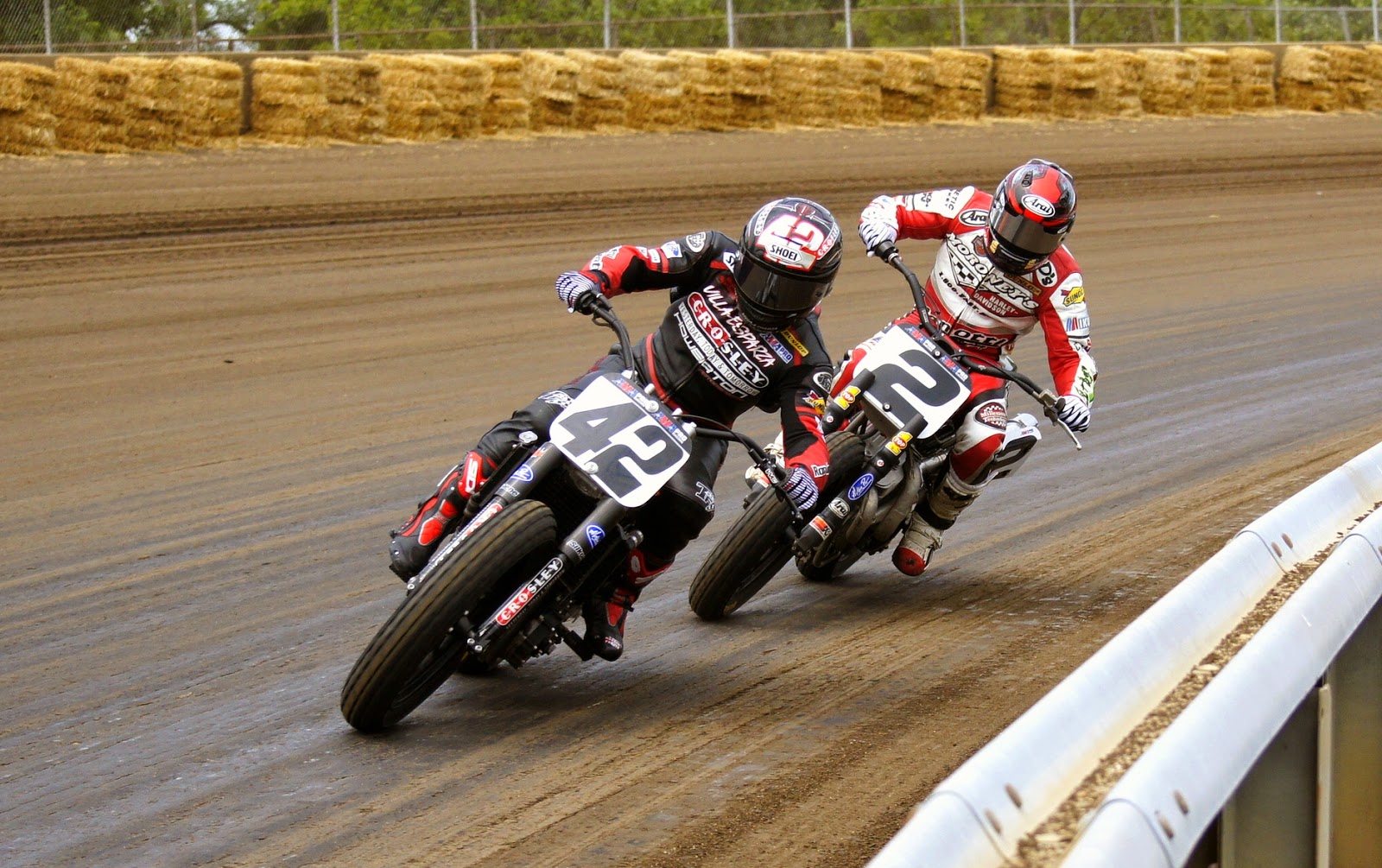 Bryan Smith put his name in the record books again last night after taking the #42 Villa-Esparza/Crosley Radio Kawasaki to the win in round 6 of the AMA Pro Flat Track Grand National Championship at the Hagerstown Half-Mile, the first-ever win for Kawasaki on a half-mile track. Smith had previously given Kawi it's first-ever win on a mile oval when he took the Werner-Springsteen Racing Kawasaki to the win at the Indy Mile in August 2010.

In what was a long-time coming, the Michigan rider won his heat and the Dash for Cash on the Jeff Gordon/Dink Glidden-tuned and Barry Smith-built mount and then led laps 9-25 after early leader and early season points leader Kenny Coolbeth on the #2 Zanotti Racing XR750 went out after leading the first eight laps of the 25-lap National main.

Jared Mees, who had won the previous week at the Lima Half-Mile, tried to reel in Smith but came up just over .8 seconds short at the checkers, but due to Coolbeth's misfortune, inherited the points lead by just a single point over last night's 6th-place finisher, Jake Johnson on the #5 Lloyd Brothers Motorsports XR750 (104-103), with Coolbeth now in 3rd-place in the championship battle (99 points.)

Last year's AMA Pro Flat Track Saddlemen Rookie of the Year, Jake Shoemaker, took his #55 Montgomeryville Cycle Center Kawasaki to the final spot in the podium to make it his second year in-a-row to finish on the podium at Hagerstown. Brandon Robinson on the #44 USC Kawasaki and Sammy Halbert on the #7 South East H-D XR rounded out the top-5.

Of note, Henry Wiles took a provisional start after an early rough evening of 5th-place in his heat race and a 16th-place finish in his semi, to turn his evening around on the #17 Don's Kawasaki EX650 to garner an 8th-place finish and what very well could have been the ride of the night coming off the back row of the 19-rider National.

In the shot above, Smith on the #42 Villa-Esparza/Crosley Radio/Howerton Products-sponsored Kawasaki EX650 leads Kenny Coolbeth, Jr. on the #2 Zanotti Racing/Moroney's H-D/Burt Ives Honda-backed Harley-Davidson XR750 during heat race #1 at the Springfield Mile I on May 25. The two went on to finish 1-2 in the National main at the Illinois State Fairgrounds mile oval to start off the Twins Series season over the Memorial Day weekend.

The series has a two-week break before heading to the Pacific Northwest to do battle at the Grays Harbor Half-Mile on July 19 in the series first-ever visit to the track located in Elma, WA. for round 7 of the 2014 AMA Pro Flat Track Grand National Championship.

Cycle News' Larry Lawrence was on hand last night and filed this race report from the record setter at the Hagerstown Speedway, and you can also check the full results here thanks to the great folks on Fentress Blvd. in Daytona, the home of AMA Pro Flat Track.

As you read the press release below from AMA Pro Flat Track, we want to extend a big shout out to all of the cast and crew from the #42 Villa Esparza/Crosley Radio/Howerton Products Kawasaki team, including super wrenches and motor builders Jeff Gordon and Dink Glidden, and master bike builder Barry Smith (Bryan's hard-working and tough as nails father) for their great win last night, and to the man that helped get this program started some three years ago by building and putting together the great group of guys on this team, Rick Howerton, and for his vision and long-time determination and dream of building a machine to contend in The Rolling Thunder Show. Great job by all and you really deserve this great win to add to your first-ever win together at Sacramento three seasons ago and to your two AMA Grand National Twins Series Championships over the course of the previous two seasons that set the bar rolling for what you attained last night. Bravo!